No, that’s not a hyped up title. It’s very much a fact. Google has managed to show some consistency in the way they want to handle their brand new flagship smartphone, the Nexus 4. For a company which, for many, is synonymous with Internet, the whole experience from pre-announcement to launch to relaunch, everything has been extremely amateurish.

Rewind back to 17th October 2012. Google announced that they’re holding an exclusive Android event in New York on 29th October, the very same day as Microsoft’s WP8 Launch. Many, including Microsoft insiders saw this as silly and deliberate. By that time everyone knew nearly everything about what they’re going to announce on 29th Oct. Two weeks later, they had to cancel the event in NY, thanks to Hurricane Sandy. But the announcements did come via a press release. 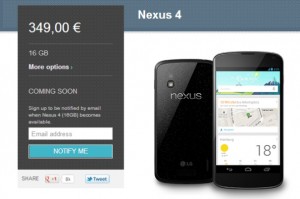 Forward two weeks to November 13th, the day Google had decided to let Nexus 4 go on sale in several countries across Australia, Europe & America. Google didn’t care to let people know when exactly it’d go on sale, and shockingly enough, they didn’t even send out the email notifications which they had promised to those who had subscribed to be alerted. Once the page went live, customers in Australia, UK and Germany complained about faulty payment systems. The devices were sold out in minutes everywhere, but Google was dumb enough to keep showing “Coming Soon” message.

The hell broke loose when the Nexus 4 page went live in US. Within a span of few minutes, Twitter was abuzz with cries and swearing of people going mad with faulty payment systems and weird errors being thrown everywhere. 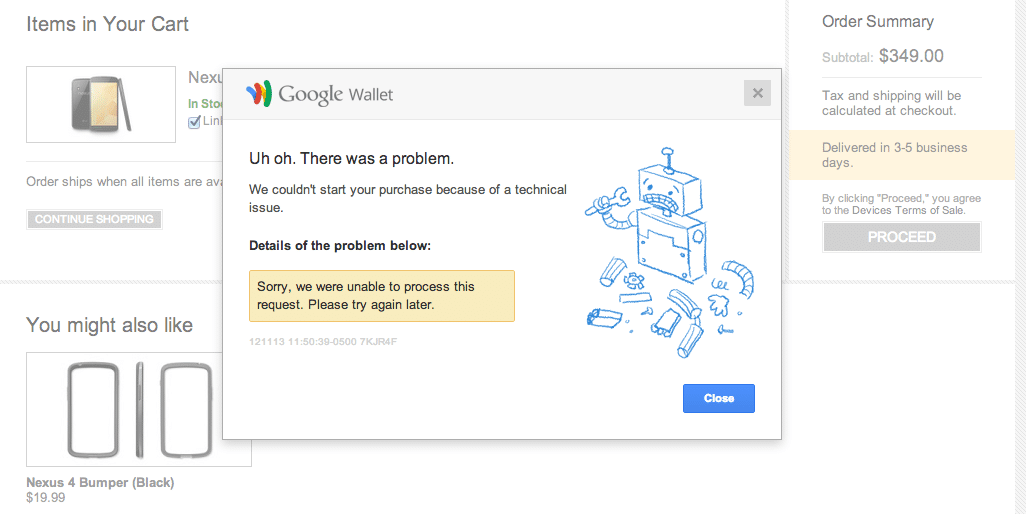 So basically, Google managed to insert errors (with no information embedded whatsoever) in every single step of purchasing. Though some people cried foul for the pathetic experience, many others gave Google a benefit of doubt. The obvious reasoning was Google didn’t anticipate this huge demand and hence didn’t prepare well. End of the day, just a few lucky ones (we don’t know how many) ended up ordering a device (or multiple devices) in spite of encountering the errors along the way.

A lesson not learnt

Fast forward two more weeks. Much to the delight of wannabe Nexus buyers, Google notified the subscribed users about Nexus 4 coming back on sale (in US alone) on 27th November, at 12pm PST. Many people (like me) were happy to see this and honestly wondered if Google has learned its lessons from two weeks back.

By notifying subscribed customers about Nexus4 going on sale today, Google has got the first step right. Now get the rest right as well pls

Not to be. Google managed to shock us all by providing consistent and near identical experience of buying a Nexus 4. Yes, history got repeated all over again. The same errors, the same abuse of refresh keys and the same end result – just a few lucky ones to get through the payment hurdles.

Why Nexus 4 launch is a disaster?

David Ruddock, of AndroidPolice, make some great points in his editorial on this very same subject.

One can understand the issues with handling possibly the second most popular smartphone launch, but being a company which takes pride in its web services, and aims to be a force with payment systems in the near future, Google has simply ended up being a company whose enthusiasm to change the world goes beyond the expertise and preparedness to achieve something much simpler.

How to Always Launch Google Chrome in Incognito Mode
How to use Back Tap on iOS 14 to launch Google Assistant (or…
Google Pixel 6a India Launch: Specs, Price, Offer Details
How to Always Launch any Web Browser in Private…
PowerToys Run: Find and launch apps with Spotlight for…
Xiaomi Mi Watch teased ahead of its November 5 official…