Ubuntu, probably the must used Linux-distribution platform for desktop has long craved to reach smartphones. Since February last year, when the Ubuntu for Android project was first announced, people have dreamt and wondered how would a fully open-source platform look on a every-day mobile phone. Now, thanks to the ambitious minds at Canonical, a team supporting Ubuntu developers since 2012, evolution is one step closer.

Earlier today, Canonical has made official that a fully-featured Ubuntu sibling will arrive on mobile devices, hopefully, until the end of the year. Until then, developers and enthusiasts of all kinds get the chance to play with a minimalistic demo which will be made available for Android platforms. What is more important than pure dates and crumbles for birds has been already given in full, and today we are going to explore the options, potential and limitations of Ubuntu’s mobile OS. 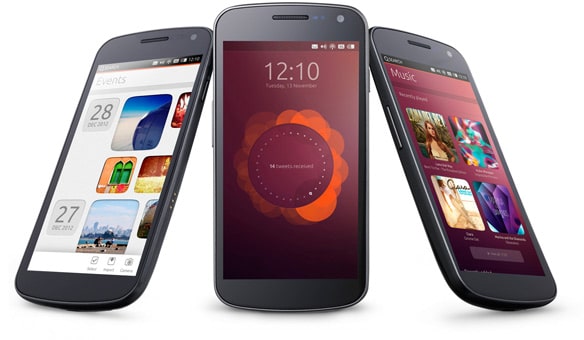 Ubuntu for Phones is the treasure that we are all going to wait for in the last quarter of 2013. This is the full state project, which should be made available to the wide public on dedicated smartphones, just like Android and iOS are today.

Although built around the existing Android kernel and drivers, but without using Java’s Virtual Machine, Ubuntu’s mobile OS promises to make use of existing hardware like no other platform on the market. Built with both compatibility and performance principles in mind, Ubuntu Mobile OS will support ARM and x86 processors, while allowing developers to port existing Android application without much fuss.

After using Android and iOS a while, I’ve found that although Google has the advantage of almost-limitless exploration and an opened mind for customization, it lacks the good design principles of Steve Jobs and the rapidness of interface, especially when pairing the OS with vendors such as Samsung, HTC or Motorola. Well, Ubuntu wishes to stray away those drawbacks, by designing a user interface easy to use and elegantly to explore. 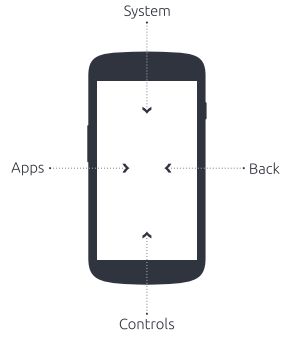 Navigation in Ubuntu for Phone will be done mostly through swiping gestures, buttons and other hard elements like that being left on the second place. Just like in Windows 8, developers have taken advantage of screen edges when designing Ubuntu, each and every one of them being used in order to move faster and select content more rapidly. As a brief intro, here are the most important to know gestures: 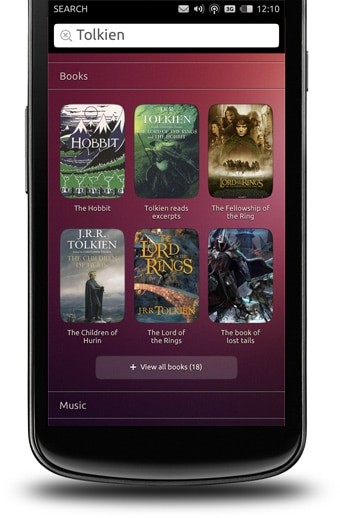 Ubuntu for Phone comes with a fully-integrated search system, similar to the one created by Apple & Google. Using this feature, people will have the ability to find elements across all media, including the web, social services, contacts and the device itself. For instance, if one is looking for a person, Ubuntu will display results from email and phone contacts, alongside Facebook friends and Twitter followers; that’s unless it’s Tolkien the one queried!

Another remarkable item is the Lockscreen, which will automatically blend with the phone’s welcome screen and present useful information at the same time. As developers suggest, this information will not strictly resume to basic elements such as the number of missed calls or unread messages, but also to the amount of time slept or how far you’ve traveled – a feature possibly inspired by Google Now’s Cards.

A clever Notifications Center can also be found in Ubuntu, where users can reply to various conversations, deployed by Facebook, Twitter and even Mail clients, without actually accessing dedicated applications.

Moreover, all pictures taken with the upcoming mobile system will be automatically uploaded by the Gallery application onto Ubuntu’s cloud, using an individual Ubuntu One account. Using this account, owners will have the ability to access these file from other devices and other platforms, including iOS, Android and Windows.

Le coup de grâce comes as the advanced voice control feature, which will allow users to effectively open applications or issue commands. Briefly, thanks to Ubuntu’s HUD (head-up display) option introduced in 2012, owners can type or say the command they want to carry out instead of actually going through different menus for the same thing. 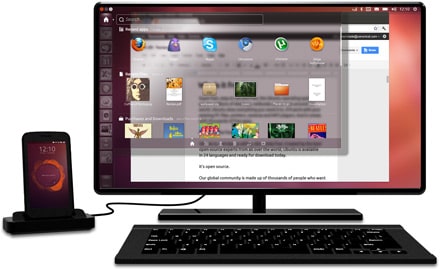 When Samsung started the Galaxy line, it chose the proper name for a suite of devices that were meant to sell all across the world, under various carriers and without strict limitations and fees for exclusivity in mind. Following the lines of the same principle, Ubuntu aims to win the support of the market by delivering itself in an appealing package for carriers and OEMs.

Firstly, Ubuntu will allow operators to customize the platform with their own services, content, applications and branding, without affecting compatibility with other applications. In other words, Ubuntu hopes to be seen as the first choice when it comes to vivid distinction between device makers, in a market where Android sells big for allowing vendors to create their own UI (whilst Microsoft permits little tweaks).

Moreover, the platform is compatible with both ARM and Intel x86 architectures, and due to the fact that the core system (kernel) is built around a typical Android Board Support Package, companies that make Android devices can adopt Ubuntu without much deviation.

Secondly, Ubuntu will make advantage of the million of users of its desktop platform, by supporting phones as docking stations. Following the principles widely introduced by Motorola Atrix, high-end Ubuntu smartphones will have the possibility of becoming fully-featured PCs thanks to a docking mechanism, which is yet to be described.

Although designers have something USB-based in mind, they give free will to vendor minds and hope that laptop/phone solutions will spree endlessly. This expanding feature will only be available to high-end Ubuntu devices, described in the table below:

Last but not least, Ubuntu will take advantage of its existing tricks and unite the mobile, desktop and TV platform under the same roof. This way, the platform will co-exist across all systems and file transition will be easily made through the use of Ubuntu’s cloud. 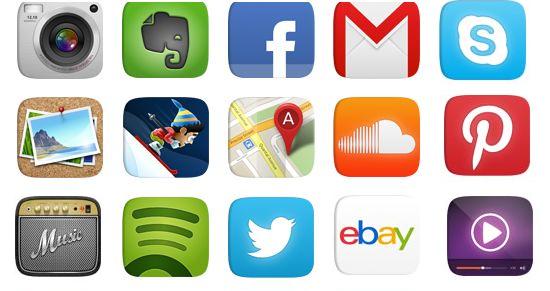 Ubuntu comes with a suite of integrated applications, such as mail, navigation, clock, camera, notes, texting and so on. Besides these few, developers have the possibility of creating unique titles, of porting applications right from Android or, with a little tinkering, of making native clients for web services.

Using HTML5 technology, services such as Facebook and Twitter can be easily converted into web application which can be mounted right on the homescreen, alongside native apps. Moreover, Ubuntu uses QML and frameworks like PhoneGap to allow easy porting of titles already found on other mobile platforms. Canonical’s CEO made a bolt statement by saying that games on Ubuntu for Phones will actually run by 15% faster than on other mobile platforms. He also cared to mention the following:

Ubuntu is well-established in terms of design excellence, community participation and partner adoption. That ecosystem is a natural fit for mobile devices

Perhaps the most interesting feature is that when developing the code, programmers may opt to build applications for every form of Ubuntu (desktop, mobile and TV), because the operating system will become a singular form, pretty much like Microsoft has combined Windows 8 with Windows Phone 8.

Was this article helpful?
YesNo
TechPP is supported by our audience. We may earn affiliate commissions from buying links on this site.
Read Next
How to Fix Google Chrome Translate Not Working
#android #google #mobile #Ubuntu