The Apple rumor mill never sleeps. And we aren’t the ones who care much about these rumors, except when we see some mettle behind the hearsay or the idea to be interesting. This time, it’s the latter.

One of my favorite tech writers, Brian S Hall, had predicted (back in Nov 2012) that Apple will be forced to release a much bigger iPhone this year, owing to the pressure applied by ever-growing Galaxy series of Android smartphones by Samsung, which are getting bigger and better by the day. Apple has always resisted bigger screens for the iPhone, as they hamper “single handed operation”. Well, they had also dismissed smaller iPads, till they announced iPad mini late last year.

Now, some Apple bloggers have woken up to the reality. Marco Arment, the creator of Instapaper, and a well-known Apple blogger, is predicting a 4.94″, 16:9 screen iPhone phablet, which he calls – iPhone Plus. He uses John Gruber’s theory of predicting the size of iPad mini.

The iPad Mini uses iPhone 3GS-density screens at iPad resolution. What if an iPhone Plus used Retina iPad screens with iPhone 5 resolution, keeping the rest of the design sized like an iPhone 5?

Here is a mockup of iPhone Plus next to iPhone 5, as created by Marco Arment. 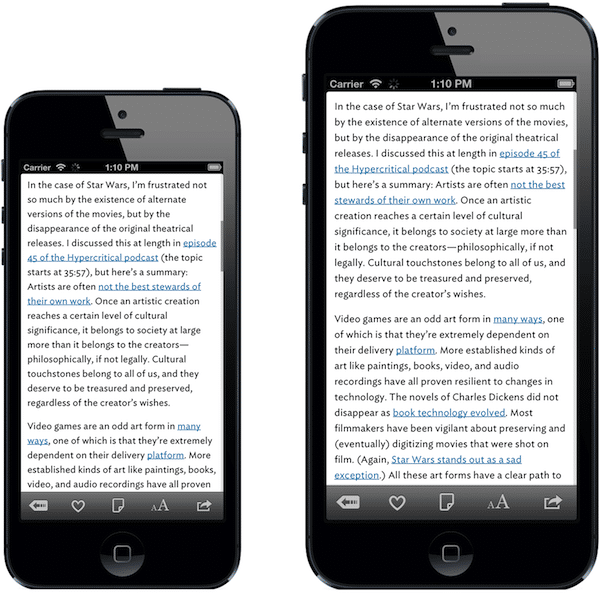 Marco argues that with 4.94″ screen and same pixel dimensions as iPhone 5, no app changes would be necessary. If at all Apple decides to come out with a phablet, it’ll be a huge step-down from their “one-size-fits-all” approach. There was a time when Apple almost dictated market trends. Though there were full-touchscreen smartphones before 2007, it was iPhone which made it to the mainstream and a norm. Apple (and Steve Jobs) single-handedly killed Adobe Flash on mobile devices. They made iPad synonymous with tablets, and popularized the concept of App Stores.

Things have changed. This time, the market is leading Apple. Biggest screens are a rage, specially in Asian countries. When I was in Hong Kong, back in April 2012, I used to see as many Galaxy Note phones as iPhone 4S on the Metro trains. With Galaxy Note 2 and other phablets, it has only gotten better. Apple can no longer ignore the market needs. They did a good thing by backtracking on ‘no smaller iPad’ stand, and I believe, they’ll do the same with bigger iPhone as well.

As Brian (and now Marco) predicts, Apple will release two new iPhones this year. One will be the 4-inch iPhone 5S. The other will be a much larger device, a phablet. This is not that typical Digitimes rumor, although they are saying the same thing this time. Let’s clear & lengthen our pockets to welcome iPhone Plus.

Was this article helpful?
YesNo
TechPP is supported by our audience. We may earn affiliate commissions from buying links on this site.
Read Next
With Football Manager 2023 Touch, Apple Arcade finally has its “killer ...
#apple #iPhone Note #iPhone Plus #Phablet #rumor