Withstanding harsh conditions and providing top-notch performance is not an easy thing to do, especially when the object in question is a small, highly portable tablet. While the trend has been mainly started by those who need a smartphone while working in dangerous conditions and with threatening factors, rugged tablets have also become a thing of need.

The quality and sheer hardness of a rugged tablet depends on its maker and on the purpose served by the product, but we’ve come to learn that most needs can be filled. On today’s ongrowing market, manufacturers strive to beat the competition by developing options that are both fast, smart and very hard to break. Depending on the taste, one can purchase devices able to withstand elephant stomps and to outwit past-generation computers, at the same time.

The Most Resistant Tablets in the Wild

As the very beginning, even the best rugged tablets looked like huge bricks with a touch-display attached on top. These beasts literally weighed more than a conventional 17-inch wide laptop from Alienware (which is a tough thing to beat). Nowadays, with technology getting smarter each second, some manufacturers were able to pass by impediments encountered when fortifying a tablet and launch great products. I am speaking about slates slim enough to be considered appealing, while being able to survive harsh conditions: 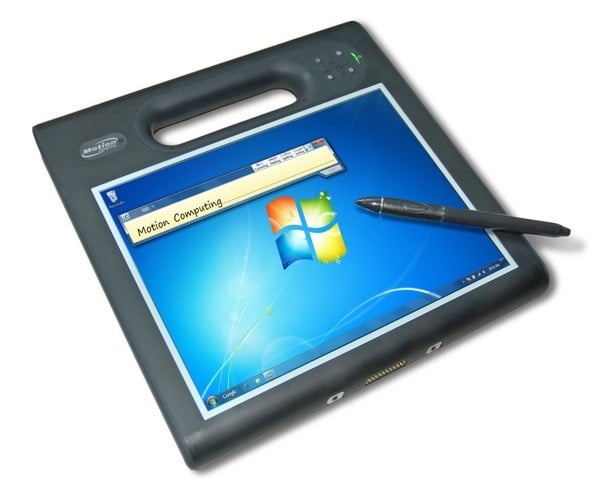 Introduced back in August 2012, the Motion F5T and C5T were two ideal solutions for someone who needed to get some real work done. Coming with Windows 7 out of the box, the units can be upgraded to the latest Microsoft version and can also be configured before purchase, specs wise. Speaking of insides, Motion allows buyers to integrate any 3rd generation intelligent Intel processor (that’s an Ivy Bridge i3, i5 or i7) and to pick between a 64GB or 128GB solid-state-drive. Also, the RAM amount can be chosen up to 4GB.

When it comes to field-work, the Motion F5T and C5T tablets have an interesting and fairly easy to use design, with a 10.1-inch touchscreen display that can read both tactile and pen–generated inputs, at the same time. Moreover, its fairly light body of just 3lbs will allow the unit to be used in most environments, without producing any strains.

Speaking of special features, these rugged tablets come with a sealed body that can withstand moisture, dust, chemical factors and low-charge shocks. The package comes with quite a lot of optional accessories, including a 2D barcode scanner, hot-swap battery feature, smart card reader, GPS and even more.

At the time, these two Motion products are bit hard to find on the market, but a quick peek on Amazon reveals that the starting price is set around $925 (one which increases with every new option added). 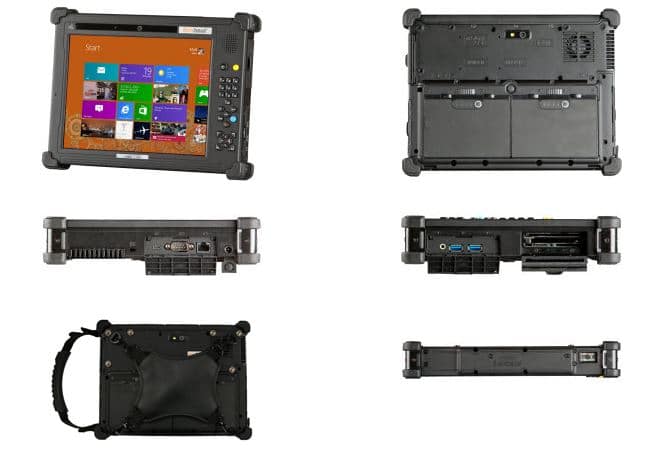 Xplore Technologies, a manufacturer widely known for its resistant gear, has taken a plunge into the rugged tablet sector a couple of years ago. Today, their most impressive products can be found as the iX104C5 family, which is a series of slates able to withstand harsh conditions while providing quality performance.

While most members of the family come with the special feature set presented below, the series is made out of 4 tablets with different technical specifications but with a slim, user-friendly design. Usually, all members have an Intel i7 processor with Turbo Boost and Windows 7 (or 8) as the main platform. Storage is usually provided by a size-changing solid-state-drive which can be matched with an RAID 0, 1 option.

The iX family is a very tough one, with each and every product being able to survive 26 repeated drops from 5 feet heights, directly on concrete. Thanks to the lightweight magnesium alloy body, the tablet can be used in zones with 95% humidity and in temperatures ranging from -20° C to +60° C. The sealing is IP65 compliant, or impenetrable to cleaners and liquids, in plain English. As a matter of fact, some members of the family can stay up to 30 minutes submerged and even operate in explosion-prone areas without taking damage.

Prices are only available on-demand, and buyers have the option of a free 15-day trial. 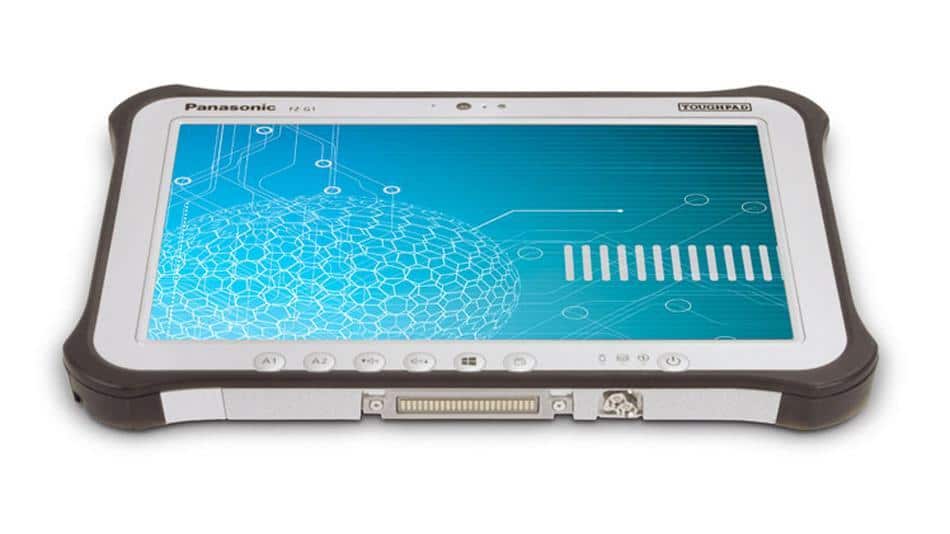 The ToughPad A1 from Panasonic is perhaps one of the most important members in the rugged tablet history. Amongst the first manufacturers to blend some resistant features into a consumer tablet, Panasonic has managed to create quite the boom with this well-advertised solution. Launched last year, the A1 was a strong and durable slate, packing a dual-core processor clocked at 1.2 GHz and Android 4.0 on-top. Its slick, thin and appealing body made it a perfect choice for the clumsy, or for the married.

In January this year, Panasonic has introduced two other rugged tablets, the ToughPad FZ-G1 and JT-B1, as direct sequels to the wonderful story. The first member of the family was described as being the thinnest and lightest rugged Windows 8 tablet on the market, with a 10.1-inch IPS display which could be used even by Dennis, the Menace.

Inside that beautiful tough shell you will find a 3rd generation Intel Processor of choosing, a 3G/4G antenna and other interesting features, such as a replaceable extended battery, cradle dock, stylus and a 360-degree handle case. Pairing all these under one roof will offer a 120cm shock resistant product, which weights around 2.4 pounds and can be submerged for 30 minutes.

ToughPad JT-B1, the second member of the series, sports a 7-inch display that can render content in 1024×600 resolutions using the modest 1.5GHz dual-core processor. The unit also comes with 1GB of RAM, 16 GB of built-in storage and the ability to extend that number using a microSD card. Interesting enough, the JT-B1 runs Android and has a 13-megapixel camera on the back side.

Both products are resistant to drops, fluids and extreme temperatures.

When it comes to the price, you’ve be surprised to find that the bigger, Windows 8 FZ-G1 will set you back around $2900 and the Android sibling just $1300. 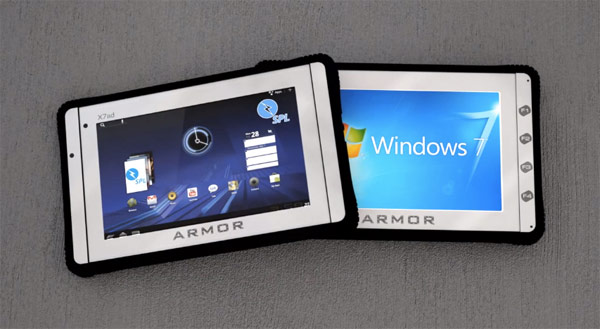 DRS Armor has leaped from its army-specific equipment bounds now serves also regular clients, thanks to two slim tablets, the X7AD and X7ET. The firs member of the crew sports a 7-inch WXGA display with HD resolutions and Android 3.2 as the operating system. Powered by a dual-core Tegra 2 processor clocked at 1.0 GHz, this slate comes with the usual mini USB and HDMI ports, while integrating some special sensors. At 1.3 pounds, this light product can squeeze around eight hours of battery and enough performance to keep you focused.

The Windows-minded brother, DRS X7ET, comes with an Atom Z670 processor clocked at 1.5 GHz and a design line just like the one used in the Android flavor. On the inside, you will find around 40GB of on-board storage, implemented with solid-state solutions, and the usual connectivity features.

Both models can survive in extreme temperatures and in humid environments, even when dropped from 122cm directly on concrete. Hard surfaces are not the only perils ignored, as both stubs are IP65 compliant, meaning resistance to direct dust, salt and a keen mind for diving. 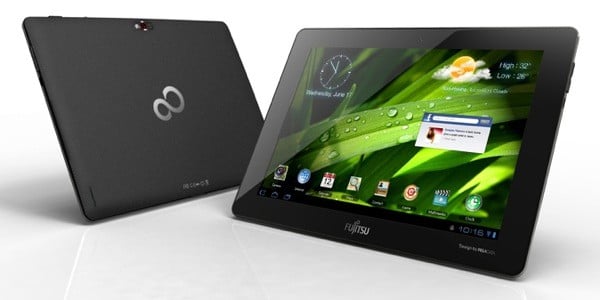 Fujitsu also found itself in the market of rugged tablets with the Stylistic M532, a slate introduced in the USA more than a half of year ago. Bearing Android 4.0 and a quad-core Tegra 3 CPU clocked at 1.4 GHz, Stylistic offers great performance under a nice, resistant design. Selling for $449, the Stylistic M532 tablet comes with a 10-inch wide screen capable of rendering content in 1,280 x 800 resolutions and 32 GB of built-in memory

When it comes to protection, Fujitsu developed a product resistant enough to absorb small shocks from most directions and withstand medium showers. Also, as a bonus, Fujitsu offers a one year international warranty period and free subscription to a theft tracking service. 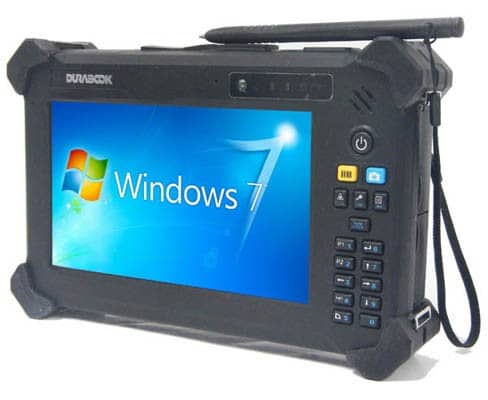 The T7Q from GammaTech is one of the most resistant units we’ve ever laid eyes on. Mainly used in transportation, field services, utilities, oil and gas industries, this bulky unit comes with a 7-inch wide touchscreen capable of surviving harsh conditions and of rendering useful content, in the field. Performance wise, the T7Q is a modest unit which packs an Intel Atom Processor, an mSATA SSD and a back-camera of 5-megapixels.

When it comes to connectivity, the slate can pack a bar-code scanner, an RFID reader, GPS receiver and the usual USB/Ethernet ports.

The GammaTech T7Q can survive 26 drops from 60 inches directly over concrete without taking much damage, thanks to its shock resistant enforced body. Moreover, marks will not be seen even when water or other liquid are spilled over the unit. Also, the slate can be exposed to saline or dusty environments for about 48 hours and to extreme temperatures. There are other rugged tablets on the market, of course, so for those of you that think these 8 are not enough, we are mentioning some more:

Apple Sold More Tablets than Amazon and Samsung Combined in 2017: IDC
Read Next