Your email inbox is a repository of everything happening in your life. Off late, several app developers like Mailbox & Mail Pilot have been trying to reinvent email as a digital to-do list manager. Now, Google is providing its own take with Quick action buttons for Gmail. 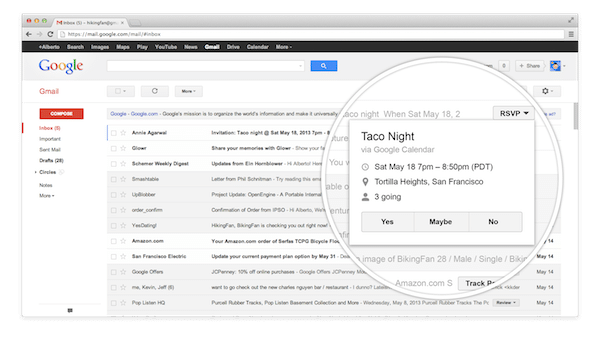 As shown in the example screenshot above, these quick action button appear next to certain types of messages in your Gmail inbox like responding to your friend’s party invitation or rating the restaurant you visited last night. These small tasks can now be done without having to moving away from your inbox.

Few weeks back, Google introduced an experimental Compose box which lets users to create new emails without losing sight of their inbox. That feature was mostly well received by users, and Google is now pushing the concept to other actions as well with this new update.

Other examples include automatically displaying the flight information as a pop-up based on the confirmation email one might have received. As you can see in the example below, it includes a Check-in button which is a quick action as well.

Google is hoping to add more actions in coming days and is also inviting the developers to add these actions to their emails. If you want to learn more about quick actions, head to http://developers.google.com/gmail/schemas right now. Essentially, there are two types of actions which can be implemented – in-app actions (like RSVP, review etc) and Go-to actions.

As always, Google is rolling out the new feature in a phased manner. You might have to wait for a while before getting to try them out.

TechPP is supported by our audience. We may earn affiliate commissions from buying links on this site.
Read Next
How to Fix Google Chrome Translate Not Working
#gmail #google