The Galaxy Note series is one that meant success for Samsung right from the beginning, when the first Note broke sales records and properly introduced the concept of enlarged smartphones in the market. Now, several years apart, Samsung has finally unveiled the third generation device and by the looks of it, we dare to say it will be another successful release.

As we speak, the Samsung Galaxy Note 3 is being welcomed in the scene by IFA’s Berlin audience and Samsung’s own CEO, JK SHIN. Besides an XL-sized display, a new technology stylus and impressive technical specifications, the Note 3 does come with some interesting tricks up its sleeve. Without further ado..

Unlike previous generations and pretty much every smart device that exists in Samsung’s line, the Galaxy Note 3 will be covered in a warm, texture-based cover which somewhat resembles leather, from what we managed to spot during the event. While design 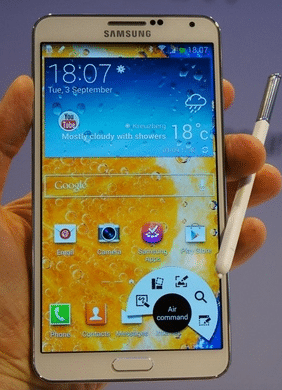 modifications to make the phone slimmer, lighter and more powerful were truly expected, I dare to say that the decision of abandoning cheap plastic (at least for some parts of the phone) in favor of a more friendly, even premium material, will be vastly appreciated.

In matters of functionality, the latest Galaxy note comes with an even larger display and a crisper resolution, which will cope nicely with the new and enhanced S Pen. Application wise, the Note 3 is said to be capable of powerful multitasking and faster downloads, thanks to category 4 LTE antennas with multiple bands.

Speaking of transfers, every bit of information processed by Samsung’s large beast will be protected by Samsung Knox, the company’s proprietary encryption service which has been integrated by default in this edition. From what we’ve heard, the Knox service paired with Note 3 will cope with business-to-business and business-to-customer services.

Software wise, the smartphone is powered by the latest Android 4.3 Jelly Bean version and we have high hopes of seeing it upgraded to Android 4.4 Kit Kat as soon as it’s available. The phone will also be integrated with the just announce Galaxy Gear smartwatch.

While a steady pricing feature has yet to be attached to the Galaxy Note 3, we’ve learned that the phablet is going to be launched in 149 different countries, on September 25th (alongside the Galaxy Gear and the latest tablet). A worldwide launch is expected in October. We also want to note that the phone will be available in three distinct colors: jet black, classic white and blush pink.

Moreover, depending on the country and Samsung’s own will, two variants of the phone will be shipped: one that can access LTE networks with a quad-core processor and one that cannot but packed with an octa-core processor.

Was this article helpful?
YesNo
TechPP is supported by our audience. We may earn affiliate commissions from buying links on this site.
Read Next
Samsung Galaxy Fold 4 Tips and Tricks: Get the Most Out of Your Phone
#IFA 2013 #samsung #Samsung Galaxy Note 3