Gionee who? That’s the question that popped up in our minds when we first heard of this mobile phone manufacturer with its roots in China. Admittedly, it’s easy for one to dismiss a relatively unknown brand as just another Chinese vendor, one of the countless others flooding the Indian market. However, that could be akin to judging a book by its cover, and as it turned out, Gionee is one of the biggest brands in China and operates massive manufacturing facilities with state-of-the-art equipment and stringent quality control. After a first-hand look at the company’s set-up in China, this editor came back suitably impressed. 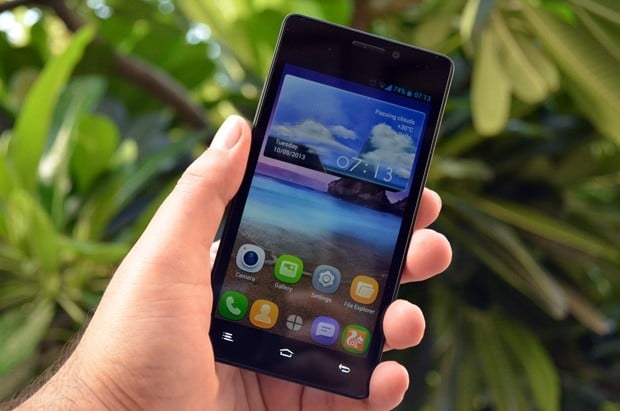 Clearly, Gionee is trying to break quite a few misconceptions that exist in the consumers’ minds about Chinese brands, and that isn’t going to be a stroll in the park. It also requires guts to launch a new mobile phone brand in this unforgiving and crowded market, and no one can hope to succeed without a long-term strategy in place. Therefore, it’s with mixed thoughts that we picked up the Gionee Elife E5 – not the outfit’s first offering in the Indian market, but it’s latest, and also the very first to pass through our review gauntlet. 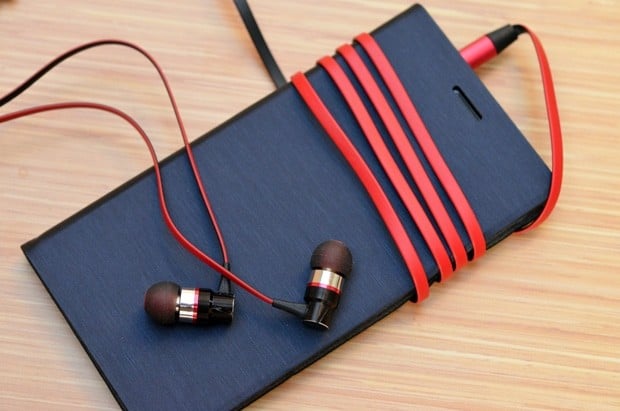 If you believe in the adage that “first impressions are lasting impressions”, the Elife E5 does strike a very good one. Encased in an anorexic 6.85mm thick body and toting a 4.8-inch screen, the E5 comes encased in plastic unibody with a matte finish, and is available in black, white or a Lumia-esque yellow. The E5 exudes a premium feel, is extremely well put together, and combined with its svelte profile and a screen size that sticks to the sweet spot, is very comfortable to hold and use with a single hand.

Apart from the screen, the fascia consists of the earpiece and front-facing camera on top and three backlit capacitive keys at the bottom. Bucking the norm, the front is devoid of any branding whatsoever. The bottom of the device is barren, and only the 3.5mm audio socket can be found on top. Both the volume rocker and power / sleep key are placed on the left – an unusual placement that requires a little getting used to, while the right is home to a microUSB port and a flap-covered microSIM slot. Do note that this is a single SIM phone, which again deviates from the norm since most other handsets in its category are dual-SIM devices. Flip the device to the other side and you’ll be greeted by the rear camera lens, encircled by a chrome ring and accompanied by an LED flash. It’s quick to shout about its 8-megapixel credentials. There’s a secondary microphone located above the camera. You’ll find Gionee branding in the middle, and a DTS logo along with tiny holes revealing the placement of the phone speaker near the bottom. The battery is non-removable and if you’re wondering where the memory expansion slot is… don’t, because there isn’t any.

As far as design, build and form factor is concerned, the Gionee E5 manages to impress on most counts thanks to its solid build, slim profile and a size that’s extremely manageable and a far cry from the large-screened devices that are popular these days.

The Gionee Elife E5 offers a 4.8-inch Super AMOLED screen with a resolution of 1,280 x 720 and a pixel density of 306 ppi, and it’s possibly the device’s biggest asset after its look and feel. It’s sharp, delivers crisp visuals and proves its prowess in everything from gaming to movie-watching. The icons look like they’re floating, while images and videos really pop out. The screen also brings out the E5’s skinned icons, themes and animations which look quite vibrant. The black levels and viewing angles are good, while sunlight visibility is pretty decent as well. Suffice it to say that it’s one of the best screens we’ve seen amongst most devices toting 720p displays. 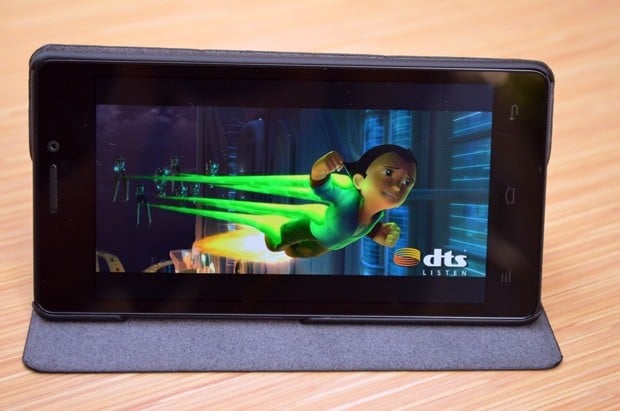 Any decent smartphone worth its salt these days doesn’t rock a main shooter less than 8-megapixels and the Gionee E5 sticks to the same megapixel count. In fact, it goes a step further and boasts a 5-megapixel fixed focus snapper at front, which not only serves well for video calls but also for selfies. The camera UI is quite straightforward and looks barebones at first glance. However, delve into the settings and you’ll find that it offers quite a few features and tweaks, including a set of frames you can choose from and apply before you click a picture. Then there are a slew of color effects, modes such as burst, panorama, beauty shot and best shot, various scene modes, range of capturing methods such as smile shot and gesture shot, and control over settings such as exposure, ISO and white balance. 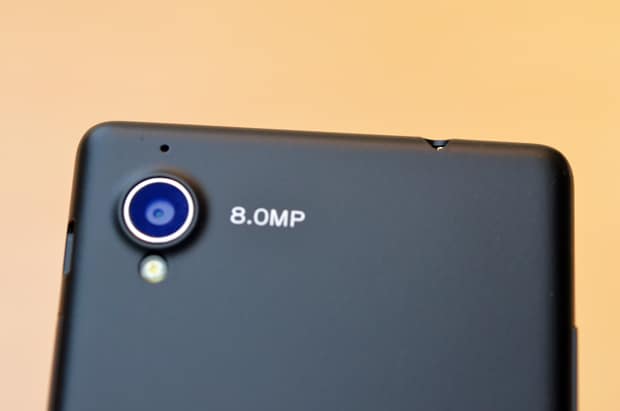 It’s also capable of shooting videos in full HD. Alas, while it seems loaded on paper, the real-world performance isn’t mind-boggling and remains decent without being impressive. The images shot in daylight turn out reasonably good, but as is the case with many smartphones we’ve reviewed, low light imaging isn’t its strong point. Ditto for the video quality. Let’s just put it this way – you won’t be buying the Elife E5 for its shooting prowess.

Quite a few Android enthusiasts can’t do without stock, while there are others who love their skins. And judging from the smartphones we’ve reviewed in the recent past, there are ample options available for both types of users. However, the Gionee Elife E5 takes an innovative middle approach. It runs Android 4.2.1 with its own custom skin that offers an animated lockscreen, skinned icons, and an app drawer with folder support. However, thanks to the support for themes and a baked-in Android theme, you can revert to a near-stock look and feel in a jiffy. How’s that for the best of both worlds? 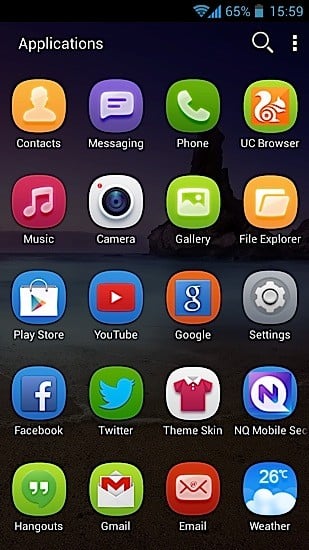 In addition, there are a host of home screen transition effects to choose from. You can set different wallpapers for the home screen and app drawer. The settings pane is divided into ‘Common Settings’ and ‘All Settings’, and offers a customizable power saver mode along with a scheduled power on / off time option. An interesting addition is the inclusion of a scheduled airplane mode option as well – allowing you to switch the handset to airplane mode at specified timings. There are quite a few preloaded apps as well, and include the likes of UC Browser, WhatsApp, NQ Mobile Security, Du Battery Saver, and Kingsoft Office, along with a few games such as Asphalt 6 and Wonder Zoo. There’s also an App Manager that features a built-in process killer, cache cleaner and boot optimizer to speed up proceedings.

Gionee’s Elife E5 is powered by the turbo variant of the quad-core MediaTek MT6589 SoC, which is tagged the MT6589T and is clocked at 1.5GHz. This capable chip is aided by a PowerVR SGX 544MP GPU and 1GB of RAM, and the E5 comes with 16GB of non-expandable storage. A little over 12GB is available to the user in total for apps and storage. While non-expandable storage isn’t really a deal killer by itself, considering so many other handsets do not come with a memory expansion slot, but the fact that it doesn’t support USB On-the-Go is the proverbial fly in the ointment. 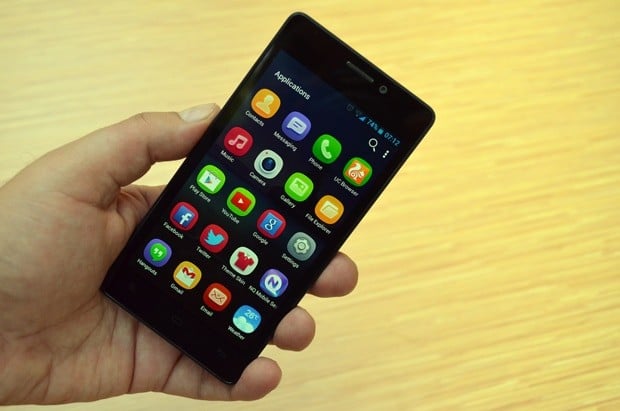 The other typical connectivity options such as Wi-Fi Direct and A-GPS are there, but tough luck if you’re interested in the likes of DLNA or NFC. The device sports more powerful specs compared to quite a few rivals which rock the slower 1.2GHz quad-core MT6589 processor, and as it turns out, the difference isn’t just on paper. The Elife E5 runs smoother and has no issues handling routine tasks. We did encounter a few slowdowns especially while exiting apps, but that’s where the built-in process cleaner app comes in handy.

Heavy games such as Dead Trigger and Riptide GP2 run quite smoothly, while the device excels as a media player thanks to its capable screen, DTS surround sound that works well with the bundled flat-cabled in-ear headset, and jerk-free playback of full HD videos. We didn’t face any issues with call quality, while the built-in speaker is reasonable in terms of output. However, the device really comes into its own as a music / media player with the headset plugged in and the DTS sound enhancement enabled. The battery life is above average too and the sealed 2,000 mAh pack keeps the device alive for a full day comfortably. 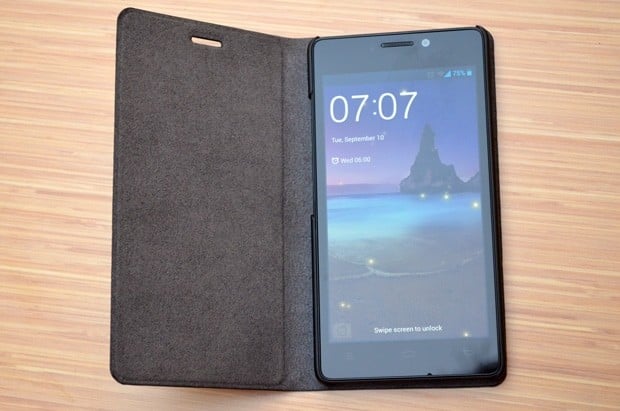 The Gionee Elife E5 carries a sticker price of Rs 19,999 (~ $315 at current exchange rates), and that puts it into the mid-range segment competing with the likes of the Panasonic P51 and the Micromax Canvas 4. If you consider other devices outside the Android ecosystem, Nokia’s Lumia 625 also falls in the same price category. While we think the E5 is priced slightly on the higher side (although it could be available for slightly lower online), there’s no denying the fact that it has managed to leave a very positive first impression for Gionee as a brand.

The non-expandable memory is our biggest gripe, but it scores highly on quite a few other parameters, the most critical of which are an excellent build, great screen, smooth performance and a decent battery life. It also impresses with the in-box contents, which, apart from the aforementioned premium headset, also include a couple of screen protectors and a stylish flip cover that looks premium and hardly adds any extra bulk to the slim device. The flip cover also doubles up as a kickstand, but we do have a small gripe with it in terms of design. With the cover on, the power key is slightly inconvenient to access due to the fact that it’s located on the left side of the device.

Make no mistake about it… Gionee is here to stay and we’re keeping our eyes peeled for its new flagship, the Elife E6, which is scheduled to land on Indian shores soon. Easy availability and a widespread (and capable) service network is also vital for any mobile phone brand, and we’ll be hoping that Gionee has already taken the necessary steps in this direction and made sure they’re ready to address customer concerns in the best way possible. In the meantime, if you’re looking to switch and covet a capable smartphone that looks good and doesn’t ask you to sell your soul to own, the Gionee Elife E5 should be amongst your list of options.

Disclosure: Gionee funded the author’s travel and stay to its manufacturing facilities in China.

Was this article helpful?
YesNo
TechPP is supported by our audience. We may earn affiliate commissions from buying links on this site.
#Elife E5 #Gionee