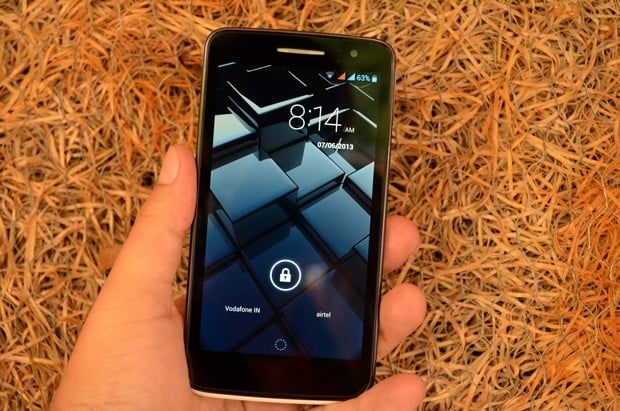 If you consider the various electronics brands available in the Asian market, Panasonic has pretty much one of the widest product portfolios available. Cameras, home entertainment products such as televisions and Blu-ray players, appliances such as air conditioners and refrigerators, kitchen appliances, personal grooming products including hair dryers and shavers, and even communications devices such as desk phones, fax machines and cordless phones — Panasonic covers it all. It even has a specialized range of laptops called the ToughBook series that includes ruggedized machines designed for extreme conditions, and similarly the ToughPad range of rugged tablets as well.

And while it used to be present in the cellphone space years ago, it chose to exit that segment much before the smartphone wave occurred. Now it’s back, and the device that’s been entrusted with Panasonic’s smartphone comeback is the P51 — a slim, and well-designed slab that ticks quite a few boxes in terms of specs and features. But does this dual-SIM device have what it takes to establish Panasonic as a brand to reckon with in the smartphone world or is it just another handset jostling for shelf space in the crowded Android market? Let’s find out.

To put it crudely, most touchscreen phones follow a very similar design ethos, and the Panasonic P51 is no different in that sense. It’s a flat slab with the screen dominating the front. To it’s credit however, it’s extremely slim and looks quite decent. Clad in a white plastic unibody, it doesn’t feel cheap and has a nice premium feel when held in the hand. The back cover isn’t removable, so the battery is sealed inside. Despite being slim, it’s not slippery, thanks to a design that involves two pieces fused together — a slightly raised portion for the screen and the rest of the body that slants before it joins the said portion. 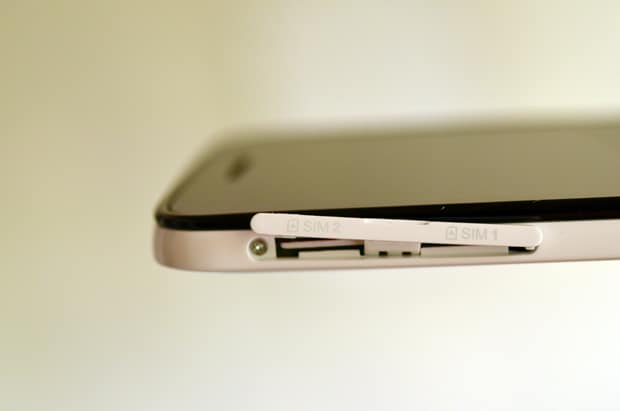 While the front is almost all screen (which is surrounded by a black border) save the earpiece, front camera and the array of sensors, the rear sports the protruding camera lens near the top with an LED flash below it, a Panasonic logo almost at the center, and the speaker grille closer to the bottom. The top is home to the 3.5mm audio socket at the power / sleep key, while there’s nothing except a microphone hole at the bottom. The left spine is where you’ll find the slots for the two micro-SIMs, covered by a tab, and also the microUSB port, while the right has the volume rocker and a tab-covered slot that accepts a microSD card. 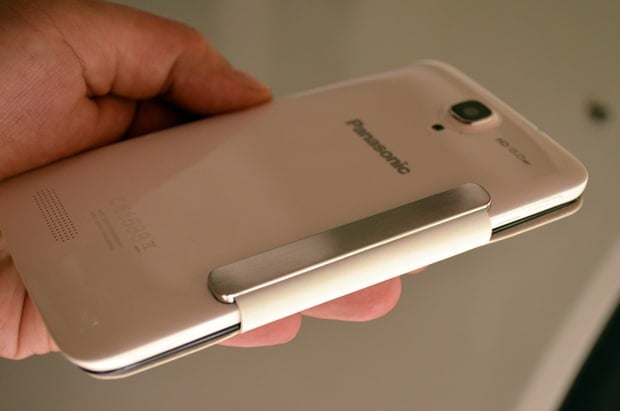 Even though it may not stand out when viewed from a distance, the handset looks fairly elegant and we think the build quality is quite solid. The one niggle we have is the placement of the power / sleep key on top — since this is a large screen device, it may be bit of a stretch for those with smaller hands to reach, and maybe, the right space would’ve been a better place for it. The sales pack also includes a small capacitive stylus, and a flip cover that attaches magnetically to the side of the phone, much like Apple’s Smart Cover for the iPad. However, unlike the latter, the one included with the P51 isn’t smart, i.e., it doesn’t awaken the device automatically when flipped open. However, it should be able to protect the screen from scratches, and also provides an opening for the phone’s earpiece so you can converse with the flip cover closed. 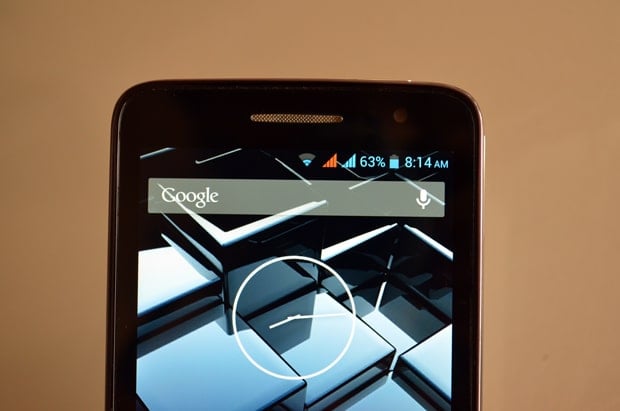 Sporting a 1280×720 (HD) screen fashioned from Asahi Dragontrail glass, the P51 offers a 5-inch window for your smartphone usage. The IPS LCD screen sports a pixel density of 294 ppi, and is quite crisp — definitely one of the better displays we’ve seen. It offers very good touch response, nice contrast, and great viewing angles… and sunlight legibility is good as well. There’s a very slight bluish tinge and the display seems to be tuned on the cooler side in terms of color reproduction, but that’s really not a deal breaker and the P51’s screen is undoubtedly an asset when you’re consuming content, viewing media and getting your regular fix of social networking and email. 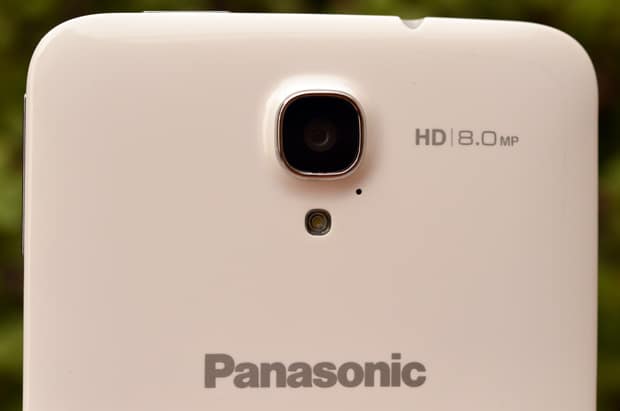 As is the norm for most mid-to-high-end phones these days, the P51 totes an 8-megapixel main camera, while a 1.3-megapixel snapper handles video calling duties at the front. The main shooter offers a slew of the usual frills we’re used to, including an HDR mode, beauty shot, panorama, and burst mode. It allows you to snap stills and video from the same place without having to switch modes, offers a slew of scene presets and color modes, and allows control over aspects like exposure, white balance and ISO as well. 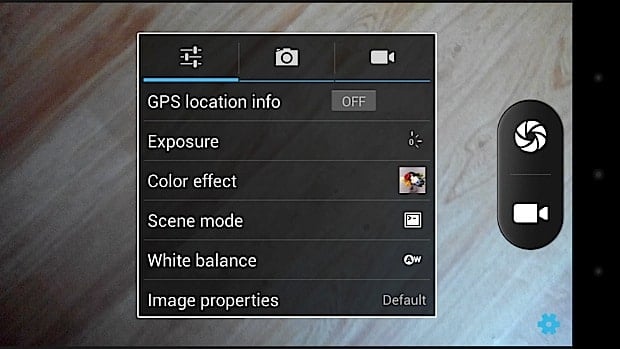 It’s capable of shooting full HD videos and also features software-based stabilization to eliminate jerks. In terms of quality, it follows a very similar pattern to most smartphone cameras — that of being able to snap reasonably good photos in good lighting, but not being too friendly with low light conditions. Pictures captured in low light are riddled with noise. The video performance mimics its still quality for the large part, but we did come back with some usable low light videos… notwithstanding the fact that it captures them in the age-old 3GP format.

If you’re a stock Android fan, you will be pleasantly surprised with the Panasonic P51. Not only does it run the near latest version of Android (version 4.2.1 to be precise), its implementation is very close to stock and devoid of any skins, right down to the use of software overlays for the usual Android keys — back, home and task manager. There are no physical keys on the front. However, there are a few tweaks that include custom iconography (which is immediately apparent), and other software tweaks that sit below the surface. 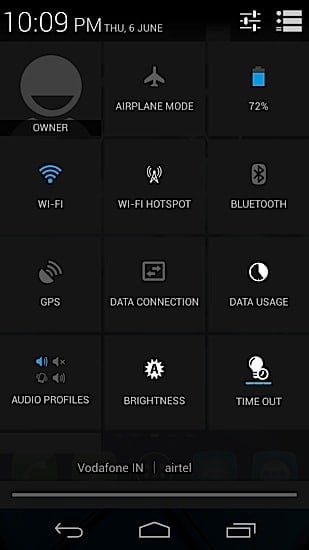 For one, the notification bar provides a one-tap access to a quick menu that offers an array of connectivity toggles and other settings. Then there’s the SIM management utility that controls the two SIMs and allows you to choose the default one to use for voice calls, messaging and data. Delving into the main settings menu, you’ll also find gestures that include ‘flip to mute’ for incoming calls and a ‘shake to switch’ feature for music as well. Next, there’s an option for specifying scheduled power on / off times and a quick start setting that shortens boot time.

An image editor and a video editor come pre-installed, along with a nicely-designed music player. Pre-loaded apps cover CamCard, CamScanner, Play Music, Evernote, Kingsoft Office, Chrome and WeChat — useful stuff but nothing you can’t acquire from the Play Store yourself. Sticking to the stock theme, text input is handled by the stock Android keyboard which is quite capable and offers features like word correction. Of course, it can easily be replaced by downloading and installing a third-party option like SwiftKey if you prefer.

Inside the Panasonic P51 sits a 1.2GHz Mediatek MT6589 quad-core chip, the silicon of choice for many a budget and mid-range device these days, also to be found in the Micromax Canvas HD. This Cortex A7 chip is mated with a PowerVRSGX544 GPU that handles graphics, along with 1 gig of RAM. The internal memory is 4GB, out of which a mere 1.6GB or so is available for the user. These specs, we feel, are quite stingy for a device like the P51. While performance remains smooth for the most part and running day to day tasks on the device isn’t really a problem, there’s discernible lag while playing some heavy games. The saving grace with respect to the storage issue is the presence of the microSD slot, so you can add more, and there’s USB On-The-Go support that allows you to connect external flash drives and access their content directly. 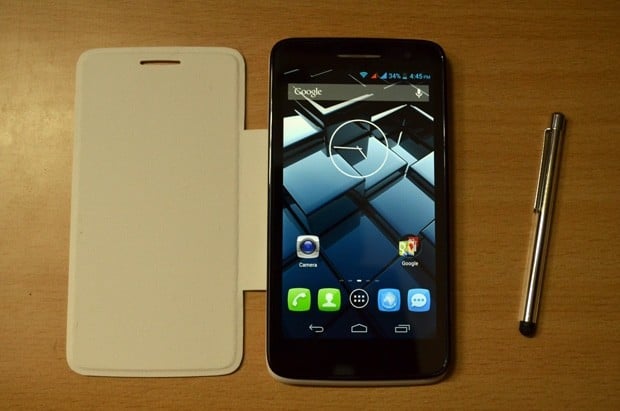 Other connectivity options include the usual GPS, Bluetooth, and DLNA — nothing that’s worth shouting about. The handset plays full HD videos quite smoothly — claiming stake as a useful media player thanks to its lovely screen, notwithstanding its refusal to play some of the video formats we threw at it.

The sealed 2,500mAh battery is definitely one of the strong points, making the phone last for over a full day comfortably even with heavy usage, without having to pay the usual homage to the power socket — another critical point that works in favor of the P51 and quite commendable since it’s a dual-SIM device with a large and high resolution screen we’re talking about here. 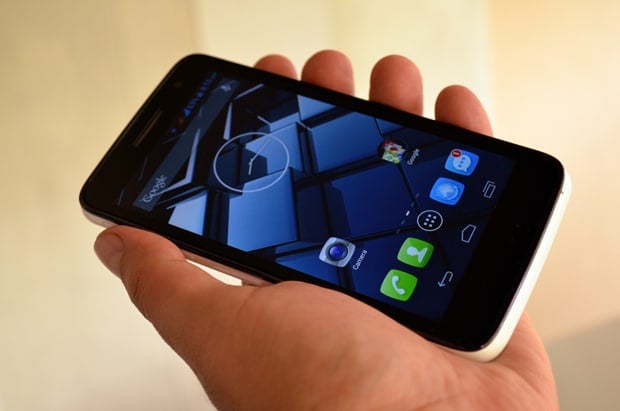 There’s really no perfect smartphone out there if you ask us. In any case, us reviewers have a knack of coming up with and pointing out foibles with anything and everything — our reviews of even the flagships such as the HTC One and the Samsung Galaxy S4 speak volumes. That said, many users are willing to compromise on a few things as long as they’re getting what they desire in terms of preferred capabilities, features, perceived value for money and aesthetic appeal. For example, not everyone may require a stellar camera, while some may be willing to sacrifice performance in favor of better battery life depending upon their own requirements and usage patterns.

The Panasonic P51 in that sense, checks most of the right boxes and comes up triumphant in many key areas — boasting of a very good screen, a solid build, decent looks, a near-stock Android implementation, reasonable performance and extremely good battery life. The aspects where it leaves something to be desired mainly involve the phone’s performance with respect to heavy games, and a camera that’s reasonably good but doesn’t really shine.

As mentioned earlier, these are things that, to some extent, can possibly be overlooked depending upon individual tastes. However, the one thing that can’t be overlooked at all is the price, and unfortunately, that’s where the comparisons will be done. While its MRP of Rs 26,990 (~ $470) seems quite high considering its specs, the street price of Rs 22,390 (~ $390) is certainly more digestible. However, even at that price, it cannot escape intense heat from devices like the LG Nexus 4 and the Samsung Galaxy S III. Both are priced higher, but the difference isn’t that much for the user to ignore what they offer in comparison with their significantly better specs and better performance. Not to mention better features, more storage, and the pull of brands that aren’t alien to the smartphone world, unlike Panasonic. While we think the Panasonic P51 is a very capable device, we feel that it lacks a hero feature, and won’t be able to create a ripple in the crowded Indian market unless it drops to a much lower price.

Was this article helpful?
YesNo
TechPP is supported by our audience. We may earn affiliate commissions from buying links on this site.
Read Next
Skullcandy Mod Review: Betting on doing the basics well
#P51 #Panasonic #review