For years, Google has placed its bets on the low-budget price of Chromebook as the selling price of the notebook devices. However, that won’t be the case anymore, as Microsoft today unveiled Windows running laptops for as low as $199.

At its world partner conference event, company’s COO Kevin Turner revealed HP’s new lineup – “Stream” – that costs just $199. And wait, that’s not all. There are $249 laptop from other OEMs like Acer and Toshiba as well. The Stream lineup also have 7- and 8-inch Windows running PCs that cost just $99. 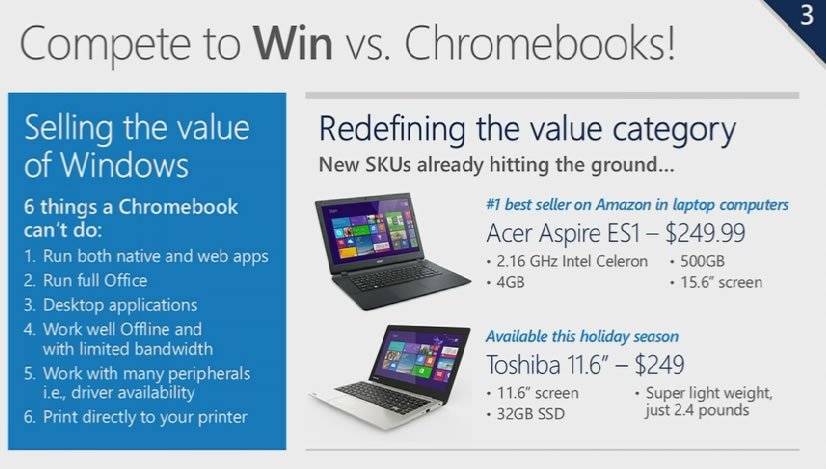 While Acer’s laptop sports a 15.6-inch screen, people looking for small-sized laptops can go with Toshiba’s 11.6-inch display laptops. Acer’s laptop is powered by 2.16 GHz Intel Celeron processor. No technical specs of Stream lineup were revealed at the event.

Tuner cleared Microsoft’s stance on low-budget laptops. “We are going to participate at the low-end,” he said. “We’ve got a great value proposition against Chromebooks, we are not ceding the market to anyone.”

We did see this coming. A few months back, Microsoft made Windows OS for 9-inch or smaller devices free. It seems Intel’s Celeron processors are now finally allowing the OEMs to reduce the price. These devices are shipping this coming holiday season.

It is noteworthy to mention that earlier this year, the company had also announced Windows with Bing, so these devices might actually be running that version of Windows — which isn’t much different from the regular Windows 8 people boot to. The company also unveiled several new Windows-powered laptops and tablets that will be shipping soon. More on this as the story develops.

Was this article helpful?
YesNo
TechPP is supported by our audience. We may earn affiliate commissions from buying links on this site.
Read Next
How to Install and Use Intel Unison App on Windows, Android and iOS
#Chromebook #microsoft