“Who’s the fellow standing in the corner?”

That was the query of the most of the non-tech media in India (and they do end up at tech events – how and why is another story for another blog, perhaps) were asking at the launch of the Jolla phone at an event in Delhi a few days ago. Some wondered if Jolla was doing something for the “handicapped” (a term regrettably still in use in this country) and whether the tall, slim, bearded person with a shrunk right arm, in a T-shirt and jeans was a representative of that initiative.

The geek crowd, however, could not take its eyes off him once it got wind of who he was – his official pictures show him minus the beard. For the man with seemingly one good arm – he actually could do a fair bit with the other, so I am really not sure whether calling him one-armed is fair – was among those who jumped off Nokia’s Burning Platform and dared to travel in a small boat instead of boarding the Windows Phone galley. 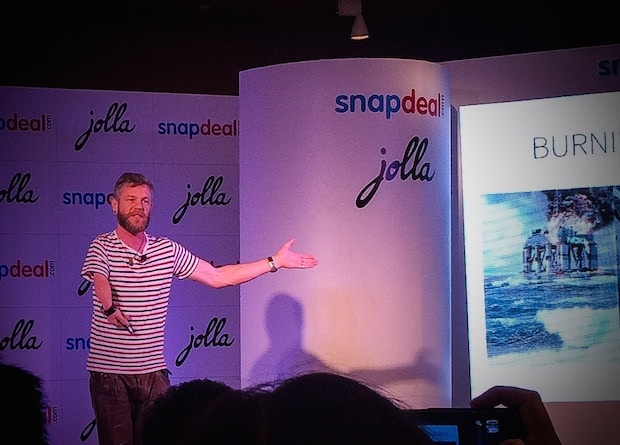 The tech world knows him as Marc Dillon. LinkedIn describes him as “Co-founder, Head of Software at Jolla” while Twitter tells you a bit more: “Guitars, MeeGo, Finland, ReefKeeping, HiFi, Cameras, OpenSource, Motorcycles, Love 3“. Of those, MeeGo is perhaps the most significant. Marc was one of the team working on MeeGo at Nokia when Stephen Elop dropped the news about the company putting all its smartphone eggs in the Windows Phone basket and discontinuing MeeGo (“I was sick to my stomach,” he would confess in an interview to Forbes).

Dillon was one of those who left Nokia after the highly acclaimed N9 device, the last Nokia device to run on MeeGo. And was also one of the founders of the company called Jolla, which literally means “dinghy” or “small boat” in Finnish, which was formed in 2011. “Nokia had the burning platform. So we took off on a small boat. A small boat called Jolla,” Dillon would say with a wry grin at the conference. The company resolved to keep the MeeGo movement alive and came out with its own OS called Sailfish and its first phone, also called Jolla in November 2013.

It was either a very brave or a very daft move in a world that was dominated by Android, with the iPhone occupying a comfortable niche, and Windows Phone doing its best to knock both off their perches. Jolla, by all accounts, is not a corporate behemoth and does not have a huge staff.

What it does have is people like Dillon. A man who dresses casually, speaks with passion, and has no illusions about what he is facing and what Jolla stands for.

For half an hour at Delhi, Dillon held forth on three issues that most smartphone players seemed to have forgotten – one-handed use, experience and privacy.

“We set out to deliver the best multi tasking in the world. All your apps are open and can be used one handed easily,” he said, even while demonstrating how effortlessly he could use the Jolla device using a series of taps, swipes and gestures. “It is the experience that should count. Choosing a smartphone should be more than about choosing cameras and processors.”

On the matter of privacy, an issue he clearly feels very passionate about, he thundered: “This is not about profit. This is about respecting you. We will never sell or share your data with anyone.” He stressed on the openness of the Sailfish OS, the fact that anyone could use it and that it had a strong community around it.

It was a magnificent performance, but it was also difficult to ignore the fact that this was a very small player taking on some very big competitors. Competitors who are launching devices with bigger retail and marketing muscle, and with much more brand awareness.

The enormity of the challenge does not seem to faze Dillon. “There are only three companies doing well in mobile,” he paused, letting us all make our own guesses, and then instead of naming the three, stated bluntly: “And the consumer is not getting the best.”

Dillon stepped in before he could finish.

“What about the apps that Android has?” another person asked.

“Android apps will run better on a Sailfish OS than on Android itself,” he said.

It is a bold claim. As are most of those made about Jolla by him. But then this is a man who seems accustomed to throwing gauntlets in the faces of giants. There will be those who will say that the Jolla team is a blast from the past and is clinging on to factors that no longer matter in phones. That screens are getting bigger, that quad core processors and cameras with massive megapixel counts matter. But the fact is that it is difficult to disagree with the points Dillon raises – yes, one-handed use does make things easier (ask anyone standing in a bus or a Metro). Yes, experience makes a massive difference. And yes, we should be worried about privacy and our data. 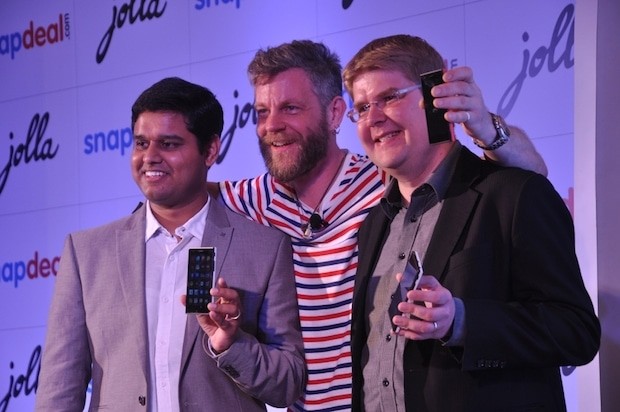 Will Jolla sell millions of phones and rise meteorically to the top of the smartphone mountain? Current evidence seems to suggest otherwise – the Jolla phone has received much acclaim, but has been seen more as a “geek’s phone” rather than a mainstream one. And yet, its importance cannot be denied. For it, by its very existence, proves that alternatives can exist – the some will attempt to bake a cake even while others insist on serving ice cream, albeit in different flavours.

No, we don’t know how well Jolla will do in India. What we do know is that it will give the consumer another option. A very different option in terms of hardware and software. At a price that is significantly lower than most flagship phones in the market. Yes, some of its values seem to stem from the past, but let it not be forgotten that it was a past that was golden. And as George Santayana so memorably said, “those who forget the past are condemned to repeat it.”

It is a small boat indeed. But in Marc Dillon, it has something akin to a Nelson, rather than a crazed Ahab chasing an Android Moby Dick, at the wheel. And we all know what that single-minded, single-armed gent did at Trafalgar.

The man may not have the financial resources of some of his competitors. But he has passion and courage. And belief. And he sure knows how to win hearts.

“Thank you for having us. It is an honour to be in India,” he said in Delhi, bowing to the crowd before he began to speak, charming several of them by one simple sentence.

Much though I wanted to, I could not get to talk to him at the end of the event – he was surrounded by people and was answering queries with a mix of patience and passion that is a rare cocktail in the higher echelons of the smartphone world. This is a man who likes to talk to people – a quality he shares with that other charismatic leader, Xiaomi’s Hugo Barra. That’s good. And bad. Good because people do get to talk to him. Bad, because those who are waiting to talk to him often end up waiting for a long time.

A deadline beckoned, so I had to take my leave early. But if I HAD managed to sneak in a word, I guess I would have said, “About coming to India? The honour was ours, Marc. May your journey here be an eventful one. Bon voyage.”

Was this article helpful?
YesNo
TechPP is supported by our audience. We may earn affiliate commissions from buying links on this site.
Read Next
How NoBroker is Building the Ideal Broker with an AI Brain
#Jolla #Marc Dillon #Profile