When we go on a holiday, choosing the best hotel or hostel is also dependent on the WiFi connection they offer. Apart from the quality of customer service, the condition of the rooms, the number of services included in the price, the quality of the food and a couple of other important aspects, internet ranks as being a determining factor.

Although this is the situation we’re dealing with, the bad thing is that there aren’t so many clear ways of finding out information about WiFi in hotels. While most hotel-listing websites will also give you some data about internet – whether or not it is available and if it’s free or not, there aren’t so many services ranking the quality of WiFi. 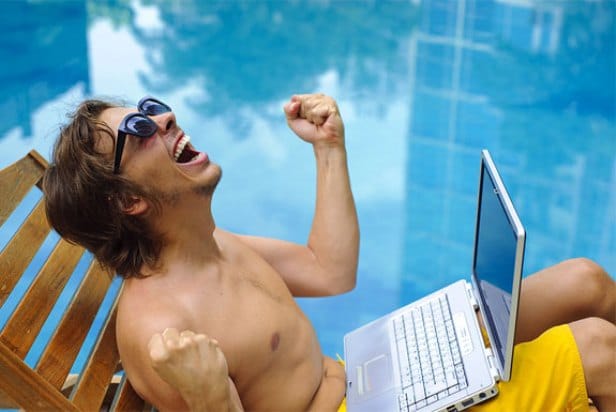 Taking a look at the available options, we identified one such service that everyone seems to be talking about – Hotel WiFi Test. Apart from this one, there are two others that try to do the same, but they’re far from being as popular, and there are various websites that provide information about hotels in general, including a few useful reports. Let’s take a look at what we discovered!

This is the best option currently available on the internet – it is a place that particularly focuses on providing clients with information on Wi-Fi connections in hotels. For this reason, although they do give some brief descriptions of the other amenities (dining, swimming pools, rooms, etc.), there aren’t any personalized reviews included.

The only way for one to test the speed and general quality of WiFi in a certain place is by having someone physically go there and check it. That’s what Hotel WiFi Test did as well – this is also how they managed to have one of the most complete databases available.

All you need to do is go to their website and type in the name of the hotel you’re looking for. You will then find out whether it is free or paid, what the expected speed is and how trustful the WiFi there actually is. You can also look hotels up by city, and you will find reports based on speed on their homepage – apparently New York, London and San Francisco seem to have the best hotels from this point of view.

Coming a bit later than the previous service provider, Speed Spot has only been created at the beginning of 2013. It’s not doing very bad, as it’s been constantly growing since then, but its database still lacks quite a few names and cities.

Hotels can be found based on the city or by name, and the best ones will always be listed on the main page. One thing that’s particularly cool about Speed Spot is that it’s also partnered with TripAdvisor, Booking.com and Hotels.com, which makes it easier to get further information on a hotel that caught your attention.

They also have a blog that’s always updated with interesting information and reports about most well-known hotels in the world. Another cool and fairly new thing they did is to create an app that can be used on your smartphone – there’s one for iOS, that requires iOS version 7.1 and comes in various languages, and there is also one for Android, requiring v2.3.3. Both of them are free, as well as the services offered on their website.

A bit more basic than the previous ones, Hotel Internet Speed is another service that you could use. Instead of letting you search for a hotel/hostel by name or city, it provides users with the map of the world. This one includes pins with the hotels that have already been tested, and the database is definitely not very big.

However, it’s worth giving it a chance in case you didn’t find the hotel you were looking for anywhere else. Also, the fact that you can zoom in and directly select the hotels from the country or city you’re interested in makes it a lot easier to find what you need.

On their blog, you can also find various reports – the first hotels they tested in a brand new country, their top 10 hotels from a specific area and many others. In case you stayed at a hotel and had a chance to test their WiFi, you can help these guys out a little by leaving a comment. 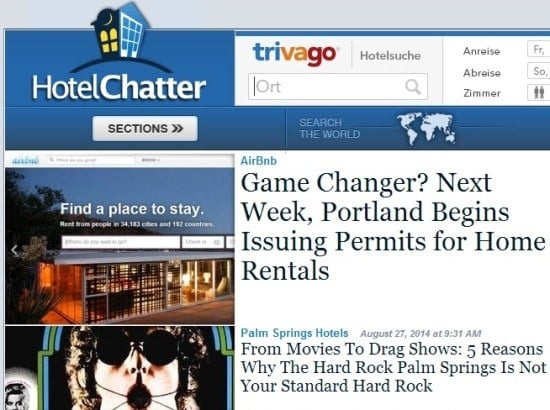 One thing that is definitely helpful when you’re looking for information on hotels is to look at websites or blogs that are solely dedicated to this subject. Hotel Chatter is one of them, and although they don’t only focus on the speed of the WiFi connection, they do publish a few useful reports about it.

On the top right-hand side of their web page, you can enter the name of a hotel to see if they have any particular information about it. You can also look for hotels in a particular city or read the reports per year – there’s one for 2014 that talks about hotels that still charge for their internet and why.

It’s definitely not a speed tester or anything, but it’s a good place to look for information. It also has reports that are named “Best Hotels 2010” or “Worst Hotels 2012”, which can always be an interesting thing to check before you book your next hotel.

Rotten WiFi is basically a blog that is all about WiFi – at the name clearly indicates it, they try to be something like Rotten Tomatoes, just not for movies. They’re not only focused on internet in hotels and hostels, but just internet in general.

However, they did create an Android application that is being used by people to provide information about hotels’ WiFi connection. Although it’s generally their staff that does the job, you can also be part of this story by sending them your opinion on a certain hotel you stayed at.

Their database is still evolving, but they do test a few new hotels per country every month. Here is a useful report that tells you what the average download and upload speed is, as well as the general client satisfaction for a few hotels. 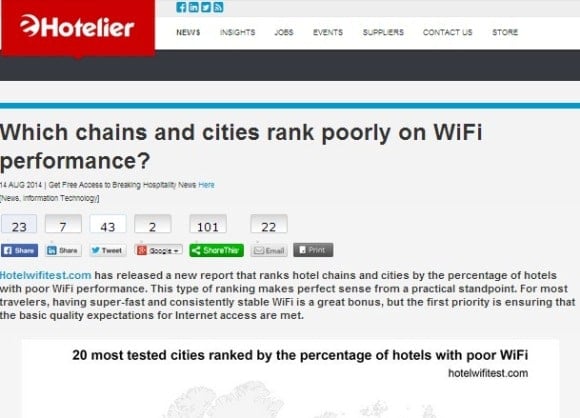 Similar to Hotel Chatter, EHotelier is a great place to find out which hotels rank poorly in terms of WiFi. According to them, Stockholm, Amsterdam, Hong Kong and Tokyo are doing pretty bad while Las Vegas and Paris have some of the best hotels from this point of view.

This is mainly a website packed with hotel news and information about jobs or events in the hospitality sector. Although it may not seem like the best place for you to look up a hotel, it tends to have pretty good info, and you can be 100% sure that whenever a brand new up for ranking WiFi in hotels will come up, they will be the first ones to write about it.

Apart from these six tools that are clearly useful in so many different ways, I also recommend checking out websites like Hotels.com or Tripadvisor. Also, if you’re looking for hostels, you can check Hostel Bookers or other similar sites – they are focused on offering general reviews, but they almost always include some info about the internet in those places. Or, you could boost your Wi-Fi signal.

So one thing is very clear. All of these services are at their nascent stage at the time of writing and have huge potential to grow and get better with what they are trying to do.

Was this article helpful?
YesNo
Photo Credits: AquaTeraLiving
TechPP is supported by our audience. We may earn affiliate commissions from buying links on this site.
Read Next
How to Use an Android Phone as a Wi-Fi Hotspot
#Hotel WiFi #Hotels #wi-fi