Microsoft will be releasing some version of Windows 10 this summer. While the company hasn’t yet officially announced a specific release date yet, it has apparently begun to notify some users about the impending release of Windows 10. 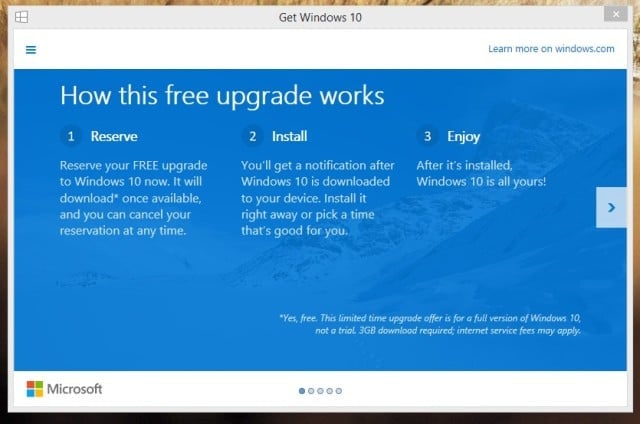 As a user on Reddit points out, Microsoft has begun to what appears to be pushing the first advertisement of Windows 10 to Windows 7 and Windows 8 users. On the pop-up, the company is reminding users about the impending update, and also giving them an easy option to ‘reserve’ an upgrade to the forthcoming operating system when it becomes available.

First of all, the ad is showing up on computers that have the optional KB3035583 update installed on them. If you are not seeing the free upgrade option on your computer, you will want to check the system settings to look for this update file. If you can’t locate it, you can manually grab it from this link.

Once installed, the company pushes a pop-up to computers showing users an option to opt in for a ‘free upgrade’ to Windows 10. By accepting the company’s terms, users are allowing Microsoft to initiate an automatic download of an eligible Windows 10 version on their computer as soon as it becomes available.

If you find the pop-up annoying, you can uninstall the update dubbed ‘KB3035583’ to get rid off it. Also, do note that the pop-up goes away after you have opted in for the update.

For a refresh, Windows 10 will come as a free upgrade to anyone with a legit copy of Windows 7, Windows 8 (as well as Windows 8.1 and Windows 8.1 Update). For others, as a listing on online retail store Newegg recently revealed, Windows 10 Home will cost users $109.99, and Windows 10 Professional will set them back by $149.99. The listing also reveals that Windows 10 will go on sale starting August 31, which is in line with recent rumors that suggest Windows 10 RTM becoming available on July 31.

Was this article helpful?
YesNo
TechPP is supported by our audience. We may earn affiliate commissions from buying links on this site.
Read Next
How to Upgrade from Windows 7 or 8 to Windows 10 for Free in 2020
#Windows 10. Windows 10 Free Upgrade #Windows 7 #windows 8