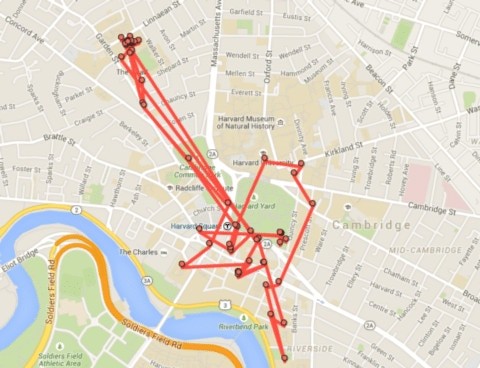 Facebook’s Messenger mobile app is one of the most popular instant messaging apps out there. Connecting over 600 million users every month, the app allows users to text to their friends and other people on the social network, as well as make free voice calls. But what many don’t know is that the app was also constantly sharing information about their whereabouts. Previously the messaging client, by default, would share location information of users, and this data was available to all of their friends and members of the groups they are part of.

Harvard student Aran Khanna recently shared his findings on a blog post titled “Stalking your friends with Facebook Messenger.” In the post, Khanna revealed that users can easily track down the recent as well as past locations of their Facebook acquaintances with up to a meter of accuracy. Khanna also made a Chrome extension to help users visualize their and their friends’ location data.

In the post, Khanna noted that he was able to track down his friends’ exact whereabouts as well as other habits after analyzing a couple of messages he had sent to them over the past few days.

But in less than two weeks since the blog post went up on Medium, Facebook is prepared to take a recourse. The company today announced that it switching off the location-tracking option by default in Messenger mobile apps. “With this update, you have full control over when and how you share your location information. You only send a location when you tap on the location pin and then choose to send it as a separate message. You can also share a location—like a meeting spot—even if you’re not there.”

The company says that users can still share their location with others if they choose to do so by enabling the feature from the settings. Facebook assures that “Messenger does not get location information from your device in the background — only each time you select a location and tap Send when you use the Messenger app.”

Was this article helpful?
YesNo
TechPP is supported by our audience. We may earn affiliate commissions from buying links on this site.
Read Next
How to See Liked Posts On Facebook [2022]
#facebook #location-tracking #Messenger