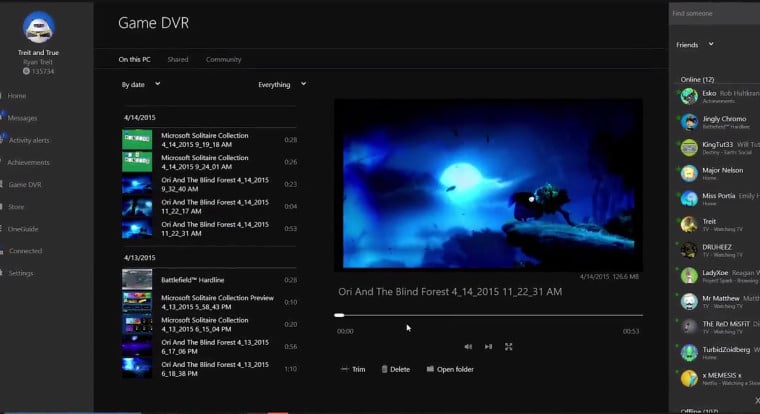 Microsoft has already included the Xbox App in Windows 10 which will allow users to connect to the Xbox Live network and stream games. Game DVR feature allows to capture snippets of gameplay or record them, and now Microsoft is adding a similar feature outside the Xbox app, as well.

How to enable screen recording in Windows 10

According to early testers, the new feature works with any app but only inside them, as it doesn’t allow to record the desktop. Maybe the final version of Windows 10 will bring this functionality, as well, but for now this is how things are. Also, you need to have an app open for the screen capture to work. Here’s how to start recording your screen:

The Settings button lets you place a limit on the length of videos that can be recorded. Videos are saved in MP4 format in the Videos\Captures folder. For more options, you need to go to the Game DVR section of the Xbox app and there you can access the videos you’ve recorded. Also, you’re restricted to 1080p when recording, but that’s really not that bad. There’s a minimum hardware specifications that you must meet, as well – Intel HD graphics 4000, GeForce 600/800M or AMD Radeon HD 7000 series.

You can also make use of a basic trim tool, but that’s about it when it comes to editing. However, I’m sure that most of us don’t need professional screen capture software and will appreciate the introduction of this small, but very useful and much-needed feature. Now I’ll be able to record my chess sessions and share my games with my friends.

Was this article helpful?
YesNo
Source: TechAu.com
Photo Credits: NeoWin
TechPP is supported by our audience. We may earn affiliate commissions from buying links on this site.
Read Next
Alt Tab Not Working in Windows 11/10 [Fixed]
#Windows 10