One of the most innovative features in Windows 10 is Continuum which allows users to connect a keyboard and mouse to a touchscreen device. And now Acer has come up with a new smartphone that is the first of its kind which makes use of this new feature, basically turning into a PC when connecting the companion keyboard. 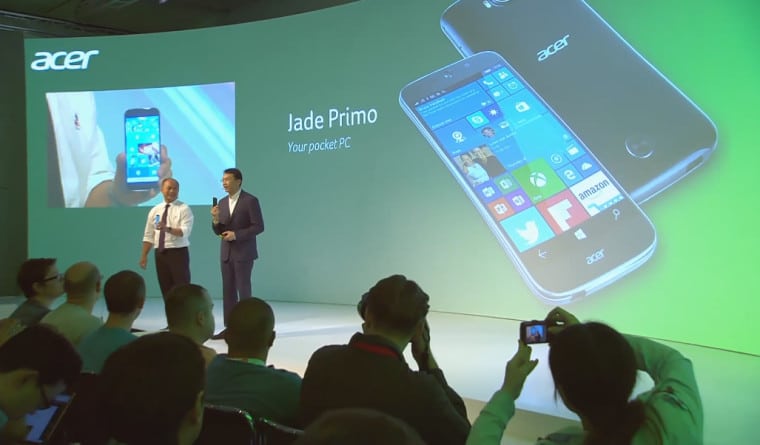 Called Jade Primo, the handset is described by Acer as a “PC Phone” will be called the Jade Primo, and will serve as a laptop replacement in those moments when you don’t have one around. Continuum is mostly being used in Windows 10 2-in-1 devices, but there might be users interested in having this feature on their smartphones, a swell. Regarding the specs of the device, here’s what it sports:

In order to transform the smartphone into a computer, you will receive a docking station and accessories like a keyboard and wireless mouse in the box. This does indeed look like an interesting device and the fact that it’s coming from Acer should hint at an affordable price, but at the moment it hasn’t been reveal, and we also don’t know when it will be made available.

Touted as the first phone in the world that supports Continuum, the handset will also be able to run universal Windows 10 apps, as well as x86-based apps. The device comes with some nice specs and that’s exactly what Microsoft needs in order to try and increase the adoption of the upcoming Windows 10 mobile.

At the same event Acer has announced the Predator 6 smartphone with a 10-core processor, 4GB RAM, 4 loudspeakers and other premium features.

Was this article helpful?
YesNo
TechPP is supported by our audience. We may earn affiliate commissions from buying links on this site.
Read Next
Alt Tab Not Working in Windows 11/10 [Fixed]
#acer #IFA 2015 #Windows 10