Between EverythingMe closing shop, QuickPic being sold, ES going to the crapper and Pushbullet suddenly asking $5 a month for the same things you had for free last week, I thought it was a good time to have a conversation about paying for apps.

I know that’s not Android’s thing but I’m sure you’re starting to realize that if you want your favorite apps stay around and keep getting better – they need money to survive. And they better get it from you – instead of selling to a shady conglomerate.

And I think this is a great time to start buying paid apps. Much like Apple, Google has enabled lower prices for developing countries. That means that the same app that retails for $2.49 in USA can be bought in India for Rs 20. That puts some paid apps in impulse buy category. Hell, that’s a decent cup of chai category. I’m using India as an example because that’s where I live. Let me know in the comments below about the app pricing in your country.

Plus there are more ways to pay for apps now. Other than credit cards, you can buy Play Store Gift Cards using cash or take Google Opinion Rewards surveys to make money if you’re in the US.

If you’re ready for a superior, feature rich and an ad-free app experience, start with checking out the apps below. Each and everyone is worth it.

Note: It’s called a non-exhaustive list because I want to continue the paid app conversation in the comments below. Also, let me know if I missed any cool niche paid apps.

Pocket Casts is the best podcast client for Android. There’s no disputing that. It blows away the competition – Player FM, BeyondPod, Stitcher and others. The app is thoughtfully designed, looks great and has all the Material Design goodness you’d expect. 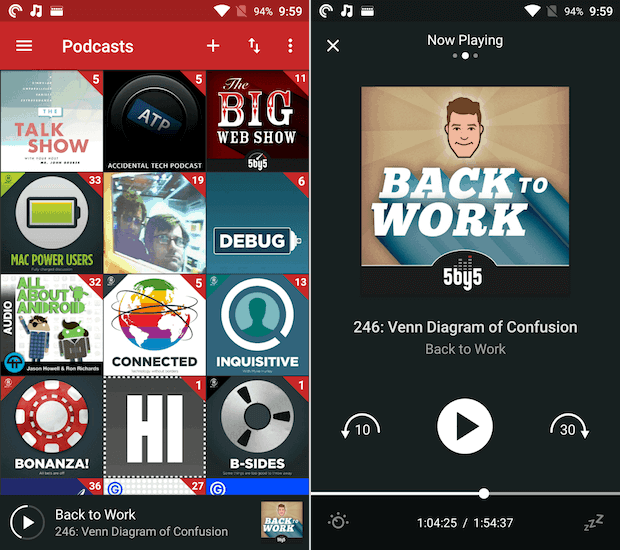 If you’re a podcast fan or you’re just starting to discover the wonderful, wonderful world of podcasts, just get the app. It’s totally worth the $3.99 (Rs. 199). If you want to know more about what it can do, check out my article here.

I like to think that there are only two optimal Twitter experiences on Android. Either you go with the official client and deal with the ads and the lack of powerful features, or you accept the third party route and just buy Fenix for $5.49 (Rs. 370.26).

Of course, the third party road isn’t for everyone. You won’t get all the great and latest Twitter features – Cards and Polls to name a few. But if you’re willing to make that sacrifice, Fenix will give you a fast and pleasant Twitter experience. You can customize the theme, how the tweets are displayed, how the links open and a lot more. 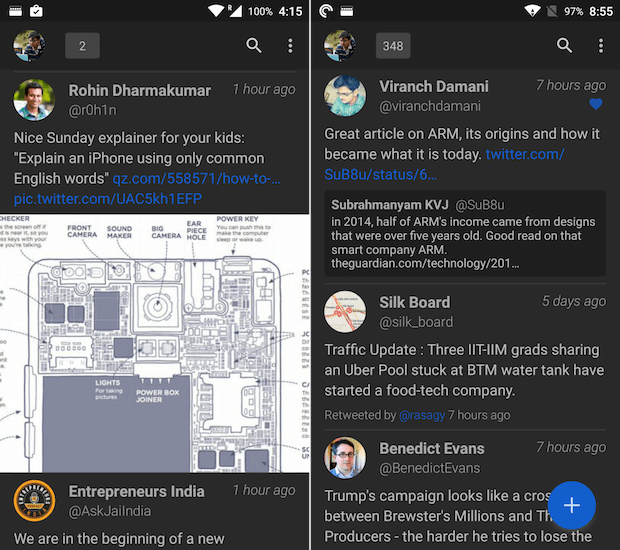 For me, Fenix is worth it just for one feature. The ability to long press a link and quickly share it with any app. And as Android’s share sheet shows a shortcut for the most recent app you shared to, I can send a link to Instapaper in literally 2 taps.

Yes, there are many third party Twitter clients around but Fenix is the option the community has backed (much like Tweetbot is the third party client on iOS). Falcon Pro used to be big deal but not anymore. Alternatively, Talon is also worth checking out.

If you’re going to pay for a music player, make it Shuttle+, and not Poweramp (it’s a disaster when it comes to user experience).

Shuttle+ fits really well with all other Material Design app and thanks to tabs UI, navigating between artists and albums is really easy. 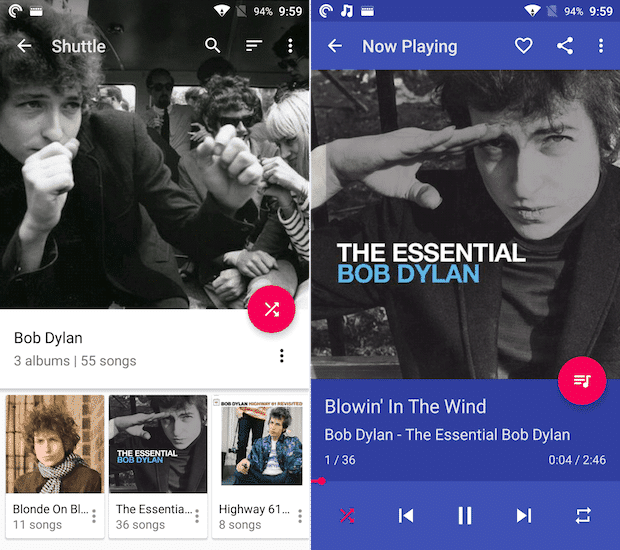 And Shuttle+ is feature rich. Lots of themes, 6-band equilizer, Chromecast support, embedded lyrics support, album art downloader and best of all – a user interface that doesn’t suck. All for just $1.49 (Rs 20).

If you want to totally nerd out on how your homescreen is laid out, Nova Launcher Prime is pretty much the best bet. The free version of the app is plenty powerful itself but the paid version gives you access to gestures, custom drawer groups, icon swipes, scroll effects and a lot more. 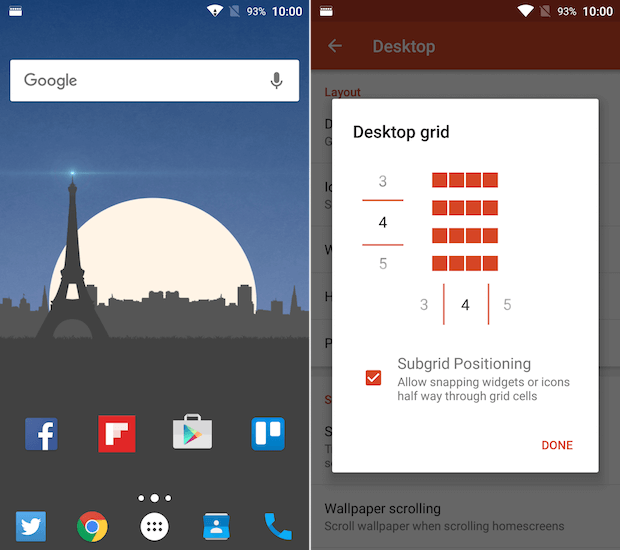 I don’t need to go into much detail about Prime here because the internet is filled with praises and guides. TechPP has itself published what I think is the definitive guide on customizing Nova Launcher. It’s also worth reading Android Central’s piece on how Nova Launcher might be the best thing that ever happened for Android. All that goodness for just five bucks (Rs. 150).

Action Launcher 3 is kind of in the same category as Nova but not really. While Nova is about customization, Action has lots and lots of powerful features to help you do one thing and one thing only – launch apps. In a better and faster way than you ever thought was possible. 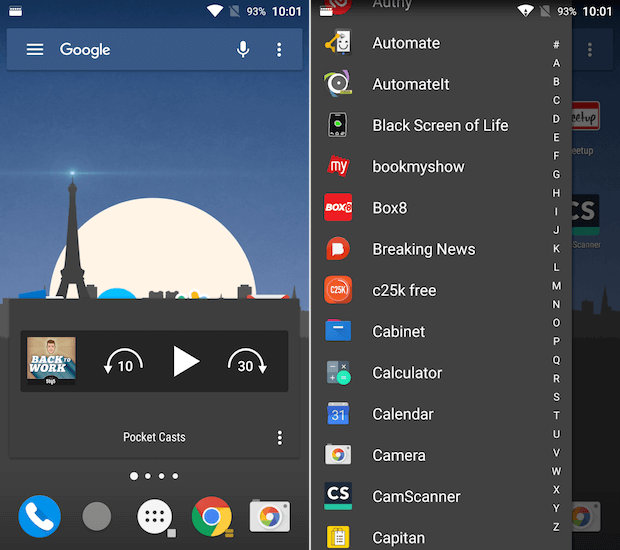 And you’re goona wanna pay for the upgrade because that’s where the action is. Other than the sidebar, you can define swipe up gestures on app icons that display widgets, you can have a whole sidebar dedicated to apps and widgets, and you can created folders with shortcuts to quickly launch the first (main app) in it.

I tried Action Launcher for a couple of weeks and turns out, it’s not for me. I’m more of an EverythingMe kind of person (RIP). But that doesn’t mean it won’t work for you. Check out the free app and upgrade for $4.99 (Rs. 299).

Monument Valley is probably one of the most beautiful games I’ve ever played. It’s a simple game. Some might call it really simple for a puzzle. But it’s a platformer that bends the rules of physics. You’ll get to interact with the world with your fingers and literally move it around so that Elsa can get to the finish point.

And when I say one of the most beautiful games I’ve ever played, I’m not exaggerating. Check out the trailer below. And even if you think you’re not much of a gamer, trust me, you’ll get something out of this experience. For $3.99 (Rs. 245).

This one’s for the geeks. With Light Flow you can totally nerd out on how notifications are handled for each apps or person – via LEDs, sound or vibrations. And lots of granular control over each feature.

You can set repeating notifications, assign special LED color for specific apps and lot more. All this glorious nerdery for $2.49 (Rs. 12)

Boy have we come a long way from those ugly weather widgets and apps from Gingerbread era. Weather Timeline though, is a delight. With cute and poppy Material Design animations and those cheery colors.

Weather Timeline provides a timeline for any location you choose. This can be broken down in hours and you can choose any day in the future that you choose. The app is filled with visual representation like animated icons as well as graphs. Shield yourself from bad weather apps for just $0.99 (Rs. 57.99).

ES is one of the prime examples why we (the Android power users) should start paying for apps. ES, an app beloved and used by 100s of millions of users (not kidding), recently took the turn for the worst. It went from being an over the top feature rich app that let you do 38 different things (a geek’s wet dream) to basically selling out in a way that negatively affects the user. The developer didn’t ask for donation and didn’t introduce paid upgrades. 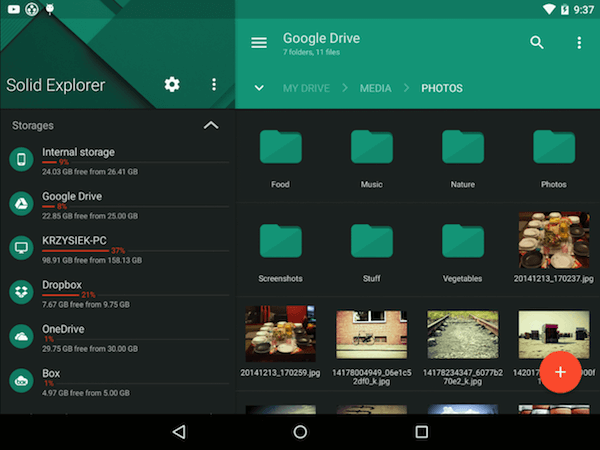 Instead they started adding cleaner utilities (bloatware), started spamming notifications and in the past 6 months made multiple bad attempts at redesigning the app with Material Design.

All this has left ES almost unusable.

So it’s time to switch to Solid Explorer and pay for it. You can get a 14 day trial and after that it’s just $1.99 upgrade (Rs. 70). For that you get almost all the features of ES that you love – easy copy/paste, cloud sync, SMB, FTP, Chromecast support and more.

Oh and Solid Explorer doesn’t look like it was designed in 2008. And it doesn’t work like an Eclair app running on Marshmallow either.

Android lacks minimal and beautiful Markdown editors. Thankfully, iA Writer is here to fill in the gap. If you’re a Mac or iOS user, you might have heard about iA already.

They’re a small shop that create delightful Markdown editors. Along with Dropbox sync support, you get a fast app, stunning typography, a shortcut panel and a focused environment that doesn’t distract you from writing. 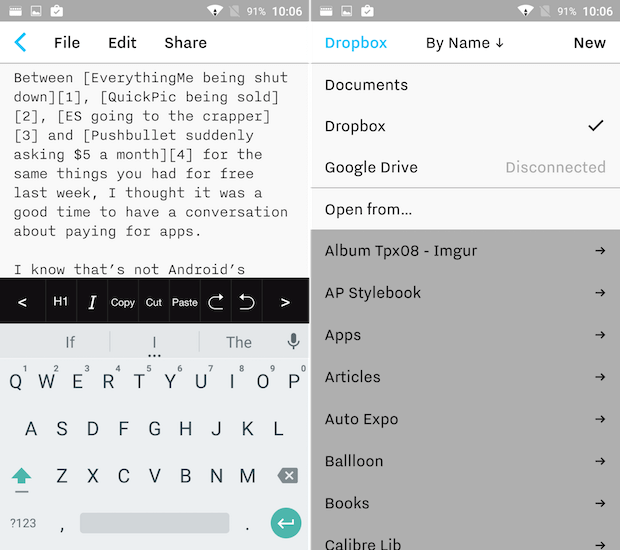 After LastPass’s sale to LogMeIn, it was clear that 1Password was going to be the new go-to password management app. Yes, the desktop apps are expensive ($50 each) but these are all your passwords we’re talking about.

1Password doesn’t upload your passwords to the cloud. They’re stored locally, encrypted and can only be opened using a master password. You can keep this database file in Dropbox if you want – which makes it easy to sync password between devices. But if you don’t want to do that, they also have a Wi-Fi sharing option.

1Password is easy to use and provides autofill option using both a keyboard and a notification bubble. If you’re on the fence, you can try out 1Password for a month before buying it for $9.99 (Rs. 648.89).

If you’re a fan of pattern based and minimal wallpapers with a funky color palette, you’ll love Evolve. It’s a two man operation. Designer David Ratkovic and developer Andrew Quebe are constantly updating the app with new wallpapers (130 and counting) and features. So by buying Evolve, you’re directly supporting David and Andrew’s work.

I was pleasantly surprised and delighted when I came across Chrooma. Here was an unassuming Material Design wallpaper app with so much potential. Chrooma is an app that generates new pattern based wallpapers that follow Material Design guidelines at set interval of time (or when you hit the home button).

And it’s amazing how customizable it is. You can select the pattern, the colors involved, animations, the interval – everything. And then let Chrooma delight you with a nice animation and a new pattern wallpaper – each that looks more beautiful than the last for $1.32 (Rs. 87). I recently found out that they have gone further and created another app that does the same thing but for shapes instead of patterns.

That’s all from my side. Share your recommendations in the comments below.

Was this article helpful?
YesNo
TechPP is supported by our audience. We may earn affiliate commissions from buying links on this site.
Read Next
12 Best Free PDF Readers for Windows and Mac in 2023
#android apps #Best Android Apps #Best Apps