Samsung is one of the first companies to get involved in the Virtual Reality endeavors and now the company has unveiled the 360-degree camera called the Gear 360. The camera has been unveiled along with the Galaxy S7 and the S7 Edge at the MWC and it comes in a shape that not only looks outlandish but also resembles a human eyeball, which might creep out some people! 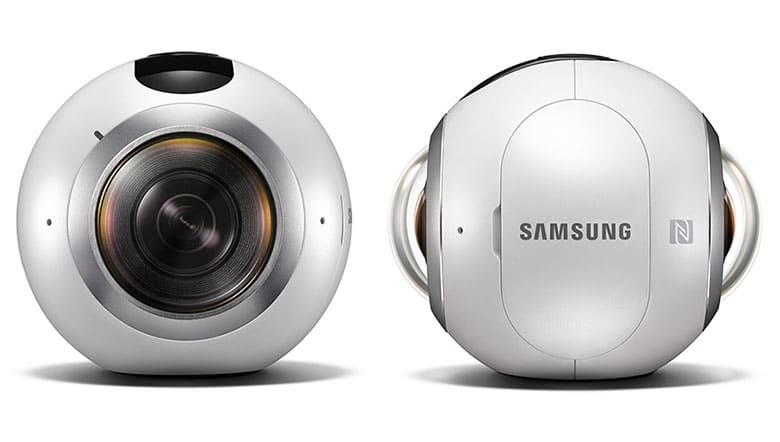 The Gear 360 is a tiny spherical camera made up of double lens and capable of shooting 360-Degree photos and videos. If observed carefully, you might notice that the camera is flat at the bottom so that it can rest on the flat surfaces and it also latches in to a standard tripod mount. The controls on the Gear 360 at the outside are kept to bare minimal with just the record, menu and power buttons.

The Gear 360 is splash proof and even though it might survive an occasional splash or two, we think it is not advised to submerge it in water. As we stated earlier, the 360 Gear is made up of two opposing f/2.0 lenses with a wide 196-degree view and the footage captured by both the lens will be stitched together by the software.

Those who have used 360-Degree camera rigs or even action cameras will be familiar with the fact that most of the camera functions need to be controlled in the companion app rather than the limited buttons on the camera’s exoskeleton. Now the plot twist comes in the form of compatibility issue, Samsung has not yet outlined if the VR camera will work with all of the Samsung phones or as a matter of fact even the non-Samsung phones. It is most likely that if you don’t own a Samsung phone, the stitching and all of the post processing needs to be done on a PC app, thinking about which it doesn’t seem convenient at all.

Gear 360 is capable of shooting 30-megapixel spherical photos and videos at a resolution of 3840 x 1920. Lately, the 360-Degree videos have been catching up especially after YouTube and Facebook have started supporting the same. The 360-videos are touted to catch up at a faster pace this year and it will be interesting to see how the Gear 360 will blend in the market, and compete against the likes of Nikon KeyMission, Ricoh Theta and Giroptic. Availability for the Gear 360 is scheduled for the second quarter of this year, and there is no pricing yet.