Google recently launched their cross-platform barebones video calling application, Duo for iOS and Android users. The primary appeal it brings to the market is the spontaneity and a more natural way to video chat. However, now Facebook seems to on a trail for diverging Duo’s Millions of users onto its Messenger app with a new feature called “Instant Video”. 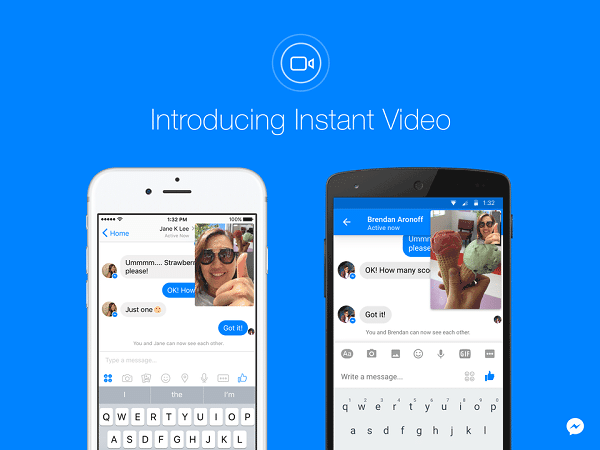 Design wise, the whole experience has been kept identical but now when you tap the “video call” icon while chatting with someone, a floating window will pop up which will commence your live stream instantaneously. The audio is off by default and the person on the other side of the chat doesn’t necessarily need to pick up the call for viewing the caller stream. This is, more or less, exactly why Google Duo gain traction but with Facebook bringing the feature directly onto its Messenger app, users might bid farewell the former. Sure, a lot of people prefer Duo’s straightforward interface and astonishingly better performance even on crappy networks but they also don’t want to keep two apps on their phones for the same purpose. Instant Video on Messenger is now rolling out to Android and iOS, so make sure you have the latest version to test it out.

Here’s how Facebook describes it, Instant Video is a reflection of the ubiquity of video — we simply expect to have that ability in real-time, all the time. With Instant Video, you can bring your conversations to life in the most authentic way — seamlessly and instantly. It’s perfect for sharing quick moments with friends who aren’t right by your side or making your conversations richer by seeing each other face-to-face when you are messaging.

The social network giant has been pushing forward each and every of its services to take on the contenders. Not long ago, they introduced a video-based application strictly for teenagers, WhatsApp is finally making use of its immense user base to lure in businesses and Instagram has been constantly getting updates that bring Snapchat-inspired features and abilities. With over 1.5 Billion in total, Facebook’s ever-growing empire might finally become the ultimate destination Zuckerberg has always dreamt of.

Was this article helpful?
YesNo
TechPP is supported by our audience. We may earn affiliate commissions from buying links on this site.
Read Next
How to See Liked Posts On Facebook [2022]
#facebook #Instant Video #Messenger