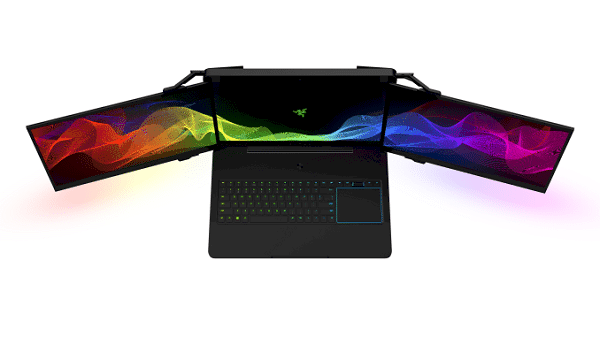 So how does it fold? Ah, prepare to have your mind blown. Razer has opted for a butterfly design and the two displays have a motorized hinge that puts them in the edge positions whenever required and neatly slides them back under the main panel when closed. It’s definitely one of the greatest pieces of engineering advancements we’ve witnessed at this year’s CES but as I said, it’s still a prototype and won’t be available to purchase anytime soon.

The rest of the hardware though remains identical featuring a full-sized mechanical keyboard, Nvidia GeForce GTX 1080 graphics card, weighs around 12 pounds, and is 1.5 inches thick. The laptop obviously is VR-ready, however, Razer hasn’t revealed the complete spec sheet. The additional displays ( which also have lighting strips under them) will surely impact the battery life significantly, although you can turn them off but why would you? It’s not like customers are going to travel with it.

Razer has surely defeated the purpose of having a cumbersome desktop setup with Project Valerie as the laptop packs everything from a premium mechanical keyboard to “multiple” 4K displays. It will be interesting to see what other manufacturers will come up with as this trend gradually takes over the industry. The pricing too hasn’t been officiated, but the Razer Blade Pro itself costs $3499, so that should give you an estimate.

Was this article helpful?
YesNo
TechPP is supported by our audience. We may earn affiliate commissions from buying links on this site.
Read Next
With Football Manager 2023 Touch, Apple Arcade finally has its “killer ...
#CES 2017 #gaming #laptop #Project Valerie #razer