It has been around 41 years since the Cupertino mammoth has been advertising and it has been a roller coaster so far. From early Macintosh ads to ‘Shot on iPhone’ ads, Apple has tried to provide something new on the table each time it has advertised any of its product in the simplest possible way. Yes, the release of the iPhone 7 teaser made us miss the simple, straight and direct approach that Apple generally uses in advertising and wonder if things were changing, but with its recent AirPods ad campaign, the company is back where it belongs in the ad land – right near the top. 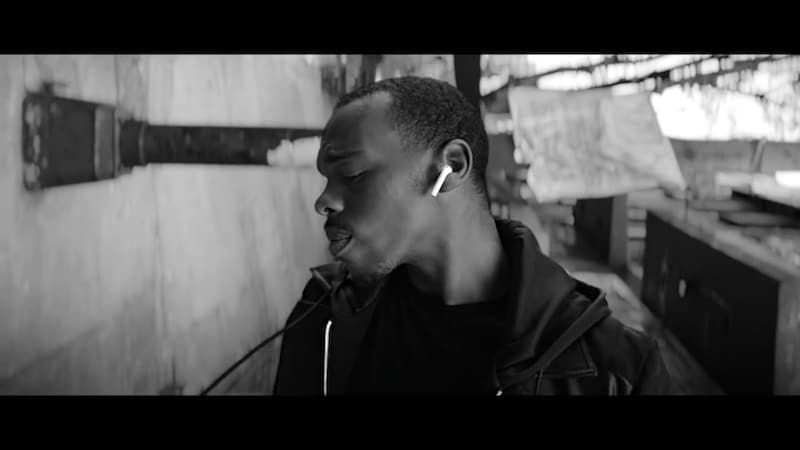 For those from another planet, Apple introduced its first ever wireless earphones– the AirPods along with iPhone 7 and iPhone 7 Plus. Although they arrived in the market only a few weeks back, ever since Apple took the wraps off the device, AirPods have become the ear (if not eye) candy which everyone clearly does not like but cannot stop talking about. AirPods have been repeatedly criticized and made fun of because of their conventional or as some might call it ‘boring’ design. Apple has countered with a series of ads in which the spotlight remains on the AirPods throughout, showing why they are special even if they look “normal.”

Out of the four ads which were released, the “iPhone 7 + AirPods – Stroll – Apple” is the lengthiest. The ad lasts for 1.01 minute and features dancer Lil Buck dancing to the song ‘Down’ by Marian Hill. The star dancer features in two other ads of the same campaign while the song is featured in all the four ads. All four ads stick to a black and white theme, keeping things simple and uncluttered.

Dance, Lil Buck…and you can leave your AirPods On!

The ad begins with Buck sitting in a city that looks straight out of the nineties. Then the dancer opens up his AirPods case and the pairing icon appears on his iPhone 7 screen. Although the ad series is based on a black and white theme, but Apple very cleverly has just kept the battery signals for the iPhone and the AirPods in green color along with the AirPods case light. The ad impressively builds a story in just a minute keeping the product in the limelight. It establishes the fact that the impressive sound quality of the wireless earphones takes the dancer to another hypothetical world where he can be seen dancing on unusual surfaces like on a wall, on the sides of the car, upside down on the rooftop of a theater!

The ad also puts it out there that Apple has paid a lot of attention to little details. For instance, the music stops when Buck takes the AirPods out of his ears and again the ambient sound of the city comes up – they have portrayed that the dancer being in an imaginary world and then suddenly shown him back in the real world. 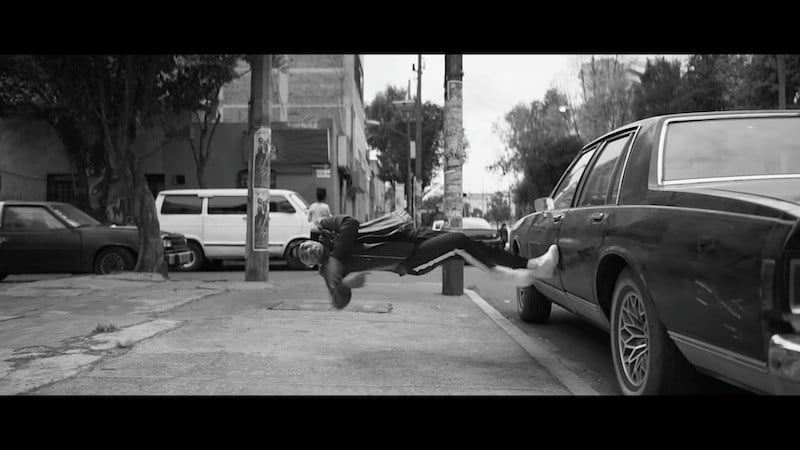 The idea is very out of the box and Apple surely bags points on that and the fact that it also answers perhaps the biggest query about the AirPods – whether the AirPods are stable enough to stay in the user’s ears. With minimal copy and hardly any colors and in one minute, the company shows the sound experience, the stability and the ease of use without actually “talking” about it. The ad in a very simple, direct and rational way showed how there was much more to the AirPods beyond their boring design.

We think Lil Buck’s move did not let us take our eyes off the screen even for a second and the song just added to the feel of the ad but the best part of the ad was the fact that although there were a ton of things that were happening in the ad which could have distracted us very easily but the attention was never really taken away from the product. The ad ends with the copy which says, “AirPods on iPhone 7” followed by “practically magic” and then ends with Apple’s logo.

The (Lil) Buck does not stop here

Two out of the other three ads also feature Lil Buck. The two ads which last for about 16 seconds each highlight different features of the device. One titled “iPhone 7 + AirPods – Siri – Apple”(https://youtu.be/QvPHny-bRQU) shows how one can use Apple’s virtual assistant Siri by just tapping twice on the AirPods. In the ad, Lil Buck double taps on the AirPods and asks Siri to Play the song ‘Down’ by Marian Hill. The song immediately begins and the Bucks starts dancing. The ad begins differently but ends with Buck dancing on the wall from the first ad with similar copy followed by the company’s logo.

The “iPhone 7 + AirPods – Pairing – Apple” highlights how easy it is to pair the wireless earphones with the iPhones. This ad also features Buck. Buck in the ad just opens the AirPods case and the pairing option pops up on his phone screen. Even in this ad, the battery signal for the two devices and the case light is green colored, while everything else follows the black and white theme.

The 16-second ad briefly talks about the ease of use and talks about the connectivity in just one go. Just like the other two ads explained above, even in this one Apple has incorporated the city noise but only for the time till Buck connects his AirPods to his iPhone. As soon as the song starts playing, Buck is shown dancing on the side door of a car. This is followed by the copy which says, “AirPods on iPhone 7”, and “practically magic” on top of the visuals and ends with Apple’s logo on a black background. 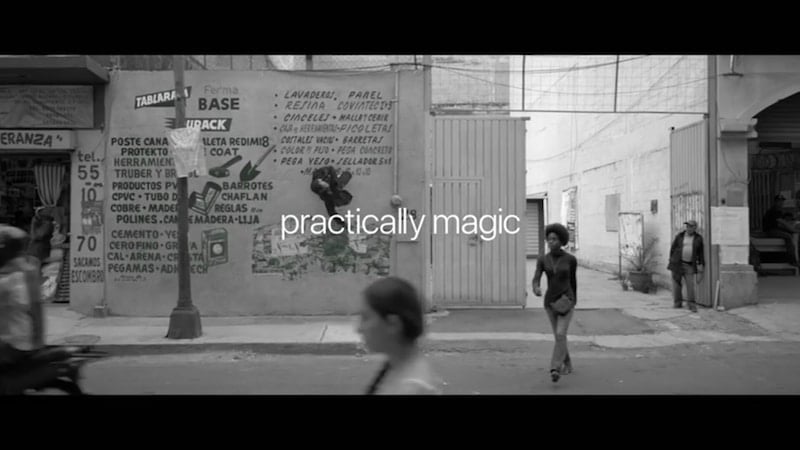 The ads may be brief, but Apple has tried to pay attention to detail (the ambient sound of the city which is there until the time Buck connects the AirPods to his iPhone or asks Siri to play the song, for instance). The fact that the ads very cleverly borrow visuals from the lengthy one really builds the connect between all the three ads. The best part about the three ads is the fact that although all three are closely connected and feature the same visuals and dancer to some extent, all are totally independent of each other and can be aired separately and each one would still make sense. And that is what actually makes it for us. All the three ads are perfectly synchronized yet very different and highlight different aspects of the same product. Apple has just kept it simple, connected and direct and that is what we expect from Apple. In terms of advertising at least.

Finally, the Buck gets passed

Last but not the least is the ad which stands apart from the crowd but still remains an integral part of the series. The fourth ad does not feature Lil Buck or his moves or the city setting but it still took us back to the first three ads instantly. Titled, “iPhone 7 + AirPods – Notes – Apple,” the ad may be created on a totally different page but remains the part of the same book. This one is also just as brief as the other two we discussed previously: it lasts for only 16 seconds (Apple paying attention to the small things: all the three brief ads have been precisely created to last for 16 seconds. Not a second more or less.) Even this ad follows the good old black and white color theme and runs on the song “Down”. 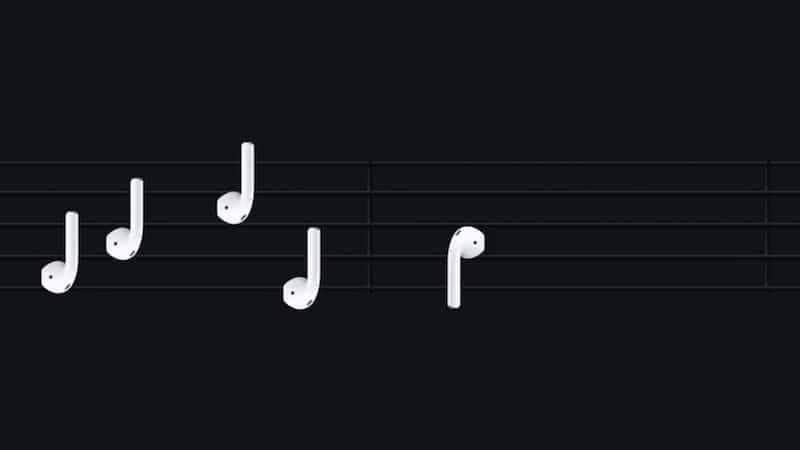 Apple has very smartly placed the AirPods just on the strings which are being used in the song at that very moment, acting like the notes of the songs and hence the name “Notes” in the ad name. This is shown for around 10 seconds and then the copy takes the stage and mentions, “AirPods on iPhone 7” which is then replaced with the visual of an iPhone 7 with the AirPods pairing icon on the screen and an open AirPods case and ends with the company’s logo. And it hits us like a visual power punch.

We loved the fact how Apple has used the AirPods as notes in the ad and has connected the device to music – after all, music is likely to be the most common used function of the AirPods. The ad also highlights the design of the product and in this ad, it just focuses on the AirPods. There are no dancing or city settings (not that we mind it) but the ad is short enough to remain engaging and the presentation is stark, simple and effective.

All the four ads were direct, connected and simple. To us, they kept the product in focus and tried to answer the questions and confusion hovering around the product. All in all, we think the campaign deserves a thumbs up. Yes, we are not convinced that the AirPods are good looking. But we know they are easy to use, won’t pop out of our ears easily, will invoke Siri and deliver good quality music. Our conclusion about the ads: mission accomplished.

Was this article helpful?
YesNo
TechPP is supported by our audience. We may earn affiliate commissions from buying links on this site.
Read Next
Best Places to Buy Refurbished MacBook or Mac [2023]
#Ad Review #Airpods #apple #Tech Ad-ons