There has been a lot of outrage and confusion over Snap CEO’s Evan Spiegel’s alleged comments on India and Spain being poor countries. One of the casualties of the confusion has been the totally unrelated Snapdeal e-commerce portal which has been subjected to several low ratings, for the sin of sounding like Snapchat! As if having to compete with Flipkart and Amazon was not tough enough. 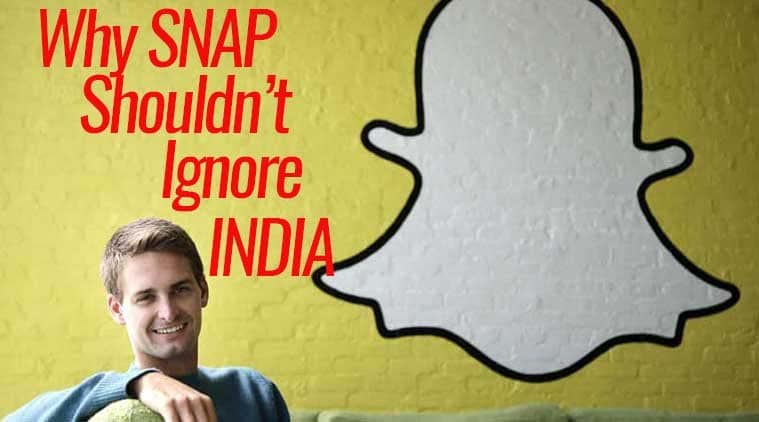 In between all this outrage and confusion over Snapchat, one interesting debate took place as to whether Spiegel was right in ignoring India – of course, that is assuming he actually made the remark attributed to him. While some people felt that Snap’s decision to ignore India was justified, I feel it was not. No, this is not me getting into a nationalistic and patriotic frenzy. It actually makes very little rational sense for a company like Snap to ignore a market like India.

I would be the first one to agree that India is a low average revenue per user (ARPU) country. There is no getting around this fact. One has to admit that any particular product or service sold in India would fetch a far smaller ARPU when compared to developed countries such as the US and the UK. Being a social media company, Snap’s main source of revenue would be advertisements for the most part. Snap is dabbling a little on the hardware side of things as well but I am sure that in the medium term, advertisements would be its main source of revenue. When it comes to advertising as well, India does not rank very high in terms of ARPU. Data from Facebook supports the same – check the graph comparing Facebook’s ARPU for various geographic regions. As is evident from the graph, the ARPU of India which would fall under Asia is multiple times lower than others. While US and Canada are commanding close to USD 20, Asia as such is barely able to pass beyond USD 2. One also has to note that Asia also includes countries such as Japan, South Korea, and Singapore, so India’s actual value might be even lower and somewhere around USD 1.

It is easy to take the ARPU data point and term India as a less than promising market but what most people forget is that what India or rather any other emerging country lacks in terms of ARPU can be made up for in terms of volume. India has a population of more than a billion people and it’s estimated that around 50 percent or so of those people are aged under 25 years. So the target market is definitely far bigger than any other developed country on earth. To provide some more context on India’s potential size and the kind of volume (user base) that the country can provide, take into consideration WhatsApp Messenger. Snap’s user base in North America is around 69 million whereas WhatsApp’s user base in India alone is estimated to be around 200 million.

One must keep in mind that Snap has 69 million people in the US despite the market being saturated in terms of smartphone penetration. By comparison, India’s smartphone penetration hasn’t even crossed 30 per cent and WhatsApp’s user base in India is already almost four times bigger than Snap’s user base in America. While I agree that ARPU in America is far higher, one must also keep in mind that the Indian ARPU is bound to improve with time and even a gradual improvement in Indian ARPU, when compounded with the massive user base/volume that India can provide, would automatically improve revenue/profits from India.

Certain industries such as telecom and retailing are capital intensive. Every time these industries decide to physically expand their footprint, it costs them a lot of money. For example, if a telecom company like Telenor wants to enter India, it would have to buy spectrum, purchase BTS, set up customer service centers, etc. Similarly for a company like Amazon to start its e-commerce business would entail huge investments in fulfillment centers, delivery personnel, customer service, etc. If these companies that belong to capital intensive sectors are willing to invest in India, then why can’t Snap? Amazon has been investing billions of dollars in India ever since its inception, betting correctly that the payoffs in future would be worth the early investment. Similarly, Jio has invested close to USD 22-25 billion in India, even though it would be years before Reliance manages to get any returns on its telecom venture.

By comparison, Snap’s expansion in India would not cost even a fraction of what Amazon and Reliance are investing. Indeed, despite not having given any special attention to India, Snapchat already managed to have close to 4 million users, thanks to the app readily being available on Play Store and App Store. India already has a vast English-speaking audience which means any app developed in America can easily be reused in India with little to no difficulty. In comparison, if an American company wants to compete in China, it would have to redo its app from scratch in order to match the language of the local audience. A little attention to India like adding filters for festivals like Holi, Diwali, etc, could do wonders for Snapchat’s growth. Opening a small office in Bangalore and hiring a couple of designers to make India-specific filters and a manager would be a minuscule cost to Snapchat that would deliver great results in a very short time, compared to the kind of investments that Amazon and Reliance have embarked upon.

3. The app IS the Internet

India is a largely barren land in terms of technological development for a lot of people. Many have never ever used a PC. For these people, the very definition of Internet is limited to one or two apps that they keep using on a regular basis. For a number of people in India, WhatsApp or Facebook are the Internet. So, in essence, if a technology company makes the first move in India, it can very effectively control the entire digital life of an individual. This is already very evident in China which, like India, is a ‘mobile-first’ country. Companies such as Tencent via apps like WeChat pretty much control the entire digital life of their users. This is not possible in developed countries where users are comfortable using different apps for different purposes, but can very well be implemented in countries like India, China and Indonesia.

Facebook arguably has made the most effort in owning the digital lives of Indians through apps like Facebook, Instagram and most importantly, WhatsApp. The result of this is visible. A reporter in rural India has managed to build a livelihood off a WhatsApp group. Meanwhile, some other WhatsApp groups in India even operate a black market for selling OTPs. Basically, WhatsApp is acting as a replacement for the Internet as a whole for a part of India just like WeChat in China. I also feel that this aspect of owning the entire digital life was the reason why Facebook was so vigorously backing Free Basics in India despite significant opposition from activists.

Facebook also has not had any qualms about using its properties to stymie Snapchat’s growth. The roll out of stories across WhatsApp, Instagram, Facebook Messenger and even Facebook has meant that Snapchat has lost one of its key differentiating factors. I have already seen an increase of Stories on WhatsApp and Instagram in India amongst my friends. The stories on Whatsapp especially are not really as rich as the ones on Instagram and Snapchat but that is unlikely to affect its prospects much given the sheer network impact of WhatsApp – people who have started using stories on Whatsapp would continue doing so on Whatsapp itself because Snapchat, by comparison, has a much weaker impact. In the case of social media, I feel that even a relatively mediocre product with a strong network almost always wins over a superior product with a weaker network.

In fact, I feel the real reason why Facebook so aggressively rolled out stories on all its properties was to prevent users in underdeveloped countries from jumping onto the Snapchat bandwagon. It seems to be working. Take a look at the graph below of Snapchat’s user base during its IPO filing – its growth in the ‘rest of the world’ apart from the US and Europe has been essentially flat and this flatness coincides with Facebook’s rollout of stories to its various products. 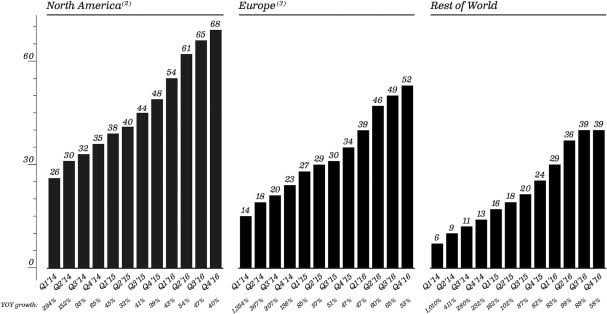 China might be a larger market in sheer numerical terms for international expansion but it is becoming increasingly evident that it would not be easy for a company to be able to break into the Chinese market. Censorship issues coupled with the government’s back-handed support for domestic companies makes the going tough for international players. That makes India the largest open market for any tech company. If one has a good product and the required network strength, then one can have a decent chance of succeeding in India. This is the reason why the likes of Amazon and Uber have been investing so aggressively in India.

Poor quality mobile broadband networks used to be an issue in India, but that seems to be changing. 4G networks are expanding rapidly and India also now has one of the cheapest data tariffs in the world. Operators are providing close to 1 GB of data per day for 30 days at just USD 5-6. That is at least 10-12 times cheaper than the international average. Snapchat is a data-heavy app but if someone has 1GB of data on a 4G network every day then even the heaviest of Snapchat users could be accommodated.

Snap into it, folks!

No, we do not know for sure whether Snapchat has deliberately ignored India. But what we do know is that it cannot really afford to do so, given the size and potential of the Indian market, especially given the improvement in connectivity in recent times. No, India is not a rich country, but hey, Amazon is opening fulfillment centers here, Netflix is deploying Open Connect Appliances at Indian ISPs, Facebook is planning to add UPI to Whatsapp and Google has done extensive work with YouTube Go and its free Wi-Fi service at railway stations. Can Snap afford to stay away?

Was this article helpful?
YesNo
TechPP is supported by our audience. We may earn affiliate commissions from buying links on this site.
Read Next
With Football Manager 2023 Touch, Apple Arcade finally has its “killer ...
#analysis #Evan Spiegel #india #Opinion #Snap Inc #Snapchat