About a month back, Microsoft did something tragic – they announced a new to-do app. Now, that might not sound as harsh as I just described it. Every company continues to experiment with apps. I mean, look at Google, they have almost seven just for messaging. But Microsoft, along with that, also said that they would eventually phase out Wunderlist once users settle down with the new one. Now, that also sounds quite fine, we’re getting a brand new and smart app in exchange for a six-year-old service, right?

What Went Wrong with Microsoft To-Do?

Microsoft To-do lacks the majority of features Wunderlist has been praised primarily for – seamless collaboration, hassle-free interface, cross-platform apps that work, multiple login options and a whole lot more. Microsoft To-do tries to simplify your daily routine, however, misses all the essential aspects that pro users demand and the worst part is that you have to necessarily use a Microsoft account to access it.

Despite all of that, though, I did make the switch to Microsoft To-Do. The company has provided an effortless migration option for existing Wunderlist and Todoist users. At first glance, Microsoft To-Do seems like everything Wunderlist could never be – intelligent and aesthetically more modern. There are a series of notable changes Microsoft has made in order to captivate current as well as new users. However, the app feels mostly incomplete and still a work in progress (it is actually in Preview) at some levels. The app tries to simplify your life by adding a “My Day” page that you can customize each morning by adding new and previously overdue tasks. But it lacks essentially all the rest of the features you’d want from a task manager in 2017 such as collaboration, cross-platform apps, calendar integration and more. 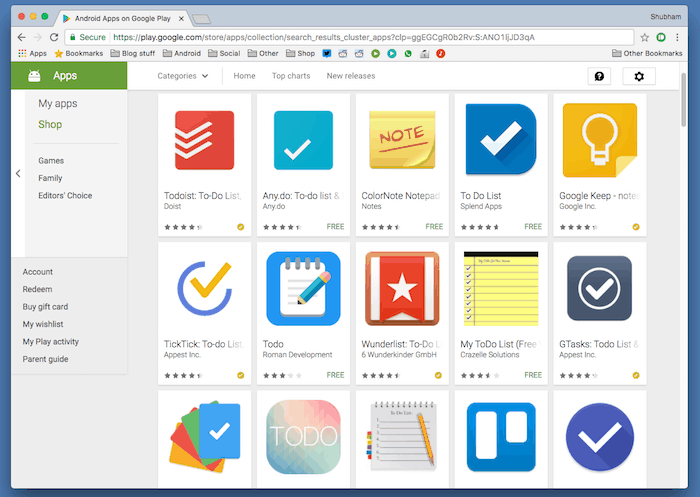 I was agitated and left stranded without a to-do app. I quickly hopped over to the Play Store to look for options, and as you’d expect, there was a myriad of them. I began with the app from which I started using to-do managers every day – AnyDo. To my surprise, though, it was quite similar to what I had used two years ago – the same old minimalistic layout across all platforms, swipe to check, what have you. AnyDo did get the job done, but it was way too much focused on design and substantially less on being utilitarian. I had to move on. I tried a few more applications past that like Todoist, but none of them could fill the void Wunderlist had left (*insert sad face here*). After weeks of testing, I landed on TickTick, an app I had never heard of but had one of the best ratings of them all.

TickTick fundamentally feels analogous to Wunderlist – a straightforward to-do manager that looks simple only from the outside. Inside, TickTick comes with every feature you can demand, and most of these are free (just like Wunderlist). Fire up TickTick, and you will be greeted with a basic list. The persistent bottom bar is what you will use to add tasks and its corresponding due date. Want to add more details? Tap the entry, and you will be able to append subtasks, notes, location, photos, attach reminders to each of them, priority or post comments.

TickTick has a client for any operating system you can think of from Android to Firefox to Android Wear. The biggest cornerstone of TickTick is, of course, its capability to handle any type of user with its comprehensive interface. The app also supports themes, can link your tasks to the calendar, syncs quickly with all of your connected devices or share list among your peers. It doesn’t pack any superfluous features that will come in your way. Although, I’m sure the company is already working on smarter integrations for managing lists.

TickTick, for me, is the perfect Wunderlist alternative and that’s true probably for you too. It’s free for the most part, simple, sophisticated and there’s no reason why you shouldn’t give it a shot.

Was this article helpful?
YesNo
TechPP is supported by our audience. We may earn affiliate commissions from buying links on this site.
Read Next
Voila AI Artist: Cartoon Yourself with the Power of AI
#app review #TickTick #todo app #Wunderlist