For the lazy bones

Xiaomi has now launched a new product on its Mijia crowdfunding platform. This time it is a smart IoT home kit made by its partner Aqara. It is called the Aqara Smart Bedroom set and is currently available for sale on Tmall. 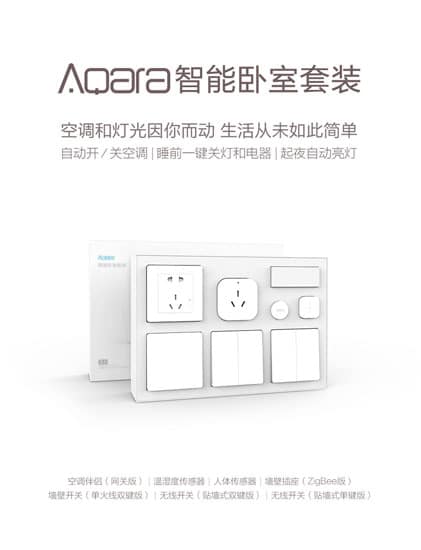 The Aqara smart bedroom set is essentially a combination of various IoT products. These IoT smart gadgets come with the ability to control your room lighting, air conditioner, switches and wall sockets directly from your bed. So, the Aqara smart IoT kit will surely ignite the lazy bones jones lying deep inside you.

Apart from that, the IoT set comes with a temperature, humidity and body sensor. Basically, the temperature and humidity sensor plays an integral role in controlling the air conditioner. The smart kit uses these sensors to detect the room’s weather condition before automatically switching on the cooler or humidifier. It does so by activating the smart switch and wall sockets.

Additionally, you can sit on your light directly from your bedside using the Aqara smart bedroom set. It also allows you to monitor your other home appliances using a smartphone app.

The Aqara Smart Bedroom set is priced at 749 Yuan. This sum up to Rs 7,360 or $114. Just like most other Mijia products the Aqara smart bedroom set will be exclusive to China. It’s highly unlikely that Xiaomi will be bringing to any of its international market. So, if you want to get your hands on one you are left with no option than importing it. That said, you would need to pay shipping and custom charges for doing that.

Xiaomi and Aqara had previously launched a smart curtain controller in the crowdfunding platform. Launched earlier this year, the controller works on Zigbee curtain and blinds. It is priced at 999 Yuan (Rs 9,800/$150.)