Nokia 6 Review: Plus Stability and Strength, Minus Experience

Nokia made a comeback in the smartphone world with a not-so-smart Nokia 3310. The company played the nostalgic card really well and did manage to get a lot of eyes on it. But now that the stunt is over, the company has launched a few “real” smartphones in order to get back into the field. Recently Nokia launched the Nokia 3, the Nokia 5 and the Nokia 6 in the country (and has also globally unveiled the Nokia 8). While these phones were launched a while back in the country, they have become available just recently. But are these guns big enough to bring Nokia back to where it was in the industry? We tried the eldest brother in the trio, Nokia 6 and here is what we feel… 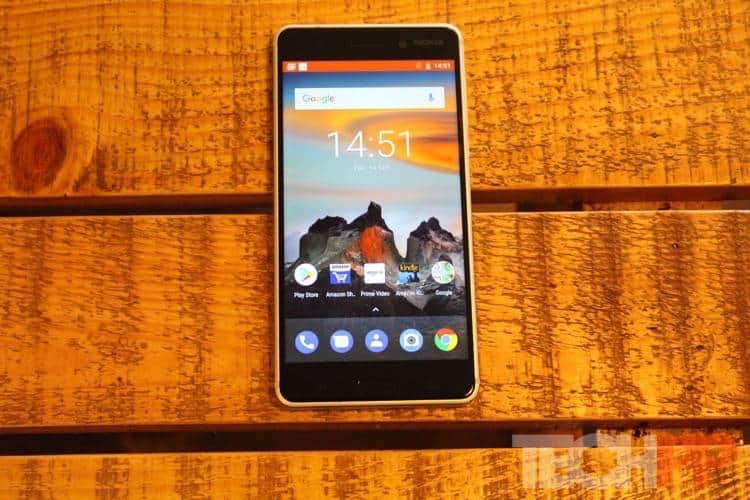 Strong and stunning in silver

The phone may be falling in the mid-range segment with a price tag of Rs. 14,999 but the looks are definitely premium. While we have complained a bit in the past about the safe and somewhat boring designs that companies have been using in this price segment, Nokia has definitely formulated a different design for this one.

One thing many people associate with Nokia is the strength and solidity of the phones, and you bet they will associate it with the Nokia 6 as well. The smartphone is made up of a single brick of aluminum, giving it a very solid, firm feel. It comes with a 5.5-inch full HD screen that covers most of the front. It has a 2.5D curved glass on top, protected by Corning Gorilla Glass. The display is bright and responsive and is big enough for you to enjoy movies and TV series. Just below the display are two backlit capacitive buttons and fingerprint scanner in the middle that works as a home button as well. Above the screen are the earpiece, the front camera and the proximity sensor with a Nokia logo on the extreme right. The fingerprint scanner takes a bit of time to set up but once done, works smoothly. 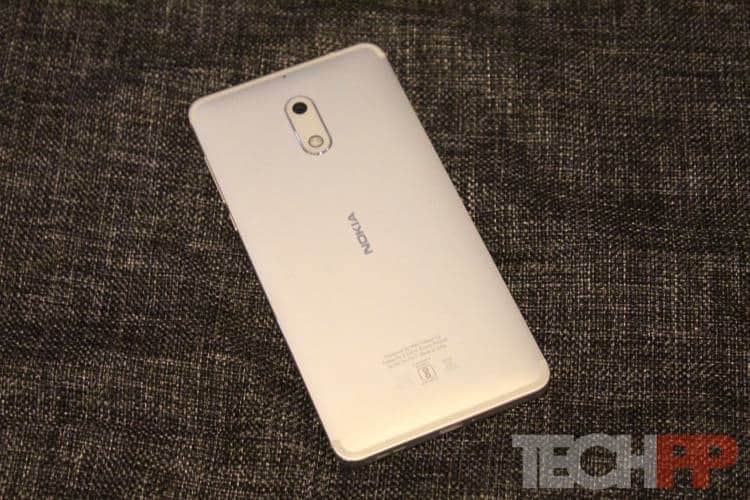 But it is the back of the smartphone that really makes it stand out. We got the silver variant of the device, and we do not remember the last time we liked a phone this much in terms of looks when it is not even black. It has a very matte subtle silver tone; the antenna bands are present in gray right on the upper and lower end of the back. Below the first antenna band, the company has placed the camera unit in a capsule-like shaped bump. It has the primary camera and the dual LED flash. Below the camera unit, the company has placed the Nokia logo vertically. 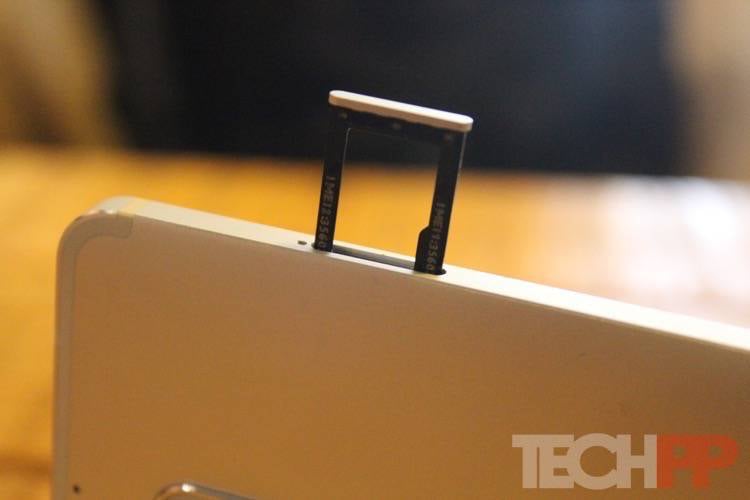 The top of the smartphone carries the 3.5 mm audio jack while the micro USB port and the speaker grille are present on the base. The left side of the phone holds the hybrid SIM card slot while the right side comes with the volume rocker and the power/display button. As we mentioned earlier, the smartphone may be mid-range in price but is definitely a looker. It measures 154 x 75.8 x 7.9 mm and weighs 169 grams. A bit on the bigger side but we did not face any problems while using it. And we are not going to shy away from saying that we loooved the smartphone design wise.

But there be lags

After looking at the phone for the first time, we actually got a bit excited about using it but the excitement ended soon. The Nokia 6 is powered by the Qualcomm Snapdragon 430 coupled with 3 GB RAM. It comes with 32 GB onboard storage which can be expanded up to 256 GB via MicroSD card. These are modest specifications for the price, given that we are getting devices with 4 GB RAM, 64 GB storage and faster processors at the same and even lower prices.

The smartphone behaved a bit oddly from the beginning. We frequently faced stutters as the phone would simply freeze for a split second while we were using it. And this is when we were not even in the heavy multitasking zone and were not juggling with 10-15 apps at once (and believe us, things got worse when we got into THAT particular zone). 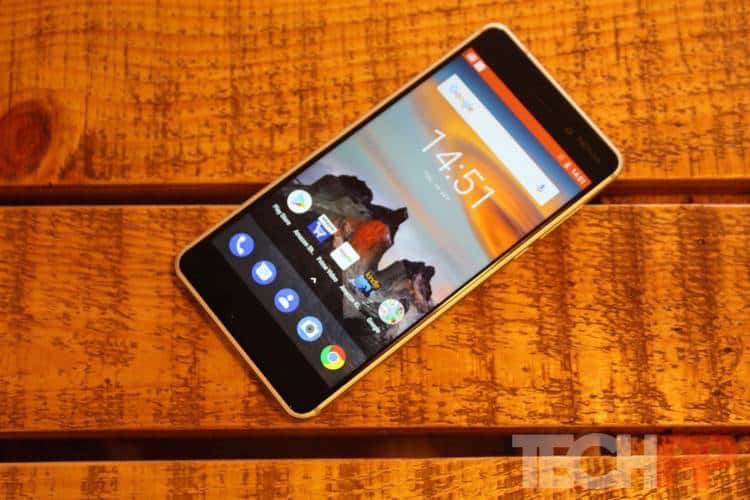 We tried casual gaming on the phone, and games like Subway Surfer, Temple Run 2 and Candy Crush ran just fine. But the performance really got butchered in the high-end gaming zone. We tried Asphalt Xtreme and NFS No Limits on the phone and the experience was pretty much painful. There were frequent lags and the apps also crashed a little too often. Even the camera app when launched from the home screen takes a second to switch on while the screen becomes white. Not just this, the phone also has a slight heating issue which only added to the problems. Nokia 6 scored 47069 on AnTuTu benchmark – and while we love humility, this was far too humble.

Decent camera, but not quite snappy fizz 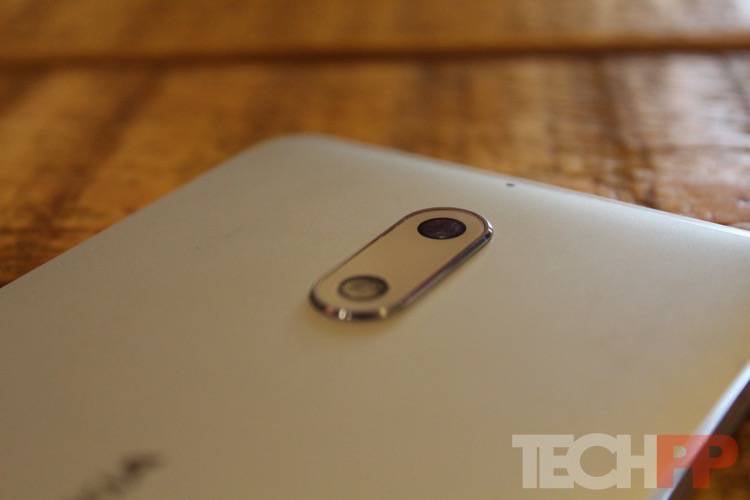 The primary camera did well in the detail department. Close-ups, landscapes, portraits, all were captured nicely in terms of details. The camera sometimes went off track regarding color and tended to oversaturate colors in broad daylight but did a fairly well job even in terms of color reproduction when shots were taken indoors or in not-so broad daylight. The phone handled glare well, but noise creeps in as soon as one moves to low light conditions.

The front camera of the phone was above average as well. We found our selfies sometimes a bit on the washed-out side, and the colors were not as great as they should have been but it reproduced good enough selfies for one’s Facebook. Just do not expect too much. 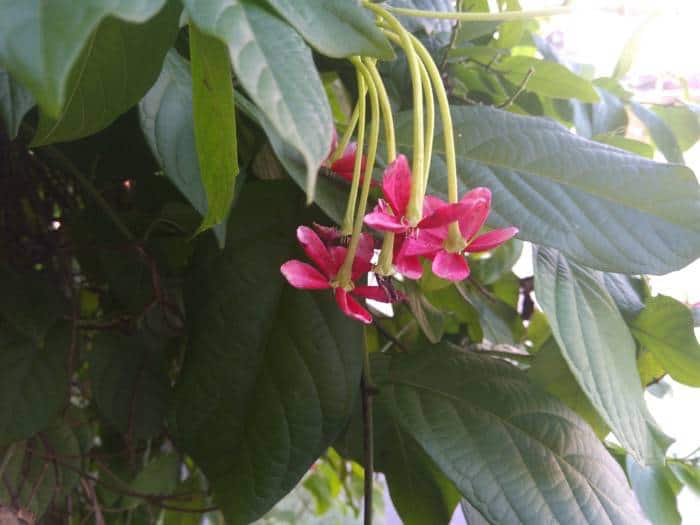 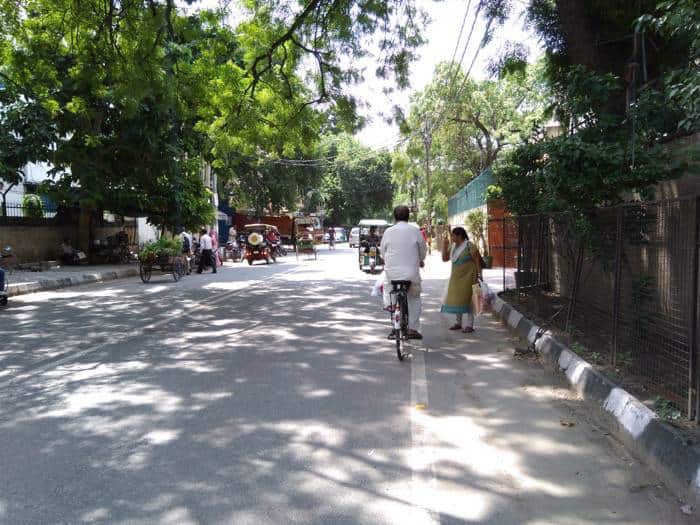 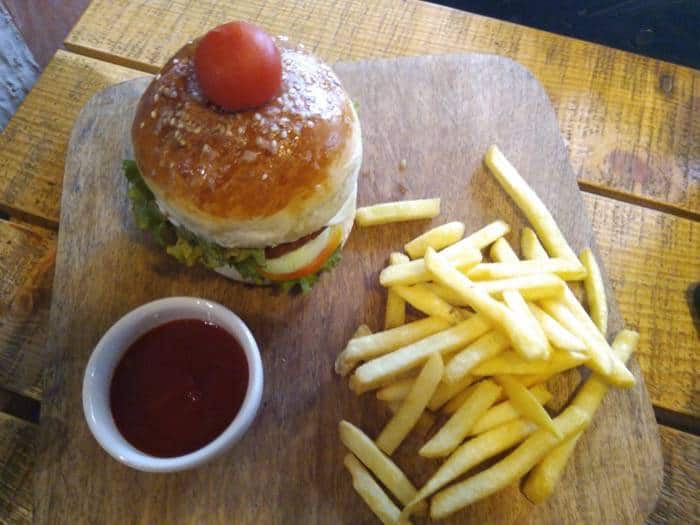 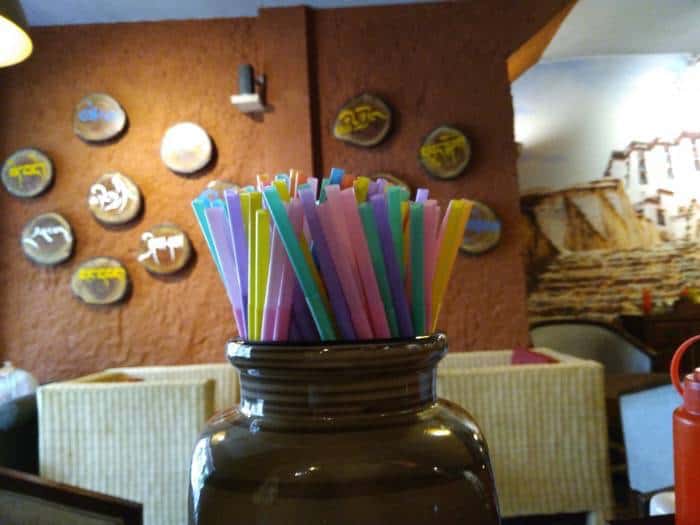 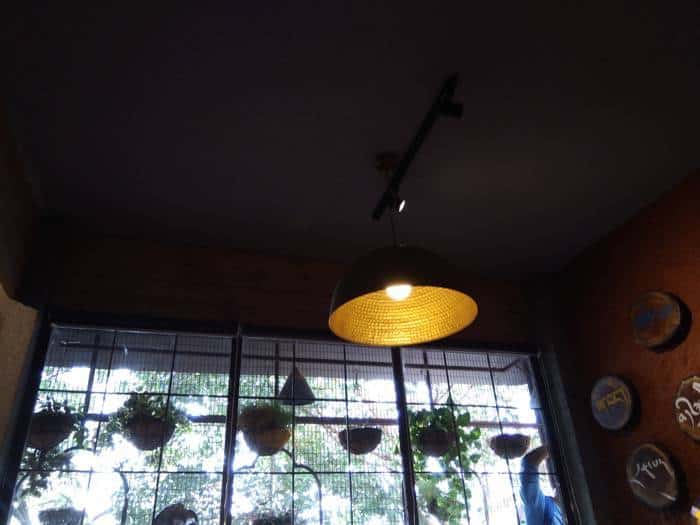 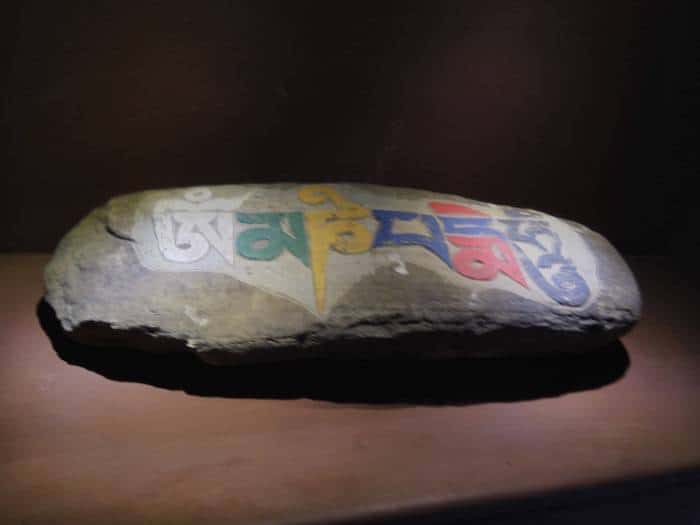 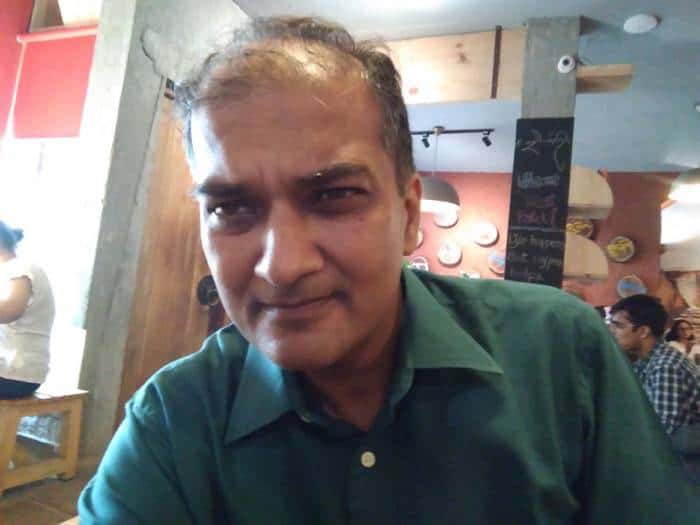 That aside, the smartphone is slow when it comes to the camera. It takes a while to launch the app, to focus on the subject and even to process the image. Because the phone is stock Android, there is not much to the modes here, as well. Just Panorama and beautify along with HDR. Overall, the experience remained a bit underwhelming, especially given Nokia’s history in cameras.

Back in the day when Nokia was pretty much the brand that ruled the smartphone world, it ran on Symbian OS. But the story has changed since the company has come back from the dead. Nokia is now betting on stock Android, and Nokia 6 is no different. The smartphone comes with stock Android 7.1.1 out of the box. But it has a few minor tricks up its sleeve. 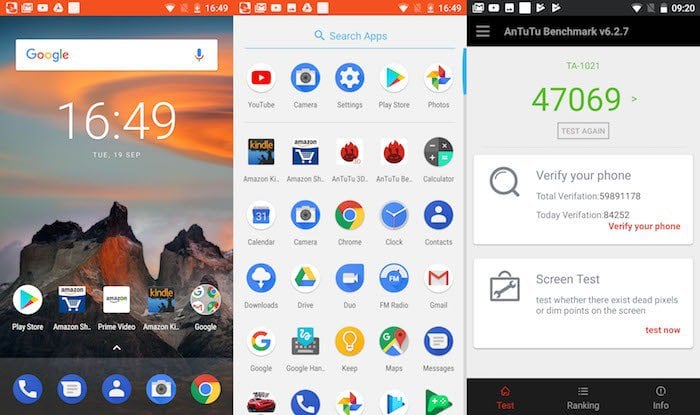 The user interface is clean and clutter-free. And there are hardly any third party apps on the phone. One of the best parts about having a stock Android interface is that it is familiar to use and easy. The icons are round, and you just have to swipe up to go to the menu, no app drawer. All of which makes things easy and light. And with stock Android 7.1.1, you also get the Google Assistant. Go ahead, ask for some jokes.

Moving on to the few tricks, Nokia 6 has got a Gesture and Motion feature much like what we see on Moto devices. These help you access the camera with a double press on the lock button or mute a phone call by just turning it over. Nothing outstanding but a few shortcuts never harmed anyone.

Nokia 6 is powered by a 3000 mAh battery which does not seem impressive, taking in consideration the size of the smartphone. That said, it performed well. The phone can see a day with you, working its way through heavy usage. That said, you would have to plug it in every night as it would not go as far as the other day. Under heavy usage, the phone can last up to 12-15 hours, while it can see almost full 24 hours if used moderately. There is not any fast charge support on the device, which is a bit of pain but not too disappointing at this price point (although some Moto fans might disagree).

We did not face any call drop issues with the device, and the sound on speaker seems loud and clear enough. The connectivity options on the device include Bluetooth, Wi-Fi, NFC, GPS, FM Radio and USB OTG. The phone comes with hybrid SIM slot support one SIM and a memory card or two network SIMs at once. 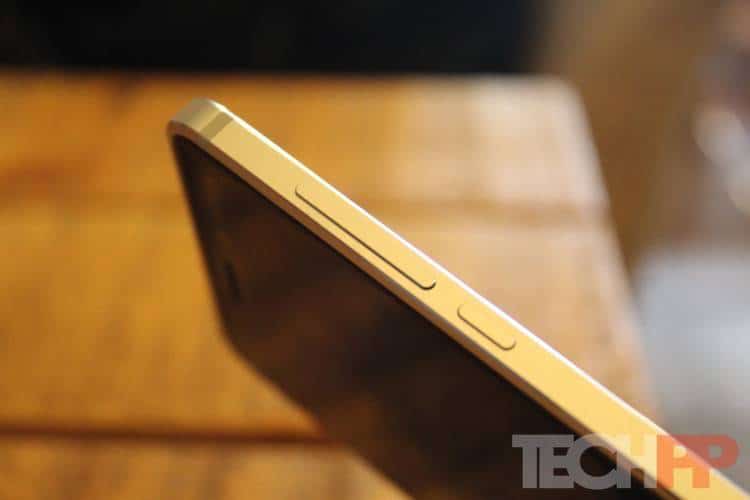 The Nokia 6 is a device with a great design, good display, and decent battery life. But while the design of the device is exciting, everything else looks a bit dull. While there are some positives, there is not anything which would make your jaw drop. The phone is priced at Rs. 14,999 in the market and it is actually on a bit of a hot seat right now, because standing against it are the likes of the Moto G5s Plus, the Xiaomi Redmi Note 4, the Xiaomi Mi A1, and the Lenovo K8 Note, all of which boast better processors, larger batteries and in some cases, better (and even dual) cameras too. Which leaves the Nokia 6 pretty much in no man’s land. Yes, it retains its traditional values of strength and stability but lags in the experience department. Literally.