Paytm was founded in 2010 as a mobile recharge app, it was one of the first apps to offer an online mobile recharge service. Slowly but steadily, Paytm added several layers of services including the ability to pay other Paytm users without the need for a bank account. In November last year, when India was drained out of cash after demonetisation, Paytm registered a rise in its growth and eventually, it has become a preferred method for both personal and merchant payments in India. 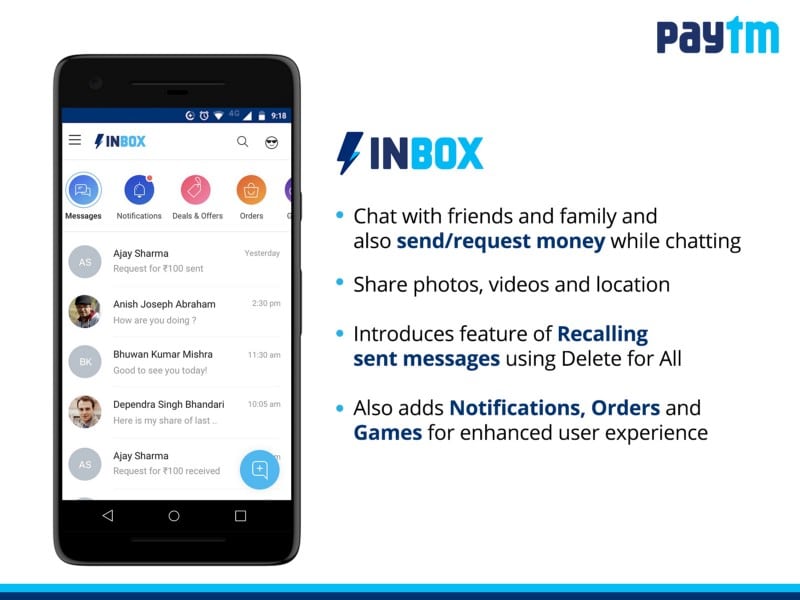 That apart, Paytm has also been instrumental in creating a space for mobile payments in India, a market that later attracted Samsung Pay, Google Tez and other payment companies to bring their services to India. Paytm is now all set to take on WhatsApp with its in-app messaging facility. The Paytm messaging service is called “Inbox” and is already available for iOS and Android users.

How Does Paytm Inbox work?

The Inbox service will allow users to chat in a medium that is end-to-end encrypted and offers a similar set of security features as any other messaging app like WhatsApp. With Inbox, one can also exchange media with others. PayTM is also offering an ability to start a private conversation, much similar to the one that is already being offered by Telegram.

PayTM has also baked in its core mobile payment option in the Messaging service. A bunch of other messaging apps like Hike Messenger and WeCHat are already offering similar services but none have the reach that PayTM has in India. In Paytm Inbox one can chat with friends/merchants and receive money in a seamless manner. The Ken recently reported on how WhatsApp is likely to bring its payments option to its service in India. The Paytm Inbox will test the waters for WhatsApp and is likely to spur a further growth in the mobile-based personal payment system.

Amazon is apparently holding talks with the RBI officials to explore several ways in which it can expand the Amazon Pay Service. The prospects of India’s Payment market is further bolstered by the Boston Consulting Group study that pegs the country’s payment market at $500 billion.

This is what Mr Deepak Abbot, VP of Paytm had to say, “The rationale behind the unusual move of adding messaging feature to the wallet app, which is used by over 200 million users in the country, was the realisation that there is a need of “social messaging, commerce and payments [to] seamlessly blend into one another.”

Not the First time

Paym has earlier experimented with an idea of connecting the buyers with the sellers and help them negotiate the terms and bargain the price. In fact, the Negotiate feature became so popular that nearly 30% of the Paytm users started using it within a year of implementation. The Paytm Inbox probably draws its inspiration from the negotiate feature but the Inbox is intended (as of now) to be more of a C2C offering rather than B2C.

TechPP is supported by our audience. We may earn affiliate commissions from buying links on this site.
Read Next
How to Setup Tap to Pay on Google Pay and Paytm
#Digital Payments #Mobile Payments #Paytm #Paytm Inbox