We know your iPhone is the heart of your social life, and it’s really frustrating when it freezes every now and then. When that happens, do not worry because your device can be unfrozen with a few simple steps. In this article, we will show you how to fix iPhone with forced shutdown/forced restart in the easiest way.

Before we proceed with learning how to force iPhone to restart, let’s learn how the regular restart or shutdown works on iPhone since even that isn’t straightforward if you are new to iPhones.

How to Restart an iPhone the Regular Way

If you have an iPhone X, iPhone 11, iPhone 12, iPhone 13, or iPhone 14, you would know that there is no Home button anymore, resulting in users needing to use different button combinations to access various functions compared to the earlier models. To restart iPhone X and later, press and hold the volume button and the side button until the power-off slider appears. You can then drag the slider to let your iPhone turn off (shut down). 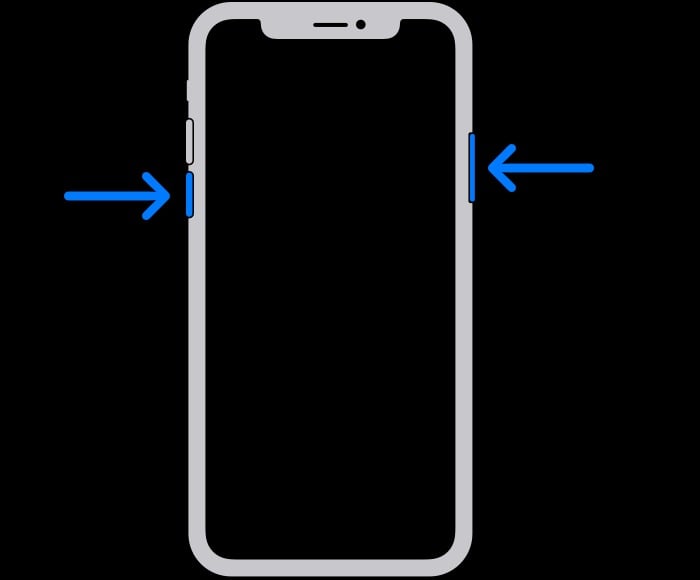 To restart/turn off iPhone 6, 7, 8, or SE (2 and 3), press and hold the side button until the power-off slider appears. Then drag the slider to turn the device off.

The real problem occurs when the iPhone is frozen, and you can’t turn it off or restart it the regular way.

How to Fix Frozen iPhone by Force Restarting iPhone

The most common cause of frozen iPhones is a software crash, especially if you recently installed a new app or update. It also happens when the phone is cluttered with other apps and processes, so it struggles to keep up. Fortunately, there’s an easy way to fix this problem. By performing a forced shutdown or a forced restart, you can reset your iPhone without deleting your data or content.

Follow the steps below to force restart your iPhone, depending on your model: 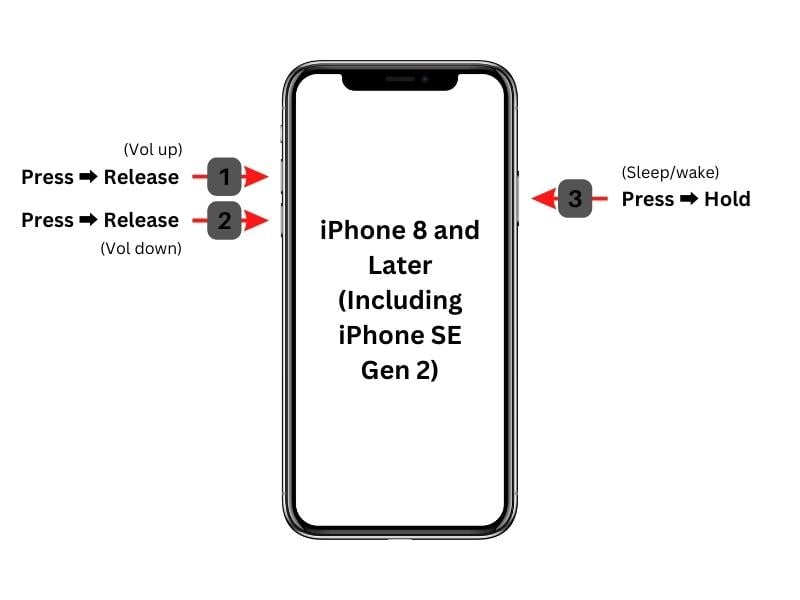 Force Restart iPhone 7 and iPhone 7 Plus

Press and hold the sleep/wake button and volume down button at the same time until the Apple logo appears on the screen. 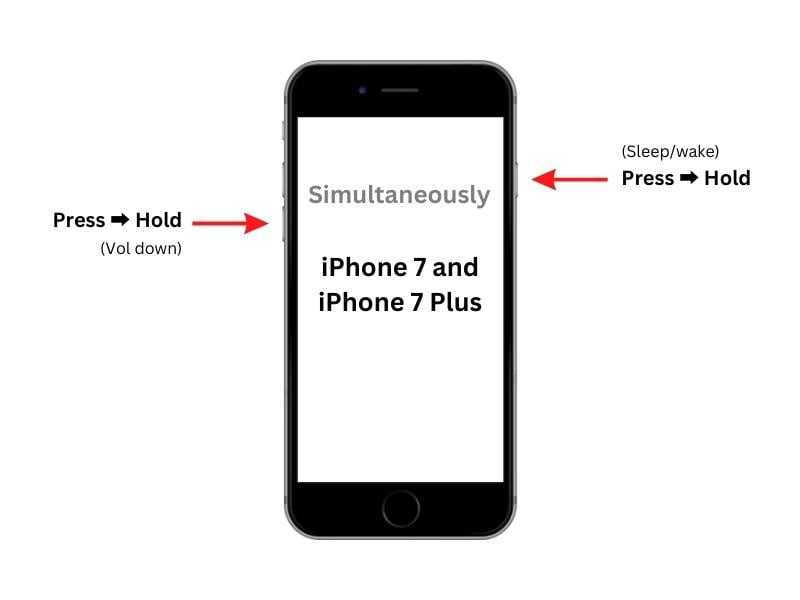 Press and hold the Sleep/Wake button and home button at the same time until the Apple logo appears on the screen. 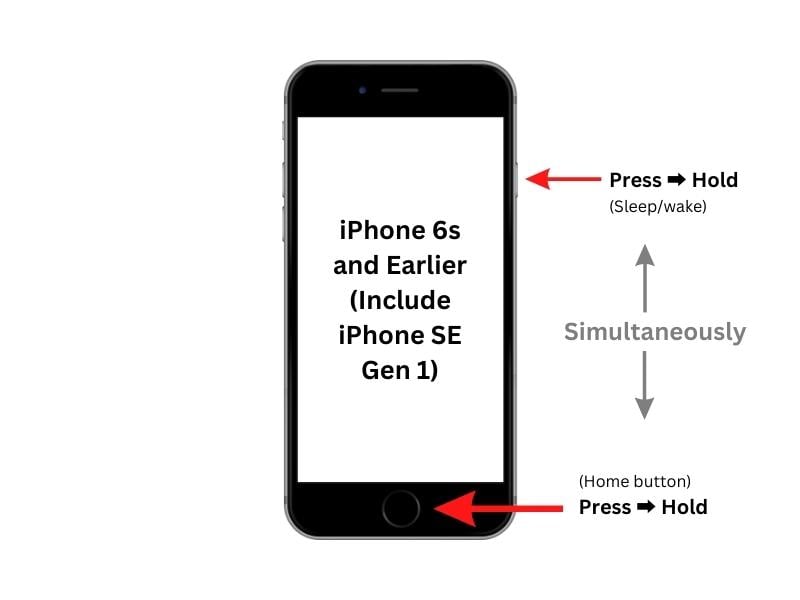 If you follow the above steps, you can restart your iPhone in case of a sudden freeze. After the forced restart, you should be able to use your device as usual.

Once you have restarted your iPhone, the next thing you should do is uninstall any apps you have recently downloaded that are causing the freeze. If you can not identify the freezing app, then you can restart your iPhone in safe mode. In safe mode, all third-party apps and services are disabled. So if the problem stops in safe mode, it means that one of the apps is the cause.

To do this, turn off your iPhone and then press and hold the Sleep/Wake button and the Volume Down button at the same time until you see the Apple logo. When the iPhone has booted up, you will see the Safe Mode message on the screen. Now you can proceed to uninstall any apps that seem to be causing problems. You can also restart your phone in normal mode to check if the problem is fixed. Once you identify and remove the culprit app, your iPhone should run smoothly without any freezing issues.

If the problem persists, you should contact Apple Support or visit an Apple Store for further assistance. Also, it is advisable to regularly backup your iPhone to iCloud or iTunes so that you can quickly restore it in case of data loss.

How to reset an iPhone?

One can reset an iPhone in a few different ways. The quickest way is to use the AssistiveTouch Menu and select the Restart option. If the iPhone is unresponsive, one can try using the Force Restart or Hard Reset options. To restart an iPhone, one can either do it via settings or by pressing certain buttons. A soft reset is a much easier process than a hard reset.

What are the differences between a force restart and a factory reset?

Why does my iPhone freeze when I use certain apps?

There are a few reasons why an iPhone may freeze when using certain apps. It could be because the app is not working properly or because it is running out of memory. The best way to fix this problem is to check for app updates or free up space on your device by deleting unwanted files or apps. If all else fails, a forced restart of your iPhone should help fix the problem.

How do you fix a frozen iPhone?

The best way to fix a frozen iPhone is to force restart it. To do this, press and hold the Sleep/Wake and Volume Down buttons until the Apple logo appears. However, if this doesn't fix the problem, you can try uninstalling the apps that might be causing the problem.

Why is my iPhone not responding to my touch?

If your iPhone is not responding to your touches, it could be due to a hardware or software problem. It is possible that your display has stopped responding due to a hardware issue, such as damage to the display from dropping the device or liquid damage. If this is the case, you should visit an Apple Store or contact Apple Support. There could also be a software problem, e.g., a faulty update or an error in the settings.

How do I force my iPhone to shut down?

If your iPhone stops responding and you can not turn it off manually, you can force it to turn off by holding down either the Sleep/Wake button or the Volume up button for at least 10 seconds until you see the power off slider on the screen. Then drag the slider to the right to turn off the device.

The iPhone stores your data and settings in the phone's non-volatile memory, which means that your data will not be affected by a forced reboot. However, it is recommended to back up your data regularly to avoid data loss.

How often should I force restart my iPhone?

It is recommended to force restart your iPhone at least once a week. This will allow you to reset any apps or services that may have become unresponsive and free up unnecessary memory usage. Force restarting your iPhone is an effective way to solve common problems and ensure that your device is running smoothly.

Are there any risks associated with performing a force restart?

In most cases, a force restart will not cause any damage to the device and can be a useful troubleshooting step when the iPhone is not responding. However, there is a small risk that data on the device could be lost if the force restart is performed improperly or if the device is already experiencing hardware or software issues.

How do I fix an unresponsive touch screen iPhone?

The user can fix an unresponsive touchscreen on the iPhone by pressing and quickly releasing the volume up button, the volume down button, and the side button at the same time. If this doesn't work, you can try restarting your phone by pressing and quickly releasing the Power button, then the Home button, and finally the Sleep/Wake button. If none of these solutions work, you may need to replace or repair your device.

Was this article helpful?
YesNo
TechPP is supported by our audience. We may earn affiliate commissions from buying links on this site.
Read Next
How to Install and Use Intel Unison App on Windows, Android and iOS
#apple #how to guide #iphone