It is another budget phone brawl

Around this time last year, Xiaomi launched the Redmi Note 4 in the market, and it pretty much ruled the mid segment for quite some time. Now the company has launched the successor of the Note 4, the Note 5, and unlike the Note 4 which stepped into the market and rocked the world, the Note 5 has got some serious competition to deal with. One of the competitors in the race is the Honor 9 Lite, the smartphone which looks a little too beautiful for its price tag, and also comes with some strong features. And of course, both are looking to carve a budget phone sized hole in your pocket. Which one is more likely to succeed? 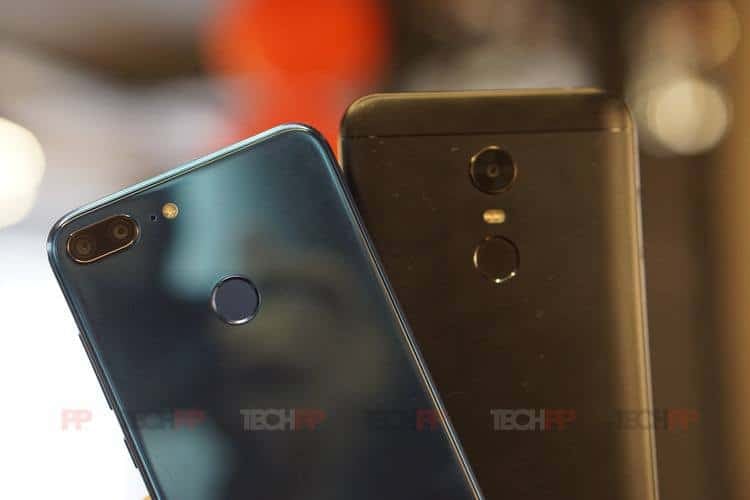 Looks: holding up a mirror (finish) to a normal Note!

This is really a one-sided battle. Put the two phones next to each other, and you will know why. While the Redmi Note 5 comes with a 5.99-inch full HD+ screen with 18:9 aspect ratio, there is nothing about the Note 5 which would make you want to look at it twice. Do not get us wrong, the Note 5 feels strong and sturdy with its metal back, but there is nothing exciting about its looks. It reminds us of all the midrange segment smartphones out there, especially the Note 4 (from the back). On the other hand, the Honor 9 Lite is like no mid segment smartphone that has existed before. Notwithstanding its price, it looks a lot like its high-end siblings, which is a good thing. The glossy blue glass back with a mirror finish and the 5.65-inch 18:9 aspect ratio display add up to make a very good looking phone. Yes, the back of the Honor 9 Lite is practically a fingerprint smudge magnet (our unit bears witness to it), but the sleek design, lightweight and premium look of the smartphone help it stand out from the crowd. Pretty one-sided. 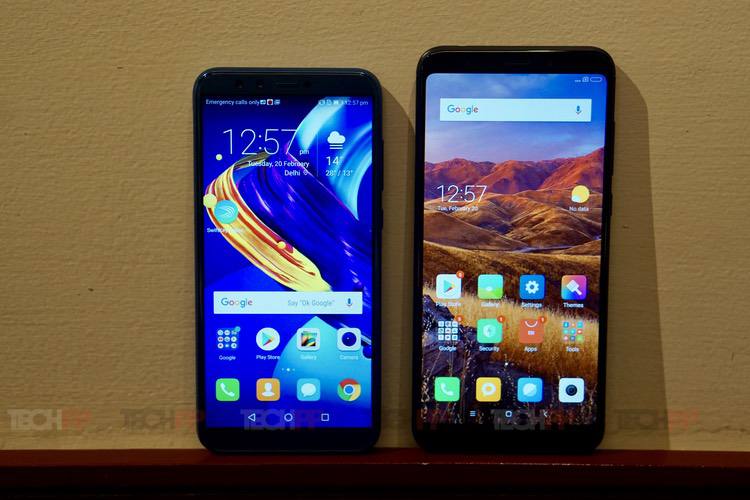 Hardware: You will not take cameras Lite-ly

The Note 5 comes with a bigger 5.99 (almost 6) inch full HD+ display with 18:9 aspect ratio while the 9 Lite comes with a 5.65-inch full HD+ display with 18:9 aspect ratio as well. The Note 5 also packs a bigger battery with 4,000 mAh under the hood and comes with an infrared port while the 9 Lite is powered by a 3,000 mAh battery and has no infrared connectivity, although it matches the Note 5 in having 4G, Bluetooth, GPS, and Wi-Fi. While this may look like a round going to the Note 5, the tables turn in the camera department. The Note 5 comes with a single 12-megapixel primary camera with dual LED flash and a 5-megapixel front-facing camera with LED flash, and the 9 Lite comes with not just double or triple cameras, but quad cameras – a dual primary and secondary camera combination, both of which come with 13-megapixel + 2-megapixel combinations. While the Note 5 comes with a slightly bigger display and battery, we think the quad cameras trump the dual cameras in this round.

Software: UI with EM and MI, Oreo and Nougat flavored

In the software department, both of our contenders run on Android with their own very distinct skins on top. And by distinct, we mean “very distinct” because Honor’s EMUI and Xiaomi’s MIUI are both laden with features but are very different from each other. The recently launched Redmi Note 5 runs on Android Nougat, with MIUI 9 on top of it, while the Honor 9 Lite which was released before the Note 5 comes with Android Oreo, with EMUI 8 on top. Both interfaces are rich and come with a number of options. No, stock Android fans will not love all the add ons but evidence suggests that many consumers love the choice. We think that the MIUI 9 is a better overlay than the much-improved EMUI 8 and also has a better record of updates, but we cannot ignore the fact that the 9 Lite runs on the latest version of Android. Which is why we are scoring this round to the 9 Lite.

Performance: All tied up, neck and neck 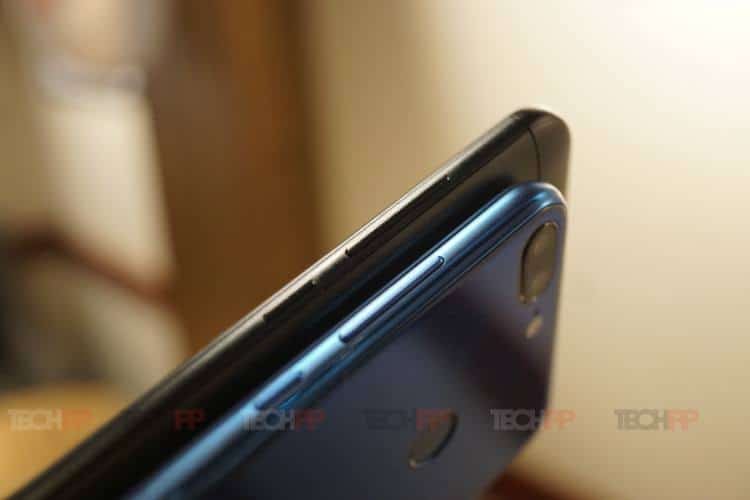 This round is as close as the looks, and design one was one-sided. And this is because the devices are so similarly specced, processors and cameras apart. Not surprisingly, the Note 5 and the 9 Lite are tied pretty tightly in terms of performance. Both the smartphones do well in the casual gaming segment and lag a bit in high-end gaming department. Both the devices heat a little when pushed, but the heating never reaches an alarming stage. That said, the Note 5 feels snappier than the Honor 9 Lite. The 9 Lite feels a like it is holding back and is not ready to jump and respond to your commands right away in the multitasking segment.

In multimedia too, it is neck and neck race. Both devices have displays with the same resolution (full HD+), but the Honor 9 Lite has more pixels packed in a smaller area, which makes its output seem a little richer in terms of colors. Matters do not get any simpler in case of sound. The Note 5 produces the louder sound, but the 9 Lite’s audio output seems marginally better in terms of quality, especially with headphones on. While we did not face any call drop issues on both the devices, call quality on the Honor 9 Lite seemed slightly better. No matter how you look at it, this is a round that is very close, with the competition being on the cutthroat level. Both devices have a few negatives but have largely remained on the right track. Which is why we are scoring this as a tie. 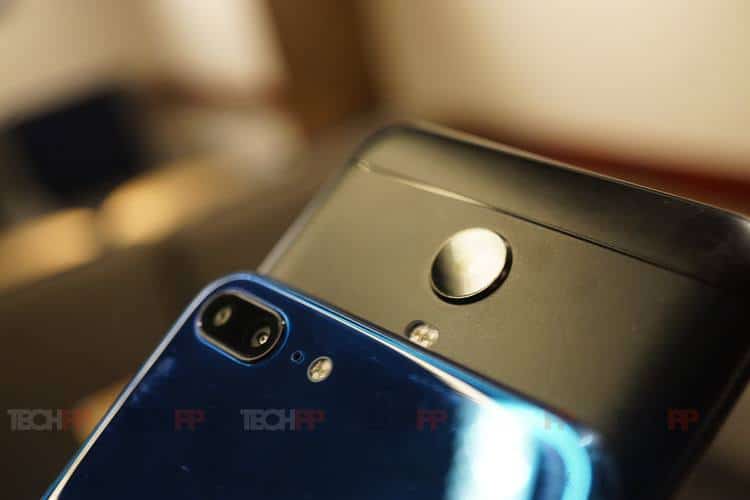 The camera is one department where the Honor 9 Lite has a clear edge over its rival, thanks to its quad cameras. The Honor 9 Lite comes with a dual camera on the back and dual camera on the front as well (13-megapixel and 2-megapixel in both cases) while the Note 5 only has a single camera in front (5-megapixel) and a single on the back (12-megapixel). And the two extra cameras on the Honor 9 Lite DO make a difference. The cameras of the Honor 9 Lite produces better color, with colors being more vibrant and poppy as compared to the Note 5. In terms of detail too, the 9 Lite performs slightly better than the Note 5. The difference is not really killer because the camera of the Note 5 itself is pretty good (and better than the one on the Note 4) but the Honor 9 Lite seems a step ahead of the Note 5. Adding to Honor 9 Lite’s advantage is deep bokeh, often with sharp edges, which comes courtesy those two 2.0-megapixel cameras on front and back, both of which collect depth of field information. You can also alter the strength of bokeh because the app allows you to play with the camera’s aperture, whereas all you get in the name of Bokeh on the Note 5 is the Tilt-Shift feature which is not really on par with what 9 Lite offers. Interestingly, the front camera on the 9 Lite captures slightly more detail more than the Note 5 but the Note 5’s front camera produces better colors, whereas the colors produced by the 9 Lite’s front camera are a little washed out. That said, the 9 Lite, offers features like Portrait mode on the front camera, which is again a plus. We are scoring this one for the 9 Lite. 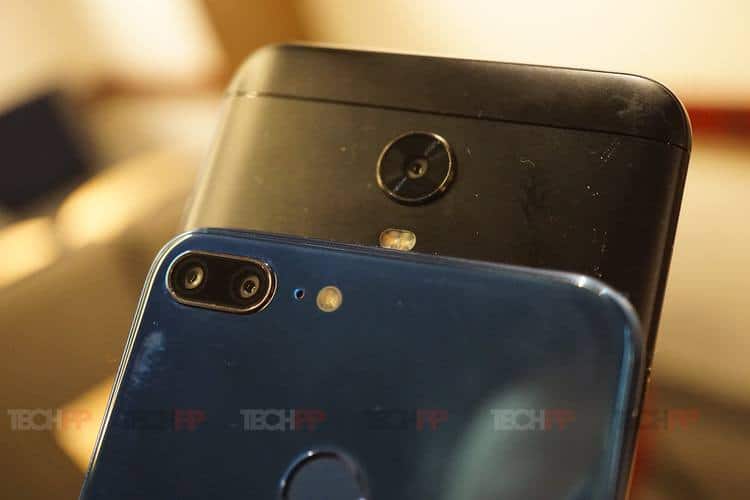 It might appear as if the Note 5 is fighting a lost battle, but the fight is not over yet. The Redmi Note 5 comes with a 4,000 mAh battery which can easily see a day and a half under heavy usage and can easily see two days when used moderately while the Honor 9 Lite can survive close to a day with 3,000 mAh battery that it carries under the hood. No, the Honor 9 Lite does not do badly in this round, but it simply is not in the same zone as the battery allied with the Snapdragon 625’s power management that the Redmi Note 5 sports! 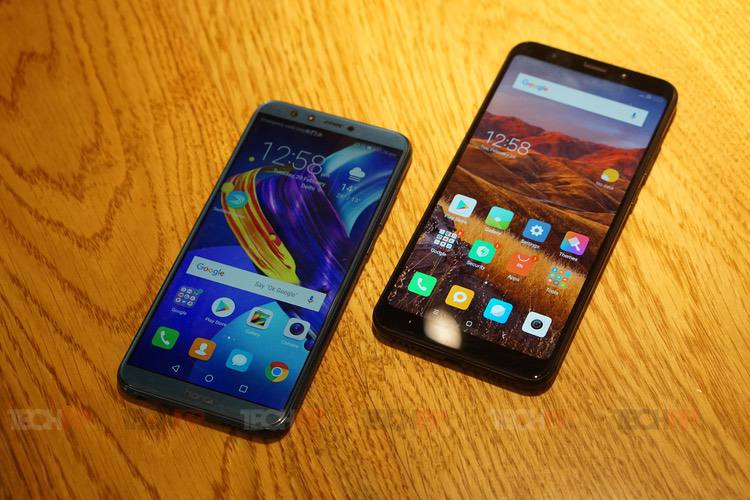 On paper, the fight might seem one-sided – the Honor 9 Lite has won four rounds out of six and of the two left one has been a tie, and the Note 5 has won the other. Which might lead many to think that the Honor 9 Lite has won the battle hands down. Not quite. For there is one thing that still needs to be factored in: the price. The 3 GB/ 32 GB model of the Note 5 is priced at Rs. 9,999 and its 4 GB/ 64 GB variant is priced at Rs. 11,999. On the other hand, the 3 GB/ 32 GB model of the Honor 9 Lite is priced at Rs. 10,999, while its 4 GB/ 64 GB variant is priced at Rs. 14,999. In essence, the base models are separated by only Rs. 1,000, the high-end variants of the smartphones have a massive Rs. 3,000 difference. So, if you are looking for a 4 GB/ 64 GB budget device, that offers a big screen, huge battery, decent cameras and performance, the Redmi Note 5 is your device. But if you are okay with 3 GB/ 32 GB specs (and the slight lags that come in, especially while multi-tasking), want a head-turning device with quad cameras that you can play around with, the Honor 9 Lite is the one you can go with. In fact, the higher priced version of the Honor 9 Lite even puts it in competition with the Redmi Note Pro (read our comparison of those two here)

All things remaining the same, it is the clash of style and substance – we think those wanting a solidly built device with great battery life and a regularly updated UI would prefer the Redmi Note 5, but those seeking a device to flash around with some serious camera muscle would incline steeply towards the Honor 9 Lite.