Microsoft’s SwiftKey 7.0 Gets new Toolbar with GIFs and Stickers

Swiftkey is one of the most popular third-party keyboards available for both Android and iOS. The company was acquired by Microsoft back in 2016. The SwiftKey 7.0 is the first major upgrade after the Microsoft acquisition. The upgrade comes with some exciting new features. The hub on the keyboard is now replaced with a new Toolbar that gives access to GIFs, location features, and calendar features. With this toolbar, one can use the GIF of their choice along with the stickers pack in a jiffy. 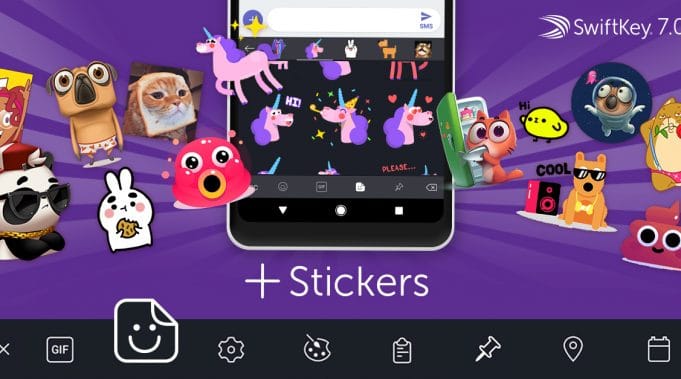 While the GIF feature is already added to the toolbar, the location and the calendar features will be arriving soon. The location sharing will initially be available in India and the US. SwiftKey users will be able to send the address of a nearby location in a message. The calendar feature will allow users to create appointments and reminders directly from their keyboard and insert the same on messaging platforms. On a related note, it is pretty evident that Microsoft wants to up its game and compete against the Google Gboard app across both iOS and Android.

Users can add stickers to while messaging and can also edit the same. One can also create their own stickers by using the templates and save it in Collections. Once done the stickers can be accessed in Collections by tapping on the ‘pin’ icon on the Toolbar. SwiftKey will be getting the Microsoft Sticker packet.

That apart, the SwiftKey 7.0 will be available in 8 new ‘Lish’ languages including Assamese, Bengali, Kannada, Malayalam, Marathi, Nepali, Odia and Telegu. Lish languages are referred to a hybrid of regional language along with English. This brings the total number of supported Indian languages to 40. SwiftKey is also said to have worked on its core features like the fast and easy typing, smart autocorrect, flow and next word prediction. With the new update in place, SwiftKey users will have access to stickers, GIF’s, Settings, Themes, and Clipboard.

[First cut] Samsung Galaxy A52: A Series Gets a New Look
Microsoft Windows 11: All the New and Highlighting Features
Apple Watch Gets ECG in India...and it works just fine!
Nokia 7.2 Review: Nokia finally gets Real, and says "Gimme…
Moto turns foldable phones on their head with Razr, and gets…
The Ultra gets spotlight, but the 11X and 11X Pro get "Crazy…