Dictionary apps are always convenient – whether you are accommodating to life in a new country, learning a new language for kicks, or simply wanting to check the meaning of a few words you didn’t understand in class, at work, or at a gathering with friends, it’s always useful to have a dictionary in hand.

But not all of us have the internet on their phones at all times, so having a couple of offline dictionary apps sounds even more like the perfect stuff to install. After scouting through the many dictionary apps available on the app stores, in English as well as in foreign languages, we decided to put them all in one place for you. So there you go – the best dictionary apps that can be used offline. 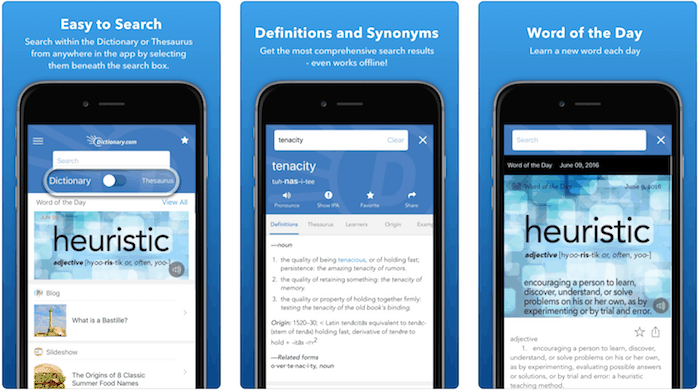 One obvious app which you can use anywhere in the world irrespective of the language is the Google Translate app. Of course, it’s one of the best offline translator apps but it can also be used as an offline dictionary app as well. We will talk about it further down the article. For now, let’s take a look at the top offline dictionary apps.

The Dictionary.com app for Android and iOS is perhaps the most exhaustive platform available in this list, at least for English. In addition to letting you browse offline, it comes with a wide variety of supplementary features like “Word of the Day”, quizzes, medical, science, rhyming, slang dictionaries, and more. There are audio pronunciations as well, and it houses over 2,000,000 definitions and synonyms.

On the first boot, it will prompt you to download all the necessary offline files, so you can take advantage of it without connecting to the internet. You can have access to definitions in English and reference words you researched in the past, by accessing the archive. The app even tells you the backstory of a particular word. Pronunciation, though, are available only online. It’s free, and you can download it from the links down below for Android and iPhone. 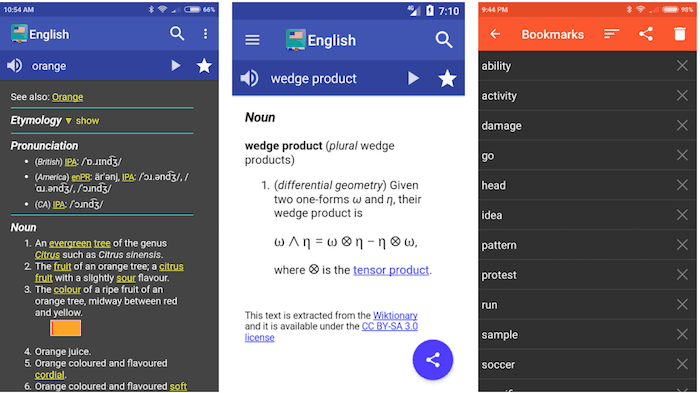 If you find Dictionary.com a tad too intimidating and want merely an offline dictionary app, this is the app for you. Appropriately called “English Dictionary – Offline”, this app has a much simpler interface and functions offline right out the box. That, however, doesn’t mean it lacks the more advanced features.

“English Dictionary – Offline” is capable of syncing your data such as bookmarks, notes, across devices. In addition to that, there’s an OCR tool that you can employ for simplifying scanning the word through the camera instead of typing. It can also offer a random word for you to learn every day and more. “English Dictionary – Offline” is free and available for Android only. 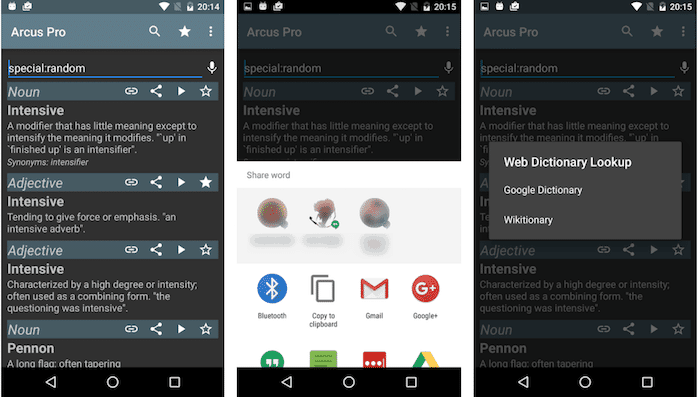 The Arcus offline Dictionary app is available for free on Google Play and suits all Android devices, be them phones or tablets. Having an offline database that includes more than 165000 words, as well as definitions and synonyms for those, the app can be easily used wherever you are located.

There is only a need for an internet connection at the beginning so that you can download the 6.2 MB application on the device. Once you are done, you can start taking advantage of the definitions, favorite features, sharing, hyperlinking, and customization options. 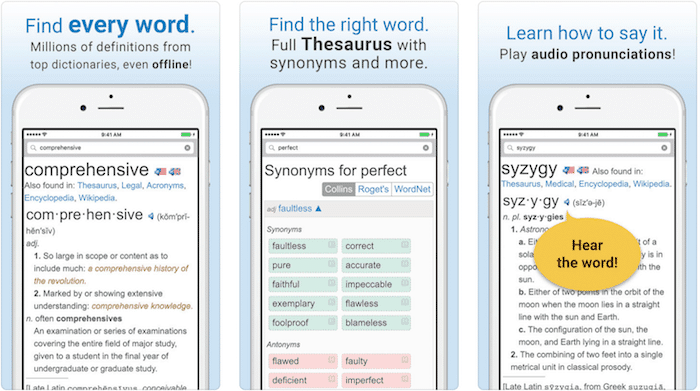 Lastly, for English, we have the offline dictionary app by TheFreeDictionary.com. This one is similar to Dictionary.com and has a myriad of features in addition to offline access. The app comes with daily content alerts like “Word of the day” and has various other field dictionaries too like medical, legal, financial, and more. It’s available for free for both iOS and Android. 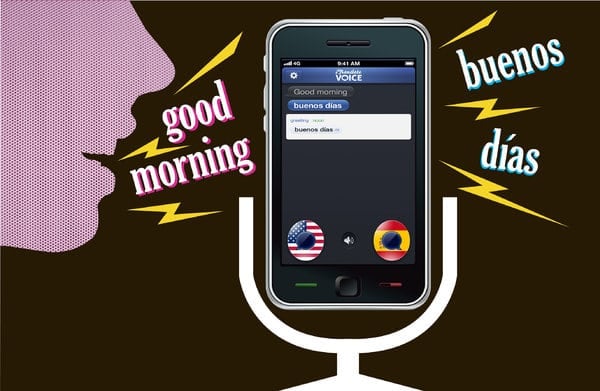 As you’d guess, this app lets you look up meanings for English and Hindi words in both languages without an internet connection. The app can even read the words out loud and comes with learning games like crossword, scrabble, and more. There’s even a user community where you can post specific questions regarding words or sentences. It’s free but only available for Android right now. 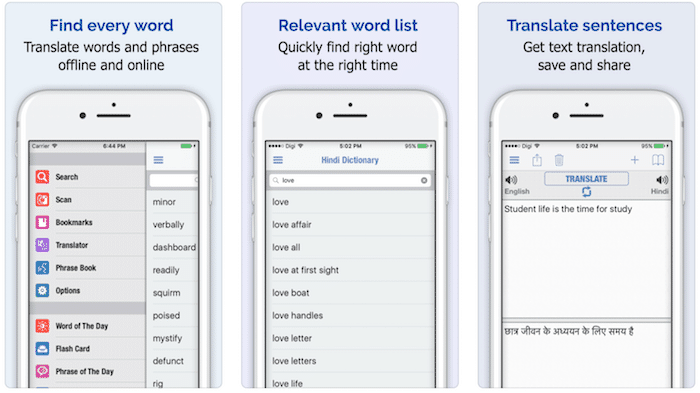 The aforementioned Hindi and English app’s closest iOS counterpart is a free app called “Hindi Dictionary+”. The app comes with all the features you would need like translation, offline access, and even games for improving your vocabulary. There’s also a phrasebook that can help you speak common phrases. It’s free and can be downloaded from the link down below.

This app is developed by the same behind “English Dictionary – Offline”, and therefore, it has the exact set of features except for one bit — the language. “French Dictionary – Offline”, as the name suggests, is for people in search of an offline French dictionary. There are more than 250000 French definitions, and like its English counterpart, it works offline right out the box. It’s free, and you can download it from the link below. 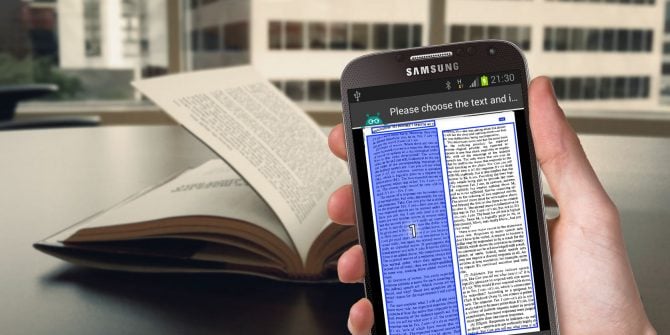 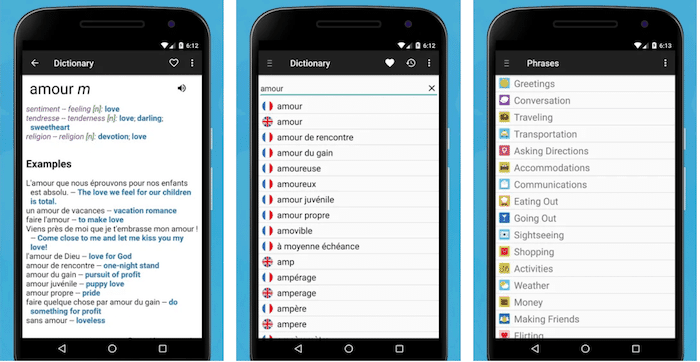 This app is for people who are looking for both French and English dictionaries in a single place for translation and learning purposes. In addition to having over 734,000 offline entries (over 492,000 for free.), the app also has flashcards if you’re just getting started with either language. There’s also a phrasebook for learning casual, everyday sentences like for transportation or eating out. It’s free for the most part and available for both iOS and Android. 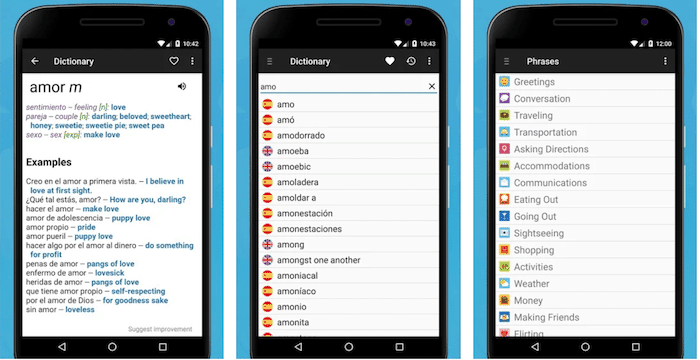 “Spanish English Dictionary” is a straightforward English to Spanish or vice-versa dictionary which can function offline as well. Developed by the same team which designed the last app we discussed, this one also features a phrasebook and flashcards if you’re still in the learning phases. It’s only available for Android, however. You can download it for free from the link down below. 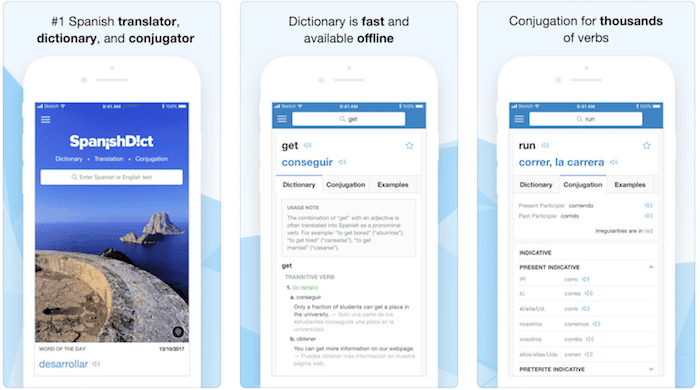 If you’re on iOS, however, download an app called “SpanishDict Translator”. It works similarly and has roughly the same set of features that is suitable for both amateurs and professionals. It’s free, and you can download it from the link down below.

What is the best offline dictionary app for German?

German English Dictionary by Ascendo inc is by far the best German to English dictionary. It is also the best offline dictionary for the German language on Android phones and tablets. The same is available for iPhone and iPad as well under the name German Dictionary Translator +

What is the best French dictionary app which works offline as well?

French Dictionary – Offline is the most highly rated French to English dictionary on the Google Play Store. It has over 295000 french definitions, a large number of inflected forms, and conjugation of verbs. It works flawlessly offline and frequently updates the database whenever it finds the Internet. The other option is Dict.cc which works for multiple languages. iOS users can look at Offline English French Dictionary (Dictionnaire).

Which is the best offline dictionary app?

Let’s assume you are a frequent traveler and like to explore a new country every other week. Well, it’s natural to wonder what’s the best offline dictionary app irrespective of the language. One app to rule them all. Check out Dict Box – Universal Offline Dictionary which has support for over 50 languages. Mind you, the size of the app can get quite huge if you download all the language databases. So tread carefully. The other option is Dictionary Linguee which is also available on iPhones and iPads.

Was this article helpful?
YesNo
TechPP is supported by our audience. We may earn affiliate commissions from buying links on this site.
Read Next
10 Best Free Cloud Storage Services for Backups and File Storing
#apps #Best Apps #Dictionary