A few years ago (say in 2013), this comparison would appear ridiculous. On the one hand, you have a device that costs Rs 25,999 and on the other, one which costs Rs 14,999. Logic would dictate that they would attract different customers. But times have so changed. We live in an era where specs and performance are not always defined by a device’s price point – hey, a Rs 32,999 phone is compared with one that costs almost Rs 90,000 these days. So it is hardly surprising that people are comparing the Nokia 7 Plus with the Xiaomi Redmi Note 5 Pro. 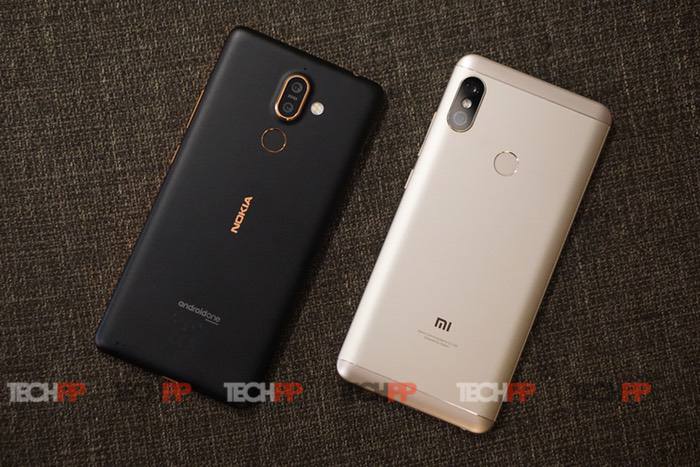 In many ways, it is a clash of two cultures as much as two devices – on the one hand, you have the former leader of the Indian smartphone market, Nokia, which is making a comeback to the mobile phone world, and is relying on its (perceived) core virtues of solidly built devices that go on and on; and on the other you have Xiaomi, the new number one in the Indian smartphone arena, which has consistently grabbed market share by offering well-specced devices at surprisingly affordable prices. And although the gulf in price between the 7 Plus and the Note 5 Pro might seem large, the difference in their spec sheets is actually not THAT wide. Cue the comparisons.

So well, which of the two should you be going for, if you are looking for a good mid-segment device? Let’s try to work that out. 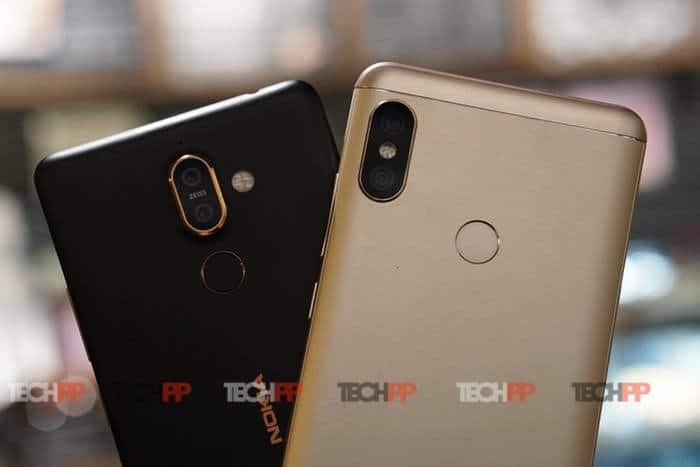 This is perhaps the most clear-cut of all rounds. While the Redmi Note 5 Pro has a design that is functional, the Nokia 7 Plus is clearly an eye-catcher, with its copper accented sides as well as fingerprint scanner and dual camera unit. Both devices are almost the same size and weight – the Nokia 7 Plus is 158.4 x 75.6 x 8 mm and 183 grams, while the Redmi Note 5 Pro is 158.6 x 75.4 x 8.05 mm and weighs 181 grams. Both have displays of almost the same size – the 7 Plus has a 6.0-inch display, while the Note 5 Pro has a 5.99-inch one, and both have the 18:9 aspect ratio that is getting very popular these days. But there the similarity ends – the 7 Plus with its ceramic feel paint finished back and copper highlights is a definite looker while the Redmi Note 5 Pro is more of a plain Jane with its metal back with plastic top and base sections, not to mention a jutting out dual camera capsule. 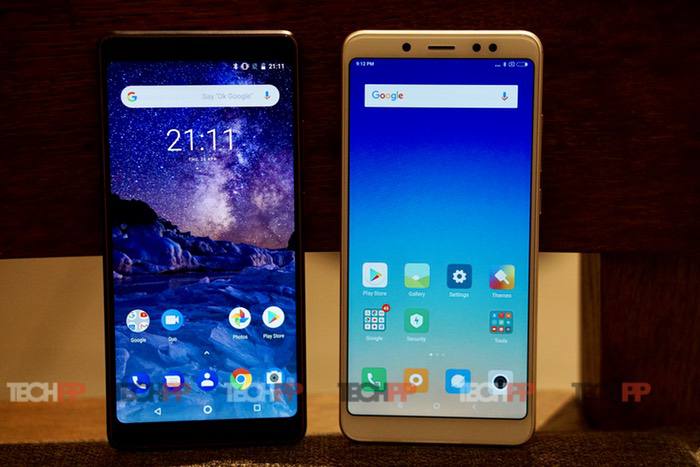 And this is where the close battles commence. For both devices come with the latest avatars of mid-segment Qualcomm processors – the Redmi Note 5 Pro is powered by the Qualcomm Snapdragon 636 chip and comes with 4 GB RAM and 64 GB storage, while the Nokia 7 Plus runs on the Qualcomm Snapdragon 660 and has the same RAM/storage combination (the Note 5 Pro has a 6 GB RAM variant too, though, but we have the 4 GB / 64 GB variant). Now, on paper, the 660 is supposed to be slightly faster than the 636, but the difference by all accounts is not a staggering one. In terms of other hardware, both the displays are full HD+ ones, and are reasonably bright (the Nokia 7 Plus might be marginally brighter but we were not sure). The Nokia 7 Plus comes with a 13 and 12-megapixel camera combination on the rear with Zeiss optics, which on paper seems to be better than the 12 and 5-megapixel cameras on the rear of the Redmi Note 5 Pro. On the front, the 7 Plus sports a 16.0-megapixel snapper, which is numerically trumped by the 20.0-megapixel one on the Redmi Note 5 Pro. Both devices come with 4G, Bluetooth, Wi-Fi and GPS, but the 7 Plus has NFC and a USB Type C port up its sleeve, while the Note 5 Pro scores with Infrared. On the battery front, the Note 5 Pro edges out the 7 Plus, with a slightly bigger battery – 4000 mAh against 3800 mAh. We are scoring this one to the Nokia 7 Plus, mainly for that processor, and a higher megapixel count on the cameras, but as you can see, this is getting close.

Software and UI: To stock up on pure Android or to skin it?

This is the skin vs stock debate all over again. On paper, this would seem to be a one-sided battle, with the 7 Plus running stock Android and already updated to 8.1 with assured updates for two years, thanks to being part of the Android One initiative, as compared to MIUI 9 running on Android 7.1 on the Note 5 Pro. But wait a minute, Xiaomi’s interface on the Note 5 Pro does have a few aces up its sleeve, apart from the usual utilities (Mi File Manager, Mi Drop, Recorder, Screen Recorder and so on) and shortcuts, it now also has Face Unlock (something which is expected soon on the 7 Plus but is not there at the time of writing) and also a totally gesture-based UI which ditches the on-screen navigation buttons. The newer version of Android and Nokia’s excellent track record win this one for the 7 Plus again, but we can see a lot of people getting swayed by the Face Unlock option, which is a sort of rage right now. 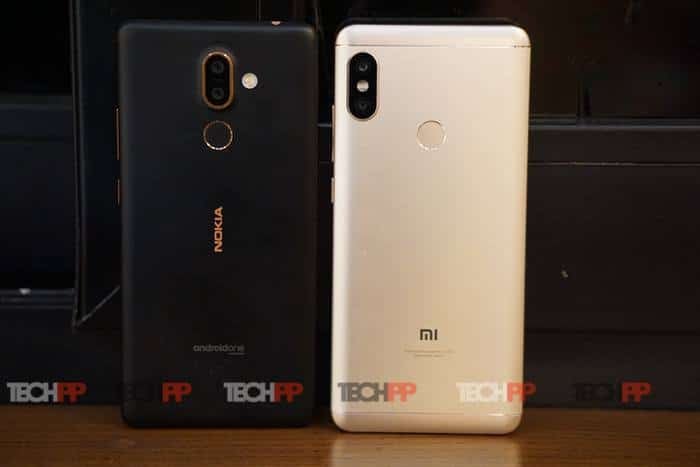 On paper, this should again have been a cakewalk. Nokia’s 13 and 12-megapixel dual cameras come with Zeiss optics with the main 12.0-megapixel snapper having a larger f/1.75 aperture and the 13.0-megapixel shooter chipping in with 2X optical zoom. The Redmi Note 5 Pro, on the other hand, has a 12.0-megapixel sensor with f/2.2 aperture and a 5.0-megapixel shooter for picking up depth information. Seems like a no-contest? Actually, it gets fascinatingly close. Xiaomi has referred to the Redmi Note 5 Pro as its camera beast and although it was initially inconsistent, a number of software updates have polished its performance to the extent that it more often than not matched the Nokia 7 Plus. The 7 Plus did better in low light but in normal light conditions, found itself being run close by the Redmi Note 5 Pro. And when it came to Portrait/Bokeh mode, the Note 5 Pro actually outgunned the 7 Plus, handling edges much better. In the selfie department, the Note 5 PRO’s 20.0-megapixel shooter seemed better than the 16.0-megapixel one on the 7 Plus. The low light performance and optical zoom clinch it for the 7 Plus again, but the difference is once again a very small one. 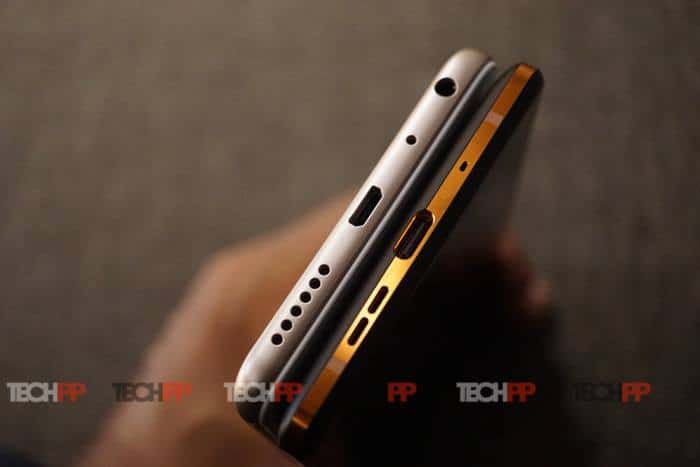 We are tired of saying it but once again on paper, the Nokia 7 Plus should have won this round thanks to its slightly faster processor. In real life situations, however, the difference between the two phones was not visible. Both handled casual games and multiple apps with ease. Get into the high-end gaming zone and you might – might – notice games moving marginally better on the 7 Plus, but the difference was not noticeable to everyone every time. The sound quality, however, seemed marginally better on both loudspeakers and headphones on the 7 Plus, which also comes with three microphones and Ozo support for audio recording. Both devices handled routine tasks like email, social networking and Web browsing equally well. The audio performance wins this one for the 7 Plus. Else this is pretty even.

When it comes to carrying out routine tasks, the difference between the two devices is pretty minimal. As we pointed out before, they are equally matched when it comes to playing games and multi-tasking between different apps. The difference is very small in routine tasks as well – we think the Nokia 7 Plus edges it out on call quality, though. It is a slight difference, though. Close call once more, as is becoming increasingly the case in this battle. 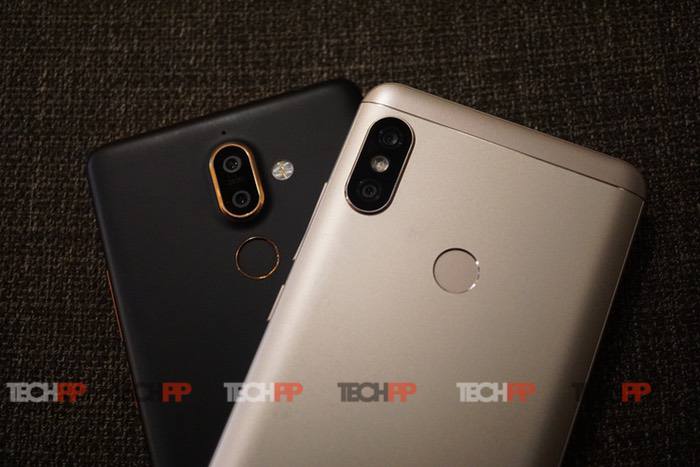 After losing six rounds, albeit five of them very narrowly, the Note 5 Pro opens its scoring by outpointing the Nokia 7 Plus in terms of battery life. Mind you, it is YET again a close finish – both phones will deliver two days of battery life on normal usage. But the Redmi Note 5 Pro’s 4000 mAh battery just lasted a few hours longer than the 3800 mAh one on the 7 Plus. It is a close call and the difference is not a deal-breaking one, but this round goes to the Xiaomi device.

And do we have a winner? Or two?

So which one should you be going for? On paper, the answer seems simple enough – the Nokia 7 Plus wins six out of the eight parameters on which we compared the devices. But factor in the fact that the Redmi Note 5 Pro runs it close while costing a whole lot lesser, and one’s whole perspective switches. Yes, if money is not an issue, we would ask you to pick the Nokia 7 Plus for the better design and a potentially faster processor, but you get an idea of just how tight things are when we confess that we could not find any other crystal clear parameter in favor of the 7 Plus. As we said in our review, it is a very good phone, but not a great one. The 5 Pro, on the other hand, has its share of sins – there have been audio issues and the design is frankly middling – but it runs the Nokia 7 Plus shockingly close in many of the parameters, and costs significantly lesser.

Was this article helpful?
YesNo
TechPP is supported by our audience. We may earn affiliate commissions from buying links on this site.
Read Next
Snapdragon 782G vs Snapdragon 778G Plus: What Has Changed?
#comparison #Face Off #nokia #Nokia 7 Plus #Redmi Note 5 Pro #xiaomi