The mess that is Android fragmentation – in one photograph

This was not an article that has planned. It actually started out as a story that compared the virtues of three phones – the Poco F1, the Google Pixel 3 XL and the OnePlus 6T. However, there was a stage when we were comparing the versions of Android running on the three devices, and suddenly, Android fragmentation was staring us at the face. To spice matters up, we added the newly updated Nokia 6.1 Plus to the mix, and bingo, more confusion. 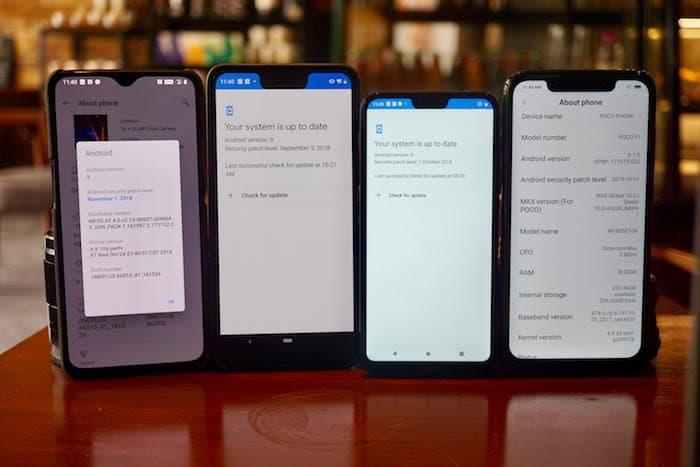 The photograph tells the story. But just in case you do not want to strain your eyes, here’s the grand summary:

No, we are not going to say that this is a perfect statistical representation of all Android devices in the market out there. Far from it. But it does show a mix that is roughly representational – there is a device with a comprehensive UI skin (Poco F1), a device with a minimalistic UI (OnePlus 6T), a device that is part of the Android One initiative (Nokia 6.1 Plus), and a device that is Google’s own Android flagship (Pixel 3 XL). There are two stock Android devices, one that is near stock Android and one that has got a totally different UI but has Android at its core. All of them come from different brands. And all of them have been relatively recently released – over the past three months.

Well, while they do not represent all Android devices, they do reflect the chaos that is rapidly becoming the Android ecosystem. For, if you had asked us which of these four would have the most recent version of Android and the latest security patch, we would have wagered on the Pixel 3 XL, which is Google’s own device, followed perhaps by the Nokia 6.1 Plus, which comes from Nokia, easily the most regular and frequent OS updater in the Android One initiative.

We would have so lost our money. For, the device of the four bearing the latest Android and Security Patch is actually the OnePlus 6T, which runs Android Pie and has the 1 November Security Patch. And do not sneer at the Poco F1 yet – it might have an older version of Android (8.1) but has the Security Patch of 1 October, which puts it on par in the latter department with the Nokia 6.1 Plus, and surprise, surprise, ahead of the mighty Pixel 3 XL, which is still on the 5 September Security Patch.

To say that this is a chaotic state of affairs is an understatement. Not least because of the four devices that we looked at, getting speedy and timely updates were among the USPs of two – the Pixel 3 XL and the Nokia 6.1 Plus. The fact that the Pixel, of all devices, was running the oldest Security Patch of the group was frankly a surprise to us. And this is something we discovered quite accidentally – if we really dig deep, we are sure we will get even more varied combinations of OS and security patch versions.

What is a trifle troubling is that all this is happening after all the hype around the revived Android One campaign, the fact that there are more stock Android devices in the market than ever before and of course, all that talk of Project Treble. For all its talk of getting on the same table, Android remains a fragmented house.

(Note: Yes, we did observe the pinkish tint on the displays of two the devices. That is another story for another day).

Mi A3 Review: Android One Step Forward, Mi One Step Back
Motorola One Zoom with Quad-camera setup and Android One…
Audials One 2021: a one-stop solution for all your media…
Xiaomi Mi A3 vs Realme 5: Android One champ takes on a…
Motorola One Hyper with 32MP Pop-Up Camera and Android 10…
Paytm launches All-in-One Android POS for SMEs and Merchant…