There are two ways in which you can take on a well-entrenched player in a market. You can opt to imitate or improve what the player is already doing. Or you can try to change the playing field. Samsung tried the former approach when it took on Xiaomi’s Redmi series with the Galaxy M20. Oppo seems to be trying the latter strategy with the first device in its new series, the K1. 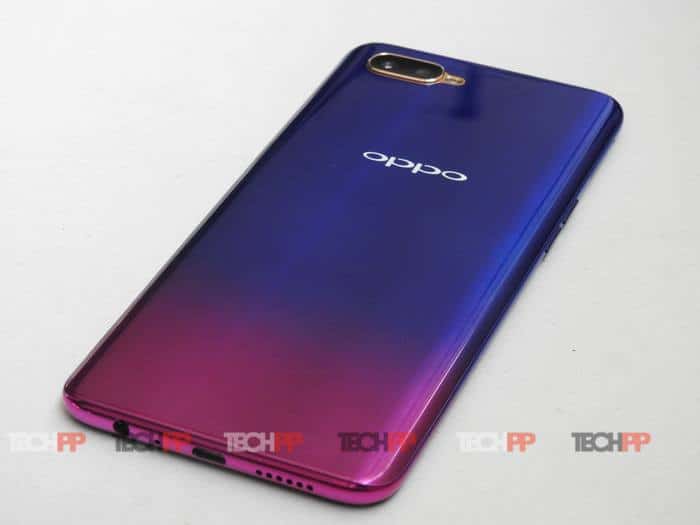 For, let’s get one thing straight, the Oppo K1 does not come into the “do things better” category and does not even try to fight on price. At Rs 16,990, there are some who would think that it is actually losing the price battle to the likes of the Galaxy M20, the Asus Zenfone Max Pro M2 and of course, the Redmi Note 6 Pro (yes, comparisons are underway). The fact, however, is that the K1 brings a number of new beats to the mid-segment smartphone party.

We have spoken of the design and hardware of the K1 in our first cut of the device. To reiterate, the “look” of the phone is going to be extremely divisive. We have had people absolutely loving the gradient finish with dark blue merging into purple and light patterns playing off that carbonate back, making it feel almost like glass. And we have had people saying that it was a little too loud for comfort and even reminded them of a Cadbury’s Silk chocolate wrapper. No matter how you look at it, there are no two ways about it – the Oppo K1 WILL be noticed. The K1 is cleanly designed and looks rather compact in spite of a rather large 6.41 inch AMOLED – yes, AMOLED at this price – display. That display, incidentally, sports a drop notch, something that is a rarity in this price range. It also contains an even bigger rarity – an in-display fingerprint scanner (no, there’s none on the back, which makes it even more distinct). No, it is not a phone that can be easily used with one hand, but it feels reassuringly solid to hold and its curved edges make it comfortable to use. We can see some of the “glass” and “metal” brigade screaming murder at the use of carbonate (plastic) on the back, but apart from its regrettable penchant to pick up smudges and scratches, we found no reason to complain about it in design terms. 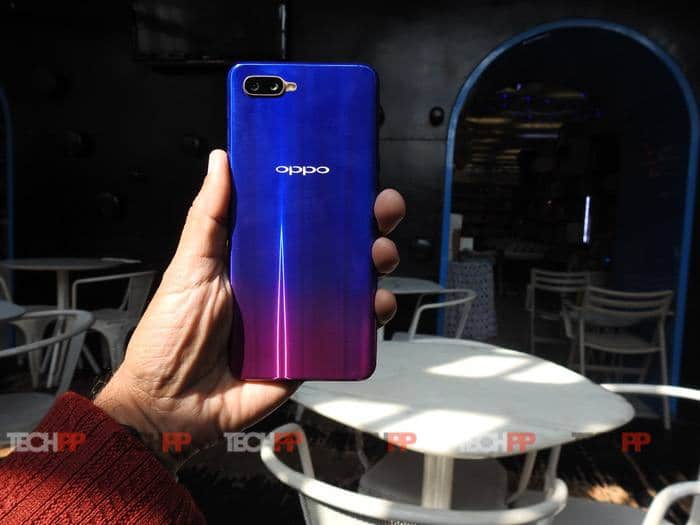 And that absence of complaint extends to the entire phone as a rule. The Oppo K1 comes with a very respectable spec sheet – it is powered by a Qualcomm Snapdragon 660 processor, which is a proven performer in the mid-segment, and is allied with 4 GB of RAM and 64 GB of storage, which is expandable using a micro SD card (which has a dedicated slot of its own, hooray). The display is one of the best we have seen at this price point, aside from a slight tendency to oversaturate colors. Watching videos and reading text on it are an absolute joy and while we would have preferred it to be slightly brighter, it punches well above its weight in this price segment. The processor and RAM combine to deliver a very good experience in general terms as well. No, do not go in with expectations of playing the likes of PUBG at maxed out settings, but as long as your gaming ambitions are in the limits of the Asphalt and endless runner series, you are going to get an experience with hardly any age in it. The phone claims to come with a special Hyper Boost feature that enables titles like PUBG to run more smoothly but truth be told, we could really tell that much of a difference from playing the game in normal mode. That display does make a difference, although the sound is not the greatest (why are stereo speakers not popular at this price point, we wonder?). Running multiple apps also did not really tax the phone, and we never faced any major lags or any heating issues. The K1 is one cool customer, and that chip, in spite of being a little on the older side, does deliver a higher level of performance than we have seen on most other devices in the Rs 15,000 category.

To AI or not to AI…the question of cameras 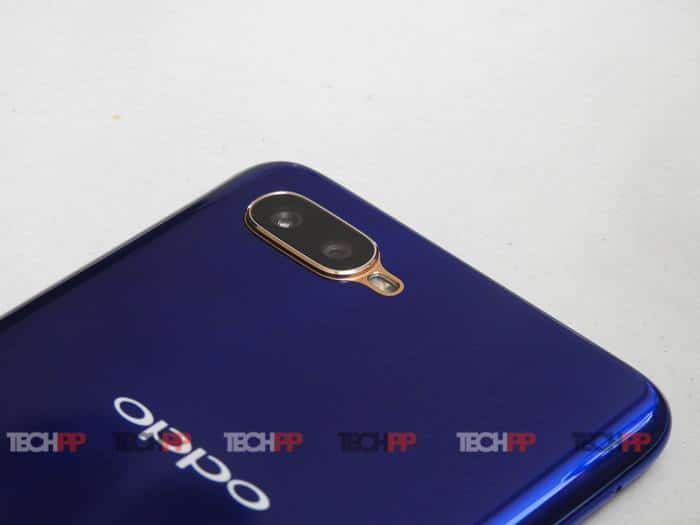 The cameras are, however, where things get tricky. Oppo has, in best Oppo tradition, highlighted the selfie camera on the device – a 25 megapixel affair with f/2.0 aperture – stressing that it comes with some AI and a special beauty algorithm that captures 296 points on your face, analyses information and then generates the best possible shot based on some eight million beauty solutions. That sounds very impressive, and the camera does deliver some very good selfies, but we would recommend turning off the beauty and AI modes, simply because as in the past, we think they ended up making us look totally unreally smooth and immaculate. Turn down (or off) the beauty options, however, and you will generally get good colors and detail, though again, there is a slight hint at oversaturation. We did miss a portrait mode option, though. Honestly, without the hype of AI, this is a very good selfie camera. The hype tends to drive expectations up unrealistically.

(Note: Click here for additional images and full resolution version of below images) 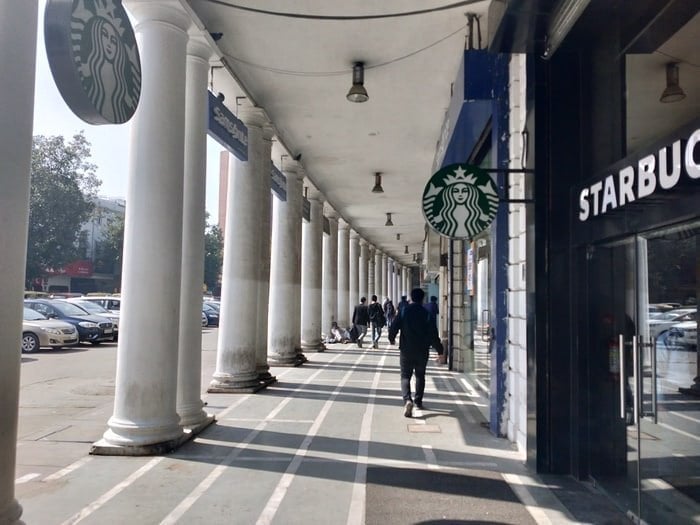 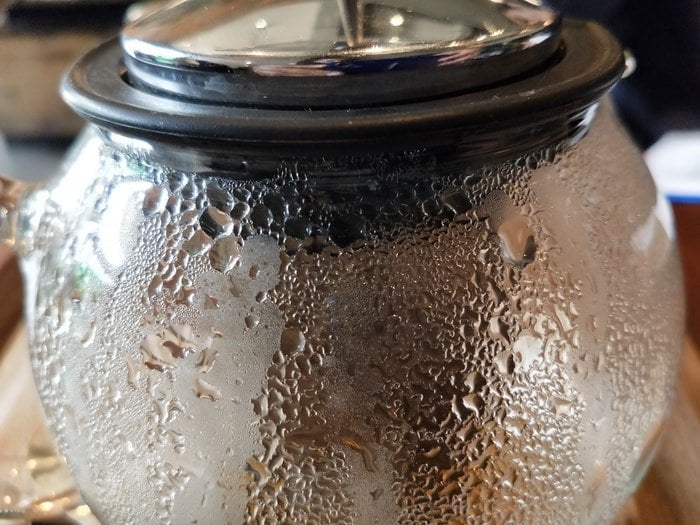 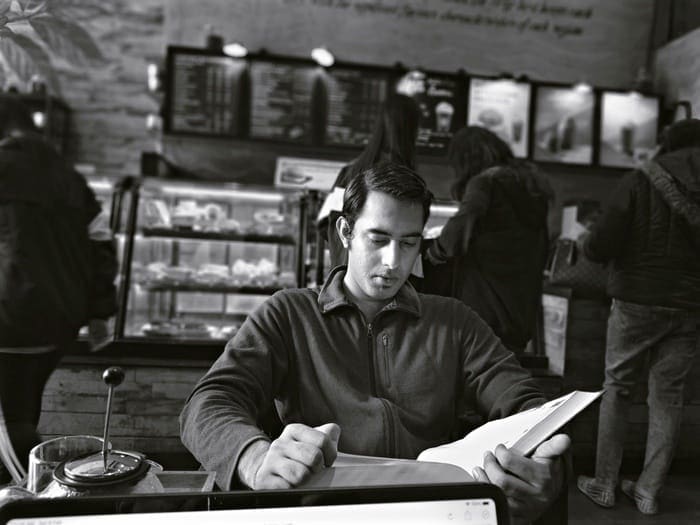 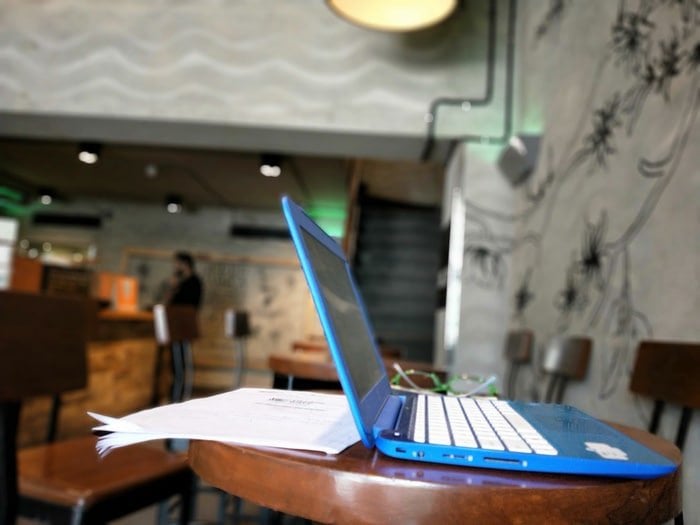 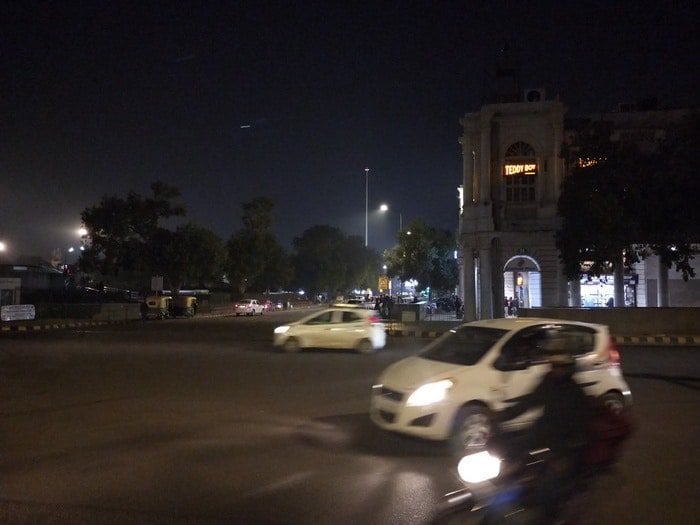 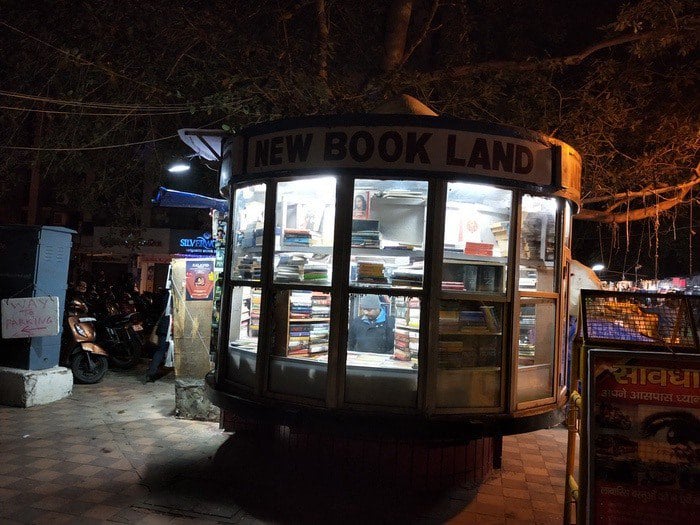 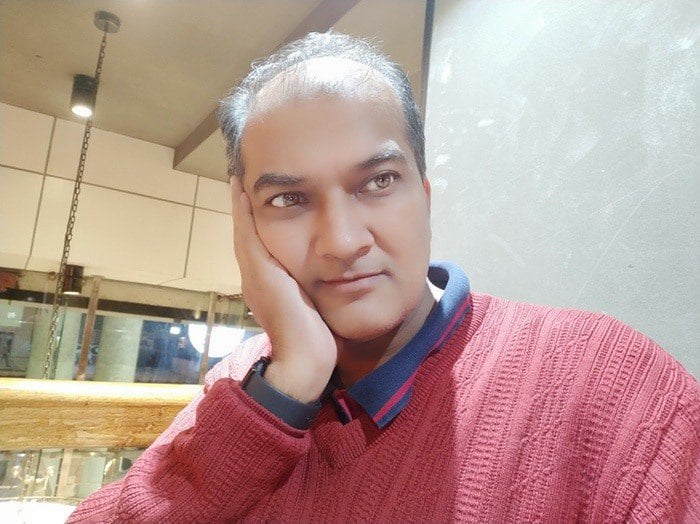 The rear camera is a slightly mixed bag. The 16-megapixel main sensor (f/1.75 aperture) in combination with a 2.0-megapixel secondary sensor is capable of utter brilliance on one hand and sheer mediocrity on the other, AI presence notwithstanding. There were occasions when we were surprised at the level of detail that the camera captured and on others, we felt more than a little let down. The slightly larger than usual aperture results in reasonable low light performance at this price point – details are not the greatest but colors were often well captured. Portrait mode is a little hit and miss, as it often is at this price point, but as long as your subject is close enough, you will end up getting a good shot, and the presence of special lighting effects (studio lighting) is a huge bonus. Video quality is par for the course too, with the presence of 4K being a nice touch. No, we do not think that the rear cameras will give something like the Redmi Note 6 Pro or the Realme 2 Pro sleepless nights, leave alone the Mi A2, but they are par for the course. Do not expect crazy great results here every time, but do be ready to be surprised from time to time. 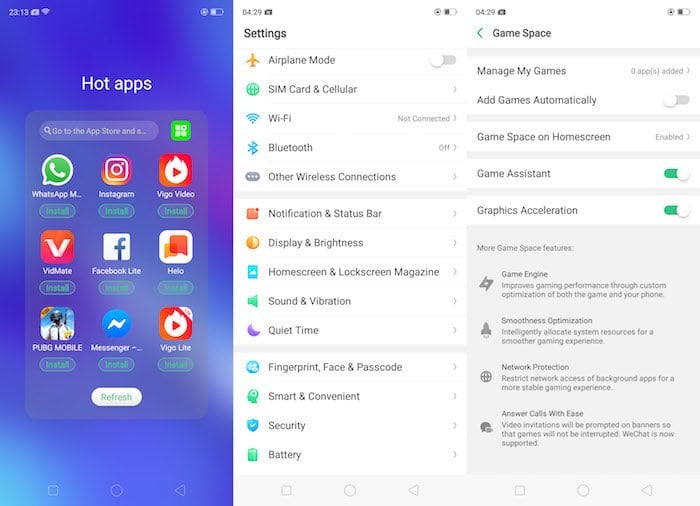 One of the much-touted features of the K1 is the in-display fingerprint scanner. Like most of its counterparts, it is not as fast as the rear fingerprint scanner but unlike some of the competition, is not slow and is also consistent enough. And of course, there is face unlock, which Oppo has ensured is more comprehensive than the very basic one offered on many stock Android devices, and can be used to unlock specific apps too. We found using it was swifter than using the fingerprint scanner, and Oppo has also added a mode that will make sure that the phone will not be unlocked if your eyes or closed – incidentally, we have no idea why that is not enabled by default. After all, who would want to have their phone unlocked by their face when they are sleeping?

Which brings us to the one matter that is a bit of a constant refrain when it comes to devices from Oppo – the software. It is rather ironic that a phone boasting such cutting edge features as an in-display fingerprint scanner and water drop notch is actually running on an older version of Android, 8.1 to be precise. Then there is the matter of Oppo’s Color OS which runs on top of Android. We have always belonged to the camp that has stressed that there is nothing wrong with UIs that add value to the user experience – stock Android remains a purist geek thing – but Oppo’s UI has us divided. Yes, the interface itself is a lot less cluttered and cleaner than in the past. But it does have its eccentricities – long pressing the power button actually invokes Google Assistant by default and if you keep the button pressed after that, a red button appears on the screen giving you the option to shut down the phone. Pressing it however does nothing – you have to swipe it down to shut your phone down. Yes, you do get used to it but we still think it is rather counterintuitive, something that is especially evident if you go to Settings, which are a little clustered. It is a bit of a mixed bag and we think most users (especially first-time smartphone users not accustomed to any other UI) will get the hang of it in due course, but it trails MIUI and EMUI in terms of smoothness and being user-friendly.

The K1 packs a 3600 mAh battery, which is smaller than what we have seen on the likes of the Redmi Note 6 Pro, the Samsung Galaxy M20 and the Asus Zenfone Max Pro M2, but it is good enough to see off a day of normal to heavy usage. There is no fast charge support (the phone has a micro-USB port) and the phone takes about two and a half hours to charge fully. Call quality is a bit middling – you will not get the sort of clarity that a Moto, Nokia or Honor device deliver – but is nowhere near a deal breaker.

A good start for a promising series 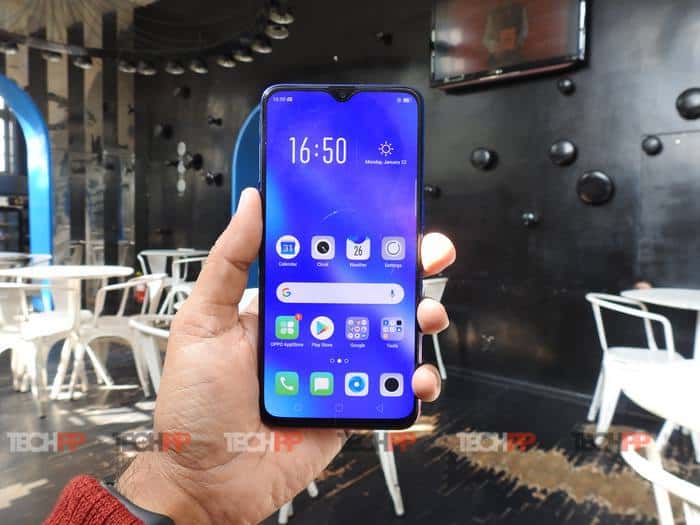 All of which makes the Oppo K1 a very good debutant for Oppo’s new K series of devices. The big question, of course, is: should you be investing Rs 16,990 in it? Well, Oppo deserves credit for taking on the likes of Xiaomi, Realme, Honor, and Nokia with a device that is not really a “me-too” one. The K1’s troika of AMOLED display, in-display fingerprint scanner, and drop notch are not commonplace at its price tag. And allied with a good processor and decent cameras, it is quite a formidable proposition. Yes, it does cost more than the likes of the Realme 2 Pro, the Nokia 6.1 Plus and the Redmi Note 6 Pro, but it does also legitimately bring more to the table. It is priced just above the Rs 15,000 price segment, but if marketed well, it could be a headache for all its members, and even its own successors, considering the benchmark it sets. For, the Oppo K1 does not try just to compete in its price segment but also to redefine what people expect in it.

Was this article helpful?
YesNo
TechPP is supported by our audience. We may earn affiliate commissions from buying links on this site.
Read Next
Skullcandy Mod Review: Betting on doing the basics well
#oppo #Oppo K1 #review