So much same to sameness

The uncrowned king of the budget smartphones, Xiaomi has just launched two new smartphones in the sub Rs. 10,000 category. The company has introduced two Redmi devices in the market, the Redmi Y3 and the Redmi 7. By the names of the two phones, it might seem like these are distant cousins at best but as we got out hands on the two phones, we realized they are more like identical twins born minutes apart.

A slight difference of gradient

The company may have launched the two devices under different series but wait till you pick up the two smartphones together. You will understand that these are two birds of mostly the same feathers (which is why they are flocking together in this first cut).

Put the pair on a table together (front up) and you will not be able to tell them apart. This is because both the smartphones sport identical displays— a 6.26-inch tall HD+ display with 19:9 aspect ratio and a screen resolution of 1520 x 720 pixels. It is topped with 2.5D glass and is protected by Gorilla Glass 5. 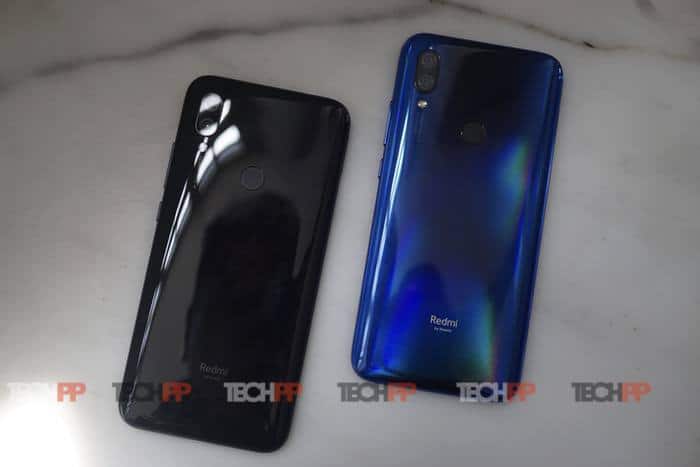 Those who hold a personal grudge against bezels might accuse the two smartphones of having slightly more pronounced bezels as compared to what is fashionable today but the brand has definitely trimmed them, especially on the top and the sides. The chin is a full-fledged bezel though. There are drop notches above the displays of the two devices that house the front-facing camera and right above these shooters are the earpiece. The smartphones come with on-screen buttons for navigation purpose, but you can dispense with them and use gesture-based navigation that MIU provides.

Flip the phones around and the difference might finally start (g)radiating. The Redmi Y3 comes with what the brand calls Aura Prism Design which gives the back of the smartphone a dark shade in the middle (vertically) that fades out into a light shade of the similar color as it spreads out. We got the Elegant Blue variant of the smartphone. The Redmi 7, on the other hand, comes with Aura Smoke Design, which apparently gives the Comet Blue and Lunar Red of the device a dark shade of the color on top which fades into a lighter shade as it moves downwards. We received the Eclipse Black variant of the Redmi 7 which did not really have a gradient finish and was simply black.

And that is where the visual difference train departs from the design station because that is really all the eye can distinguish between the two smartphones: the different gradient finish. 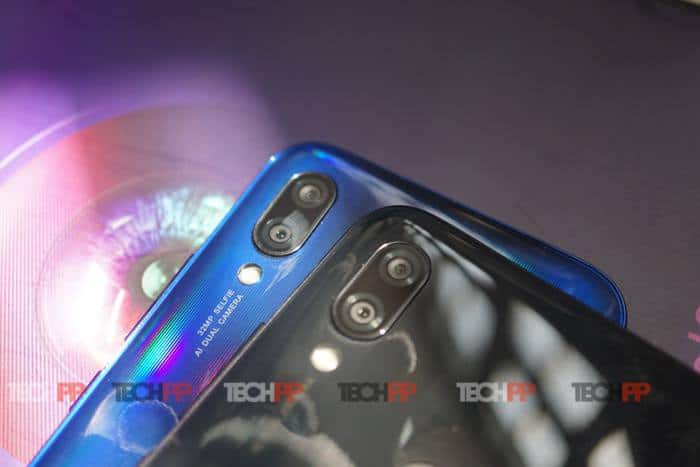 Both backs are made of polycarbonate but have a very glassy look and feel to them, making them very shiny and reflective. And not to forget, super prone to smudges, dust, and scratches. Check the sample images out if you do not believe us. The two devices have a vertical primary capsule on the top left that holds the primary dual camera setup for the phones, followed by a circular LED flash. The top half of the two Redmi backs also carry the slightly recessed fingerprint scanner. There is Redmi branding on the lower half of the back of the two phones.

The base of the Redmi Y3 and the Redmi 7 carry the speaker grilles and the micro USB port while the top of the smartphones holds the 3.5 mm audio jack and the infrared port. Both the devices come with a dedicated microSD card slot and dual nano-SIM card slots and the tray is placed on the left side. The right side of the phones carries volume rockers and lock/ power button. 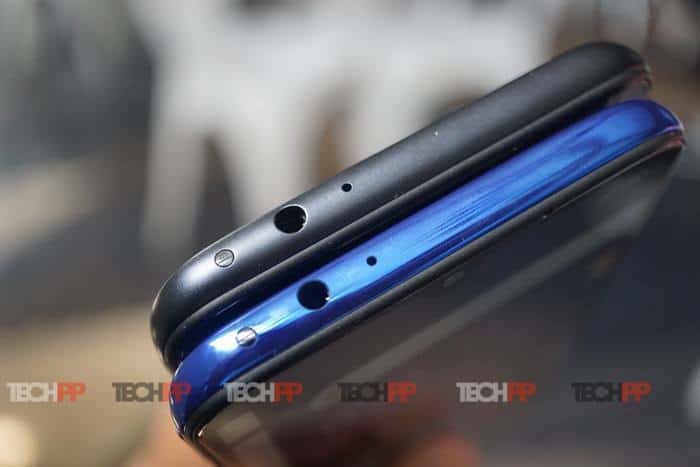 While the visual difference train stopped at the design station for only a few differences, the similarity train seems to be getting more and more members on board. It is not just the looks and the design that both smartphones share, they actually also come with the exact same dimensions and weight. Both the devices measure 158. 65 x 76. 43 x 8.47 mm and weigh 180 grams.

The two devices are pretty tall and are definitely not feather light. It is not going to be an easy task to use the phones with a single hand and we advise against the same. Having said that, we think both the devices look good and sit comfortably in one’s hand. They are very prone to scratches (as we have figured out after spending a very small amount of time with the two) but if you can keep them safe, they would definitely get you a few glances. It is a good thing both come with protective translucent cases out of the box.

Separated by a selfie camera 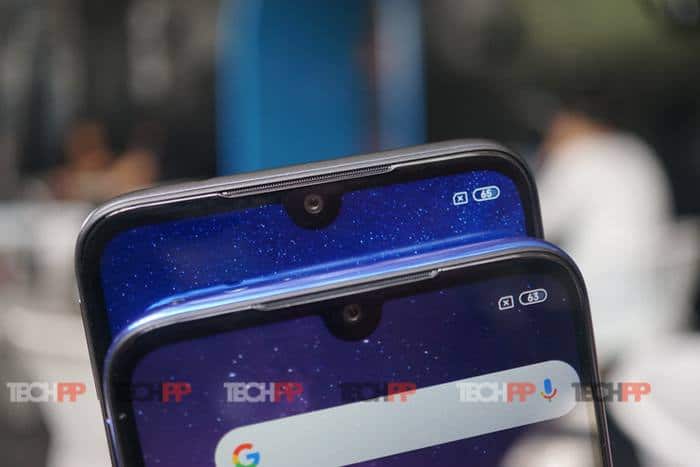 You know when two smartphones look that similar on the outside, you think they would have to be vastly different on the inside, otherwise what would really be the point of making two separate phones, right?

Well, Xiaomi does not think the same apparently because just like there was very little difference in the looks of the two smartphones, the case is pretty much the same in the specs department as well.

Now let us move to the specs that the two have in common. Starting with the display, as we mentioned above, both the devices come with 6.26-inch HD+ with a screen resolution of 1520 x 720 pixels. The phones take a step up in the processor department as compared to their predecessors. While the Redmi 7 jumps ship from MediaTek to Snapdragon with Snapdragon 632 as compared to the Redmi 6 which was powered by a MediaTek Helio P22 processor, the Redmi Y3 sticks to (Snap)dragon but has decided to give the new one some extra muscle. The Redmi Y2 was powered by the Snapdragon 625 processor while the Y3 runs on Snapdragon 632. 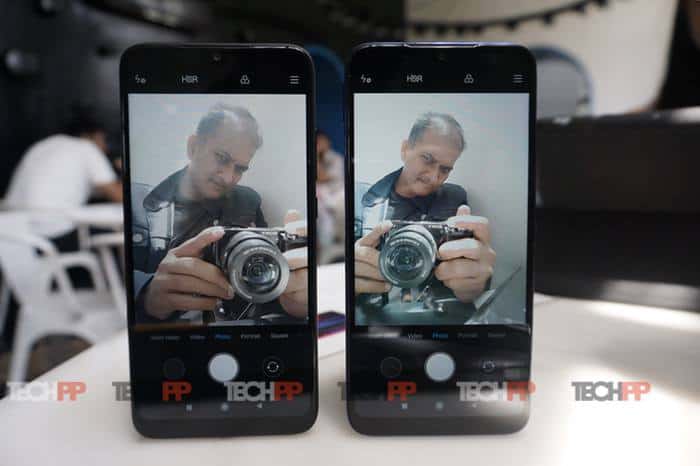 In the camera department, the two might be different on the front but the back is where they share the same sensors. The two devices come with the same dual-camera setup in terms of numbers. They both house a 12-megapixel main sensor with f/2.2 aperture bundled with a 2-megapixel supporting camera. Both cameras (front and back) on both devices are AI-powered. The front camera on both come AI Portrait mode and the rear ones come with AI Scene detection. The rear cameras are equipped with EIS and PDAF.

The Redmi Y3 and the Redmi 7 come with Android 9 (Pie) out of the box which is topped with Xiaomi’s in-house MIUI10. One of the major bump ups both device have received is in the battery department as both, Redmi Y3 and Redmi 7 come with 4,000 mAh battery as opposed to a 3,000 mAh battery that their predecessor were powered by. The connectivity options on the phones include Dual 4G, Dual VoLTE, Bluetooth, WiFi, GPS. 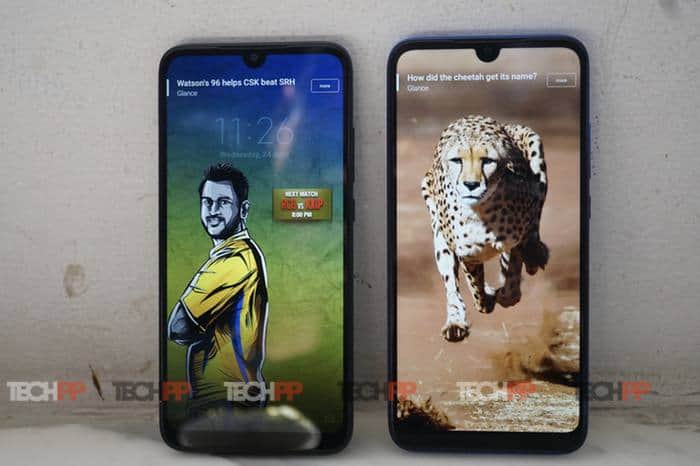 Starting at Rs. 9,999 and Rs. 7,999 respectively, the Redmi Y3 and the Redmi 7 seem like they started as one single phone but along the way Xiaomi just decided it wanted an extra phone in its portfolio and tweaked a few things here and there and Voila! Presented us with two smartphones. We really do not get why the company has launched two smartphones this similar and so closely priced and why it did not just launch the better version of the two. But ours not to reason why, we guess.

Along with facing heat from each other (obviously), the two smartphones also face a lot of competition from their other cousins in the business, the Redmi 6 Pro, that comes with a smaller but full HD display lurks in the same price segment. Not to forget the Redmi Note 7 which has a glass back and a Snapdragon 660 which is also available sub Rs. 10,000.

Apart from the in-house competition the devices also have to deal with the Realme 3 which brings a very good camera for its price and a bigger battery.

So what does fate has in store for the Redmi sisters? You have to wait for our detailed review but till then what we definitely know is that these two have a very steep mountain ahead of them to climb.