iOS 13 Adds Dark Mode, up to 2X Faster Performance and a Host of New Privacy Features

At the World Wide Developer Conference, Apple has unveiled the much-awaited upgrade to its mobile operating system, iOS 13. iOS 13 is a big step-up compared to iOS 12 in terms of features and cosmetics, and it also comes with a lot of UI elements and apps redesigned along with the most anticipated dark mode. 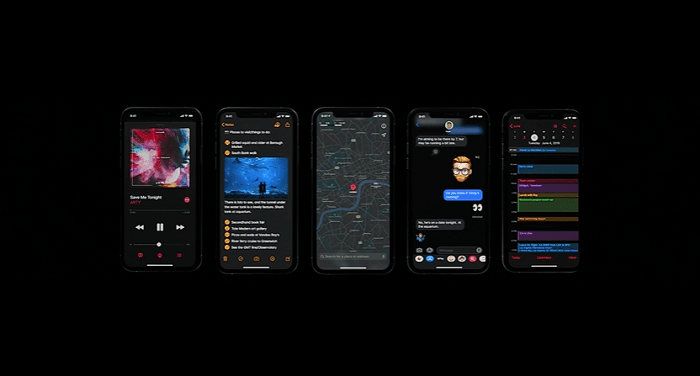 It’s not just about the cosmetics, however, with iOS 13. Apple claims app sizes to be reduced by up to 50% and app update sizes to be reduced by up to 60%, saving a ton of bandwidth and app download times for users. FaceID as well is now claimed to unlock you’re your device up to 30% faster than previous versions of iOS. Not just app sizes, but app launch speeds have received a bump-up too and Apple claims 2x faster launch speeds.

The main highlight in terms of the UI in iOS 13 is dark mode. Ever since the introduction of OLED displays on the iPhone, users demanded a dark mode since it would help preserve some extra battery life and Apple has finally delivered with a system-wide dark mode. System apps like calendar, messages, dialler etc. can now be used in the dark mode.

The default iOS keyboard has also received a major overhaul and now supports swipe to type, similar to third-party keyboard apps like Gboard and Swiftkey. There’s also a new sharing suggestions tab when an element is chosen to be shared, depending on your frequently contacted list. A few other apps that have been redesigned or have gotten new features are the Safari app, which now lets users add custom preferences on a per-website basis, the Apple Music app which displays scrollable lyrics and the reminders app that can tag people who are related to the reminder.

Apple’s major focus since the beginning has been privacy and there are some improvements regarding that as well in iOS 13. For example, an app can be granted permission to access your location only once, after which it has to request for access again next time it wants access. You can also “sign-in with Apple” on various platforms helping you to mask your credentials from third-party apps. One of the best new features is the ability to hide your email ID while registering for various services, for which Apple will generate a custom email ID linked to your actual email address.

The Camera and Photos app have also received an overhaul in terms of both features and design. There are new portrait lighting effects with the ability to control the intensity of the effect. The Photos app will now auto-play your videos on the thumbnail itself, and videos can also be edited from within the app, including stuff like rotating the video, adding filters etc.

Not just UI and apps, but even Siri has some new additions like the ability to read out and reply to text messages right from the AirPods, Neural Text-to-Speech and a new Indian voice. You can also share your audio using iOS 13 to two AirPods.