Imagine a portable charger that can charge your mobile phones and other portable devices, both by the normal wired connection as well as wirelessly (you just place the device on it). Now imagine that you can also use it as a wall charger to charge not only itself but also the devices to which it is connected. 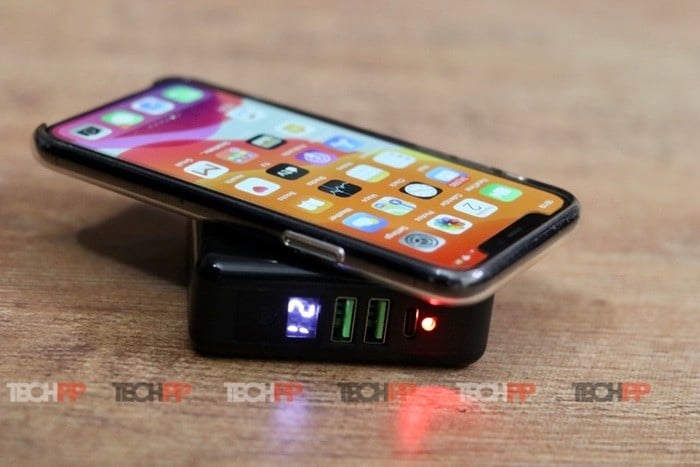 Sounds like quite a lot, doesn’t it? Well, the Tiitan Intelligent Charger tries to tick all those boxes to become perhaps the ultimate charging accessory for those on the move. And it does a very good job.

Yes, we know some would consider Rs. 2,499 for a 6700 mAh charger to be a steep price, especially when you can get a 10,000 mAh charger from other brands for less than half that price. But this is one charger that you do not buy mainly for the battery. 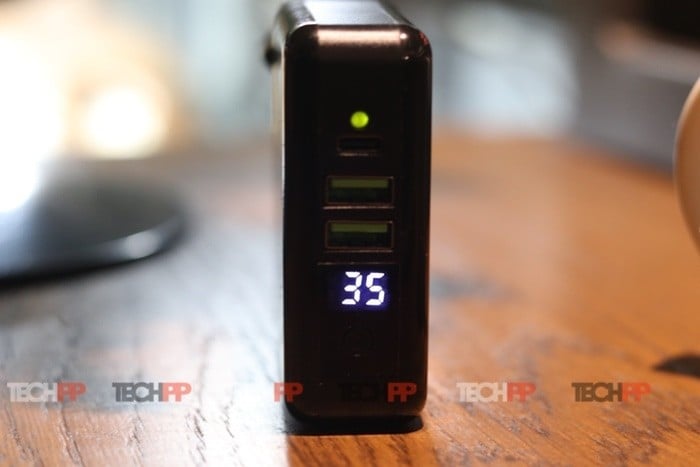 In appearance, the Tiitan Intelligent Charger looks a lot like a MacBook charger – a wall outlet charger with a square-ish brick built into it. The 6,700 mAh unit we received was black in color and while a little on the heavy side (about 250 grams), it was compact enough to fit into the palm of our hands. The upper part of it has the company logo, and on the flip side is the wireless charging part. One of its sides has three USB ports – two USB and one USB Type C – as well as a button to switch the charger on and off and a small LCD panel that shows the amount of charge in the battery in percentage. On the opposite side of this, you get the option to attach a two-pin wall charger (which is in the box) – you can slide it on (shades of the MacBook charger again) and attach it with the help of lego-like connector present on the charger and on the pin. The surface is unfortunately very glossy and is going to pick up smudges and scratches in no time at all, especially if you, like us, are the type that just chucks the portable charger into a backpack. 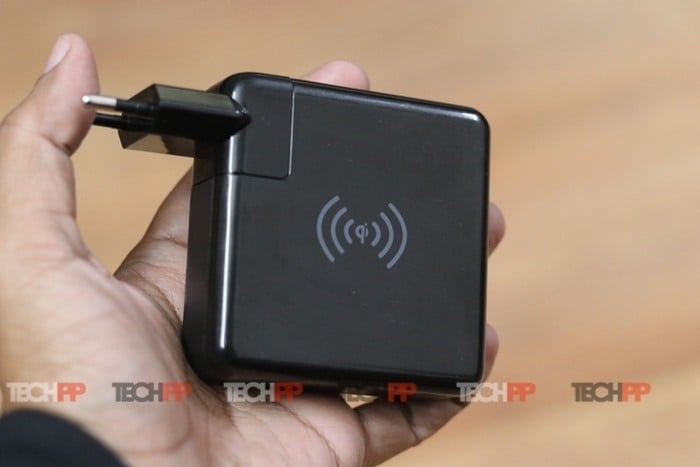 There is some seriously good charging muscle in there. All three USB ports support fast charging – the two USB ports support 15 W output, while Type C takes it up to 18 W. The wireless charging pad side can charge supported phone models up to 10 W and also any Qi-enabled phone at 5 W. Plug it into a wall and it has an AC input of 90-240 Volts.

So potentially, this is a single device that acts as a portable charger, wireless charger, and wall charger. And it actually works!

Yes, the wireless charging requires a bit of fiddling to get the device in exactly the right position on top of the charger, and there were occasions when the wireless charging stopped working altogether (you need to hit the power button to get it going again). But then this is a “true wireless charger” – you do not need to connect it to a power outlet for it to charge your device (an irony of wireless chargers we do not get). The battery itself takes about four hours to get charged. But that apart, we actually did not face any problems. The fact that the charger can act as a wall charger is a huge bonus – we could use it as a wall charger for our notebook and well, the battery in the charger got topped up in the process. 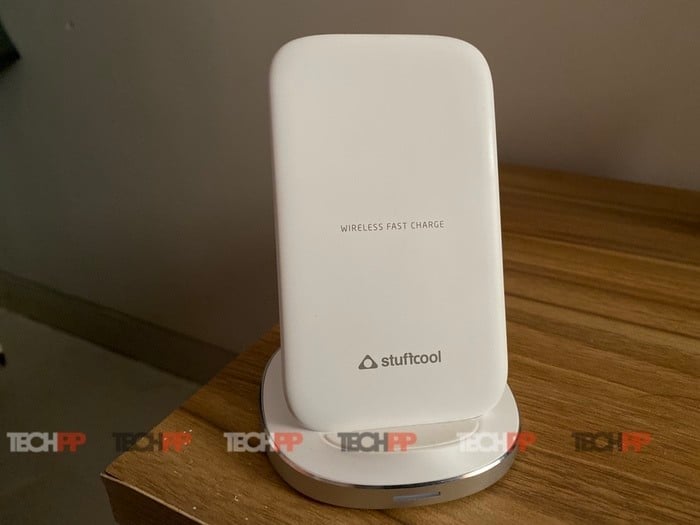 That is kind of super cool because quite often, charging the charger itself is a bit of a challenge, as you need a cable and a power outlet, but here you can plug the charger into a power outlet and use a connecting wire to use it to charge another device (notebook, mobile phone) even as it itself is getting charged. There is a slight problem here, though – because of its weight and bulk, the charger often cannot stay fixed in most wall outlets, but it works just fine in multiplug outlets and panels that lie flat on a surface. 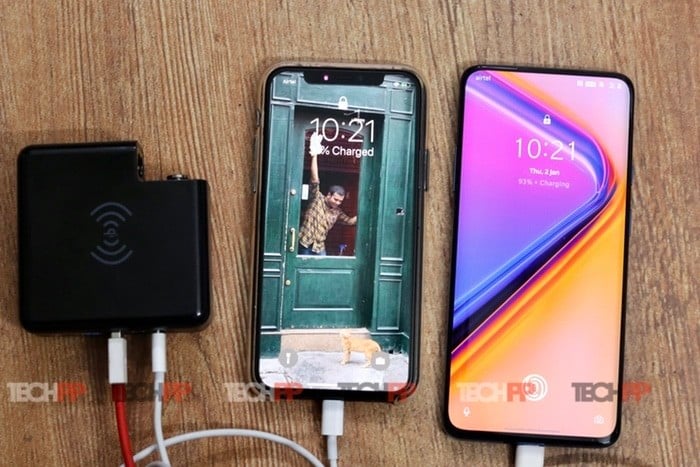 And the LCD display deserves a special mention. We have been using the charger for about a month now and it has been remarkably accurate and gives one a very good idea of just how much battery is being drained. Just for the record, you CAN charge up to four devices (three with wires and one without) from the charger itself. All of which makes it perfect for anyone who travels with multiple devices. No, it never gets uncomfortably warm, although a slight rise in temperature is noticeable. The brand claims that there are enough safeguards to keep your equipment in fine working order. 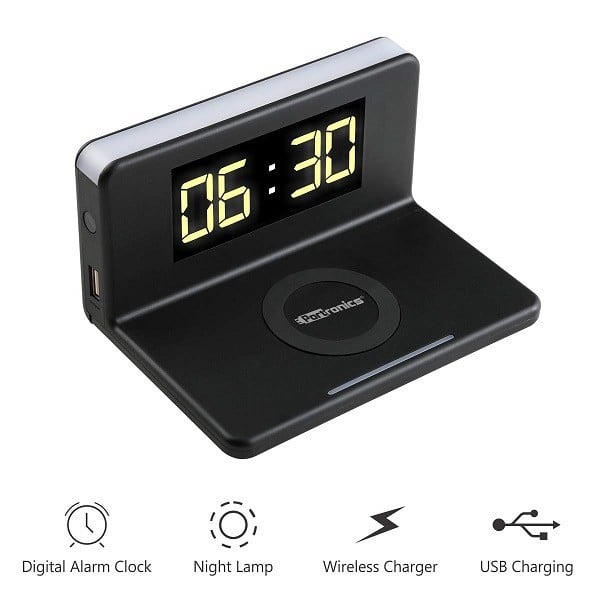 There is a tiny catch though – the 6,700 mAh battery is quite simply not enough if you are the type that charges 2-3 devices off a charger every day. It is good enough in an office environment where power outlets are not too distant, but it certainly will struggle if you take it on trips that extend beyond a day, especially when you consider that 4,000 mAh is increasingly becoming the default when it comes to battery capacity in phones. You can technically charge a notebook or a tablet off the charger too, but with that capacity, you will not really get too much battery bang for your bucks. There is a 10,000 mAh variant too, although that is more expensive at Rs 3,499. 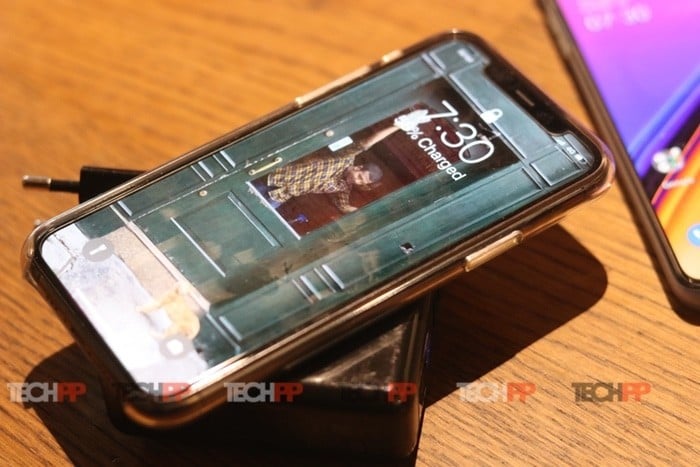 All said and done, we really like the Tiitan Intelligent Charger. It is simple to use, incredibly versatile and a very good option for anyone who carries multiple devices – and a number of us do just that these days (hey, a notebook/tablet, phone, and wireless headphones are increasingly becoming part of our daily burden). Yes, it is expensive. But it is a one-stop solution for all almost your charging needs. If you can look past the slightly smaller battery, it certainly is one of the most innovative charging solutions we have come across so far.

Are you hearing me?

You get the idea!

Review Overview
Was this article helpful?
YesNo
TechPP is supported by our audience. We may earn affiliate commissions from buying links on this site.
Read Next
iQOO 11 5G Review: Does It End Your Quest for the Ultimate Smartphone?
#review #Tiitan #Tiitan Intelligent Charger #wireless chargers