Xiaomi has officially announced the latest iteration for its skin/UI, the MIUI 12, at the launch of the Mi 10 Youth Edition, in China. The new update is based on Android 10 and brings along a host of features, a new interface with redesigned elements and animations, improved privacy and security measures, and more. Here’s a quick down of what’s new with MIUI 12. 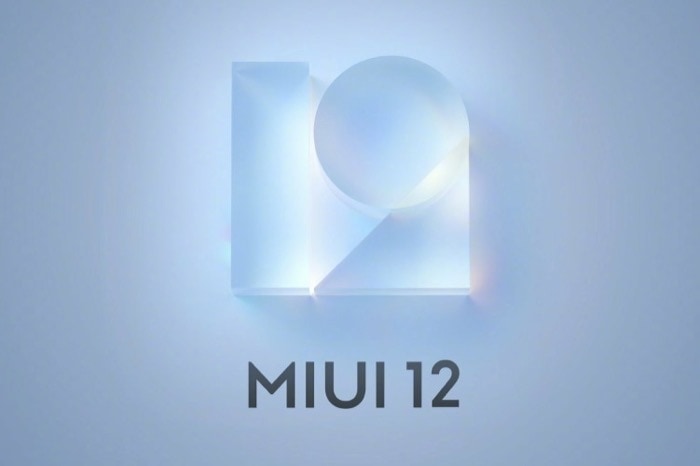 Xiaomi has made a series of changes to its UI with the MIUI 12, ranging from a new dark mode to new gestures, a cleaner UI, new animations, to a set of new static and live wallpapers.

Xiaomi introduced the dark mode with MIUI 11, and with the MIUI 12, it has revamped it with a bunch of improvements. To start with, the new dark mode comes with wallpaper dimming, which works by dimming the wallpaper depending on the daylight throughout the day. To offer better readability, the UI will now automatically make adjustments to the font-weight and contrast to reduce eye strain. 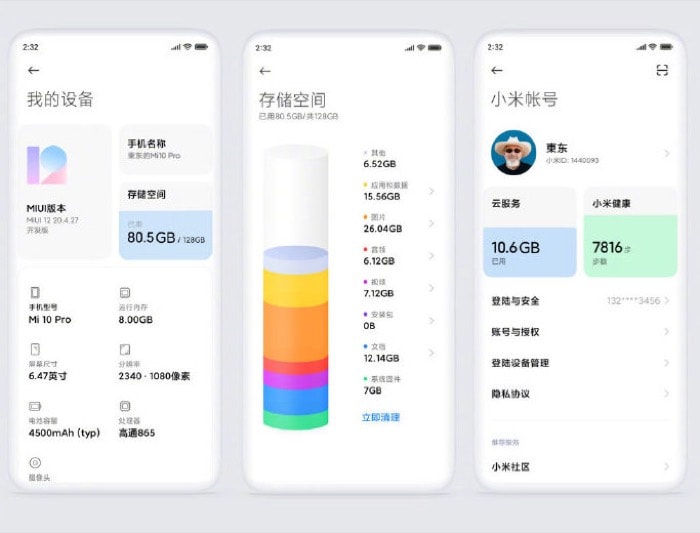 Alongside a cleaner UI, the latest iteration of MIUI also offers a more visual context for certain elements in the settings. So now, when a user goes into the settings and looks up for say, battery status, or storage availability, they get better context with the information presented in the form of charts and graphs to make the data easier to comprehend.

MIUI 12 also gets a set of new animation, which aims to make the experience smooth and fast. For instance, it gets a new weather animation that displays weather changes as time-lapse; has a blur animation in the background when closing an app; comes with new animations for charging, screen rotation, battery stats, arranging apps on the home screen, among others. 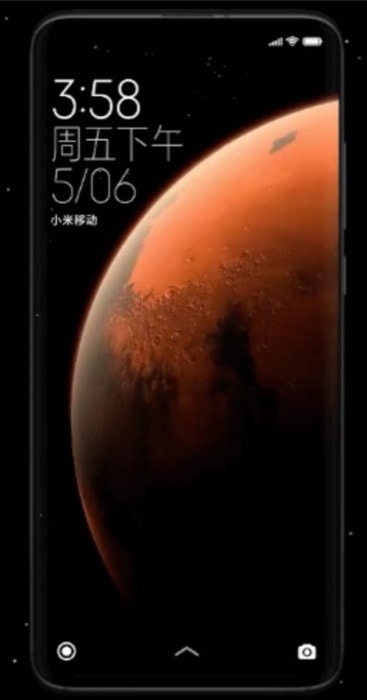 The latest update also comes with what Xiaomi calls Super Wallpapers, which are essentially animated 3D models of Mars and Earth created with the help of data from NASA. Users can set these wallpapers as their home screen or lock screen wallpapers and can have the night mode turned on to see the wallpaper adapt and change its appearance with the time of the day.

Besides the essential changes mentioned above, MIUI 12 also comes with a few noticeable subtle changes. These include a flatter and cleaner UI, which comes with clearer visual elements; Android 10-like gesture navigations; floating windows to allow users to have a separate window open throughout the interface; among a few others.

With MIUI 12, Xiaomi is introducing AI calling feature, specifically targeted for those with hearing disabilities. The feature helps users by transcribing the entire conversation and offering AI-suggested responses to make responding to messages easier.

Xiaomi has been testing its Mi Health app for some time now, and with the MIUI 12, it is finally bringing the service to its users. The app comes with a new AI algorithm that promises to offer accurate health tracking. Besides, it aims to help users in recording their fitness activities, such as walking, running, cycling, and climbing stairs, by having their phones in the pocket, without requiring an activity tracker. 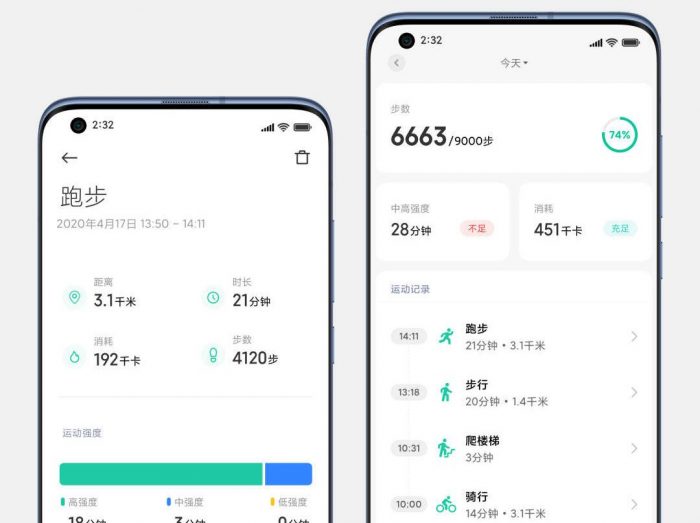 Moreover, Xiaomi has also included a sleep monitor in the new update, which ensures monitoring user’s movements while they are asleep to offer insights into the quality of sleep.

Xiaomi aims to improve privacy on its devices, and with the MIUI 12, this is pretty evident with the inclusion of three new improvement features, namely: Flare, Barbed Wire, and Mask System. The company also said that the MIUI 12 is the first mobile operating system to pass the TUV Rheinland’s “Android System Enhanced Privacy Protection Test”. 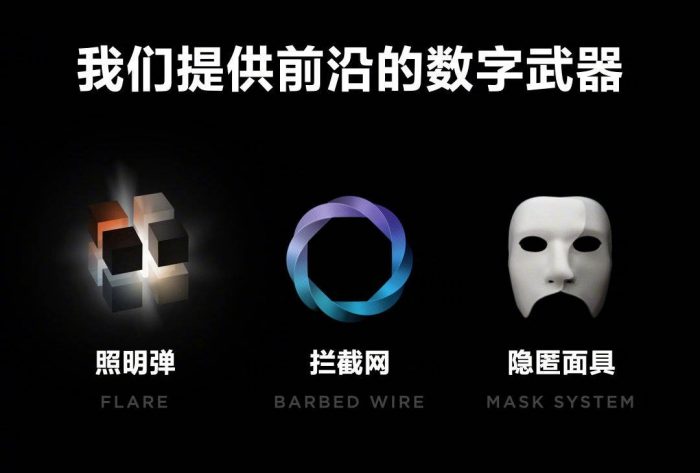 To begin with, Flare works by keeping a tab on all the permissions and sensitive information requested by each app on the device and notifying the user of the apps that could be violating the permissions.

On the other hand, Barbed Wire offers a few different permission-granting options to help users allow permissions as they see it fit. For instance, users can allow access to say, their location, only once, every time, or even reject it completely. Moreover, MIUI 12 also ensures the purpose an app is requesting permission for, and in case it turns out to be unnecessary, it hides the always allow option.

Lastly, to further add to the privacy, the Mask System comes in and works by ensuring no untrusted app on a user’s device can access personal information without requesting their permission. For this, it creates a virtual ID, which lets users protect their personal information from the prying apps.

Note: The above list only includes the devices that are slated to get the MIUI 12 update in China. We expect Xiaomi to make a separate announcement for devices sold in India and globally.

The MIUI 12 is already available for beta testing in China as of now. So, those interested can apply for the Beta build on the company’s official MIUI WeChat account. As for the availability of the first stable build, Xiaomi says it will begin rolling out to the first batch of devices by the end of June in China, with the global availability expected to be announced sometime later.

UPDATE: Today, ie. May 19, Xiaomi introduced the global version of MIUI 12, which at large, comes with the same set of features and functionalities, except for the inclusion of Google Mobile Services (GMS). Moreover, it has also released a list of eligible devices that will receive the MIUI 12 update over the span of the next few months.

Unlike the Chinese version, which will roll out to devices in three phases, the global variant will serve the devices in two waves.

The global variant of the MIUI 12 is slated to roll out at the end of June in two rounds for the aforementioned devices. Beta testers can get their hands on the Beta version starting next week.

TechPP is supported by our audience. We may earn affiliate commissions from buying links on this site.
Read Next
Eight years, Eight times Xiaomi surprised us with the Redmi Note
#MIUI #MIUI 12 #xiaomi #Xioami