This is one smartphone trend for which we will not blame Apple. Or Google. Or hell, not even Facebook.

We will blame Nokia!

Low light photography with a cellphone camera was literally like shooting an arrow in the dark (you had no idea what you would hit and where) before Nokia brought it to the centrestage with the Lumia 920. Suddenly, taking pictures in the dark was a thing, and “low light performance” became a part of the tech reviewer’s terminology. Low light itself got redefined, going from twilight and relatively dark-ish places to shooting right out in the night. 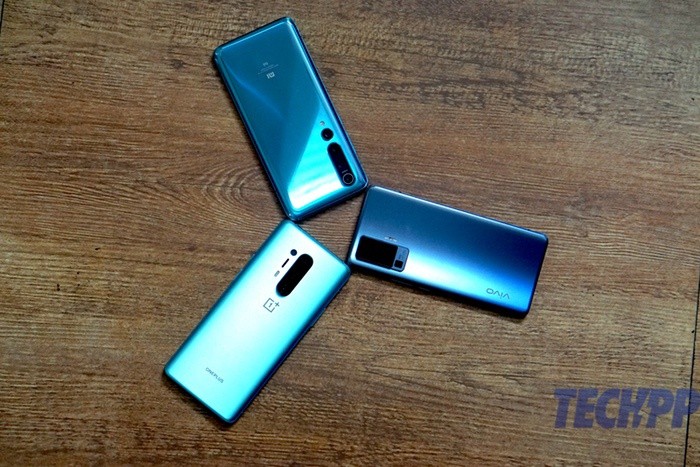 So when Vivo launched the Vivo X50 Pro with its gimbal camera system, that claimed to deliver not only more stable videos but also better low light performance, we decided we would take it for a stroll at night. And just to make things more interesting, we also decided to take the Xiaomi Mi 10 and the OnePlus 8 Pro, two other devices in the same price segment along. And the idea was to shoot in the night, with nothing except for the odd street light and of course, lights from some of the apartments.

We used the “night mode” of each of the devices – Nightscape in the OnePlus 8 Pro, Night in the Vivo X50 Pro, and (also) Night in the Xiaomi Mi 10. The snaps would be taken at the given presets without any adjustments, as that is how most users take them. We also kept the flashes off, because they tend to interfere with night mode shots. For those who need reminding, the Vivo X50 Pro comes with a main 48 megapixel Sony IMX 598 sensor with a gimbal camera system, while the OnepLus 8 Pro comes with a 48 megapixel Sony IMX 689 main sensor with OIS and the Mi 10 packs in a Samsung Isocell 108 megapixel main sensor with OIS. In terms of aperture size, the X50 pro has an f/ 1.6, the OnePlus 8 Pro has an f/1.78 aperture and the Mi 10 has an f/1.69 aperture.

As we took pictures, we realized that in terms of speed, the OnePlus 8 Pro was easily the fastest, with the Mi 10 coming second. However, the X50 Pro took many more snaps to combine into a single one, and while this took time, it often resulted in delivering some surprising detail!

After walking for about half an hour, taking more than a dozen photographs, having answered half a dozen queries from paranoid security guards, and registering the total disinterest of the locality cats, we sat down and went through the results. And well, to say they were interesting would be an understatement.

(Please note that the conclusions are subjective – every person has his or her concept of a good picture. These are based on ours.)

The horizon – looking out at the city

These were the snaps that started it all. We posted three snaps of the Delhi nightscape from each of the phones on Twitter, and that triggered an entire debate on which was the best. It also showed the character of each of the cameras – the X50 Pro was clearly the brightest, lighting up areas that we could not see ourselves, the OnePlus 8 Pro is not the greatest low light performer but took a steady enough snap, but it was actually the Mi 10 that surprised us the most, coming up with a snap that was brightened a little but not in as exaggerated a manner as the X50 Pro. It lit up a bit of the night, without letting us forget that it was the night after all – the streetlights on the road in the background were particularly well-captured.

The corridor – of certainty!

We started our stroll from a corridor next to the parking lot. It is not particularly well-lit so we decided to take a snap here as well. And here, the Mi 10 and the Vivo X50 Pro both brightened up matters considerably, while OnePlus kept things relatively dark. Te Vivo X50 Pro, however, scored on detail, such as the textures on the nearby pillar, even though we thought we saw a slight tint of pink.

The apartment that seemed different…lit!

On stepping out, we looked up and saw an apartment window with a different kind of light – more bulb than CFL. So we decided to see how the three phones would capture it. And by now, a pattern was being established – the Vivo X50 Pro and the Mi 10 would take brighter snaps, while the OnePlus 8 Pro would have slightly darker shots. And this was repeated here. Ironically, while both the X50 Pro and Mi 10 had a slight glare issue, the OnePlus 8 Pro did not. But by and large, this was a tie between the Mi 10 and the X50 Pro.

The main gate with guards

The pictures of the main gate with a guard conversing with a few visitors in the distance were decently captured by all three. The X50 Pro did seem to light up the picture much more, but also added a slight purple-pink tint to the shot. The Mi 10 did not get quite as much detail (theX50 Pro got the leaves better) but its capture seemed more realistic. The OnePlus 8 Pro once again brought up the rear, its images being good enough but not really in the class of the other two.

The signpost, with something on it

There is a signpost near the main gate with a bright light right over it. And just when we were thinking that the OnePlus 8 Pro was out of its depth in this group, it showed that it could take a very handy snap. While the Mi 10 and the X50 Pro both took relatively bright images, they seemed to have some problems handling the glare from the light overhead. The OnePlus 8 Pro surprisingly not only handled the light a bit better but also seemed to capture the shadows best. The Vivo X50 Pro surprisingly delivered a slightly blurry shot here – the lettering on the board is the least clear in its image, and the slightly pink tint is again very visible. And by the way, the Mi 10 and the OnePlus 8 Pro both captured a tiny lizard on the board much more clearly than the X50 Pro did. A little odd.

The second gate, without guards

This is another gate with slightly different and an empty chair in front of it, and light coming from beyond the gates. And once again, the OnePlus 8 Pro surprised us. All three phones had issues with the glare of the lights, but while the Mi 10 and the X50 Pro tried to brighten up the scene, the OnePlus Pro managed to convey a feel of the night and handled the glare from the lights a little better, Even the single chair looked better on the OnePlus 8 Pro snap.

The bench in the light

A reddish-orange bench under a streetlight. And all three phones did a decent job of capturing it but we felt the X50 Pro delivered more telling detail, and its colors were closest to the original. The Mi 10 this time brightened up the shot too much, while the OnePlus 8 Pro delivered a comparatively dull shot.

The bench in the dark

Another bench, this time one in the lawn, and in darkness. For us, this really highlighted the difference between the three phones in the night mode. The OnePlus 8 Pro was largely off the mark here, even losing some focus, the Vivo X50 Pro brightened up the scene the most and got some textures of the grass into play, but the Mi 10 got the best blend of a bit of light and shade into play. There did seem a touch more detail in the X50 Pro shots, but we found ourselves liking the Mi 10 the most.

The grass is greener on the lawn

This is the lawn and it is in almost pitch darkness. There are no lights on the lawn itself. We once again found ourselves liking the Mi 10 snap, as it captured just enough detail without trying to aggressively brighten the snap – something the Vivo X50 Pro seems a little guilty of (the light in the X50 Pro’s snap seems almost white!). The OnePlus 8 Pro actually delivers a reasonable enough snap once again.

Leaves and flowers cannot be left

Want to take pictures of flowers in the night? The Vivo X50 Pro is the phone for you really. The Mi 10 actually seemed a little lost in terms of focus, and the OnePlus 8 Pro once again stayed in the zone of comfortable mediocrity, delivering a shot that was neither bad nor exceptional, The Vivo X50 Pro, however, delivered a superb shot here, considering the conditions.

We ended up on a divine note, with tiny statues of some Gods lined up against a wall. And the comparison ended the way it had begun – the OnePlus 8 Pro did a decent, if slightly dull shot, the X50 Pro captured some impressive detail and textures, but once again, we really liked the result of the Mi 10, which seemed to capture the shades of bright colors in the stature best of all.

So what conclusions did we draw from our night mode shootout? Well, we are not going to go in a round by round count here because this was a very casual test, done simply by roaming around. And honestly, we think those are the best because that’s how most smartphone cameras are used – casually. 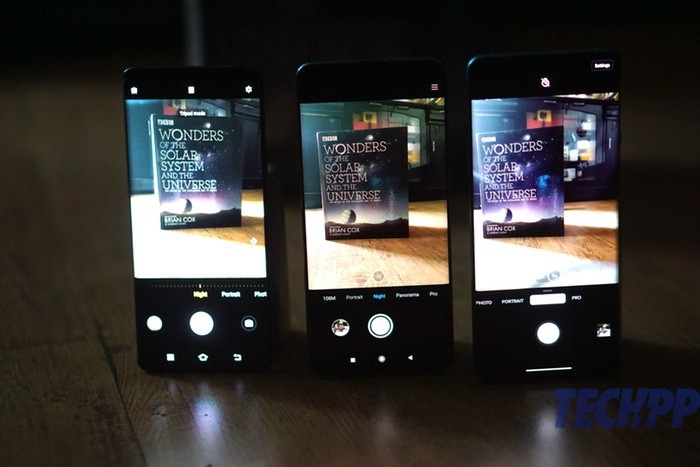 And our casual usage definitely proved one thing: if your idea of night photography is to turn darkness to light (all say Hallelujah), then the Vivo X50 Pro is definitely the phone for you. Yes, the camera’s night mode does seem very aggressive but it certainly is very capable of making even the darkest places seem, well-lit (pun intended!). The OnePlus 8 Pro is not a low light champion but of the three, tended to respect the night the most, which many photographers might actually appreciate, as it does tend to be closer to what one really sees, or does not see (it is the night, after all). The surprise package for us, however, was the Xiaomi Mi 10, which was perhaps the best in terms of striking the balance between light and shade, and did so very pleasantly and with more than a reasonable amount of detail. We would perhaps pick it out of the three for the most balanced performance.

To return to the question that many are asking: Is the Vivo X50 Pro a low light champ? It definitely is. It lights up your darkness like a Christmas Tree. And many will just love that. The option to get this level of color and detail in dark conditions is nothing short of amazing. You do not like the night to be THIS lit?

Blame Nokia! They started it all.

Was this article helpful?
YesNo
TechPP is supported by our audience. We may earn affiliate commissions from buying links on this site.
Read Next
How to Take a Screenshot on a OnePlus Smartphone
#Camera Comparison #comparison #oneplus #OnePlus 8 Pro #Photography #Vivo #Vivo X50 Pro #xiaomi #Xiaomi Mi 10