In the 1980s, Hero Motors turned the Indian motorbike industry on its head, by launching a motorcycle that managed to deliver very good mileage without compromising on other fronts. There had been vehicles with good mileage in the past but Hero Honda took things to another level and what is more, did so without cutting back too heavily on features like design, power, and pick up speed. And this earned the tag of the “fill it, shut it, forget it” bike (after an ad campaign with that title) – its mileage was so good that you just had to top up the fuel tank once and drive around for a while without worrying about running out of fuel. 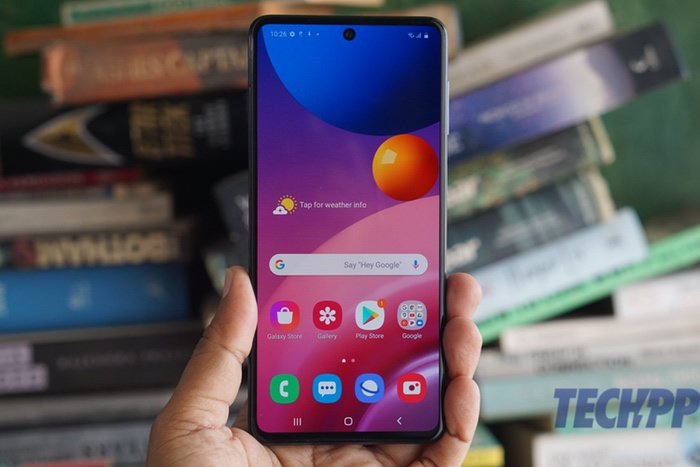 Samsung has attempted to do something similar with the Galaxy M51.

Just as Hero Honda had shown us that you could get terrific mileage from a motorbike that did everything else very well too, the Galaxy M51 delivers a huge battery and does so without cutting too many corners. We have had big battery phones in the past as well, but they generally tended to be bulky and slightly underpowered affairs, with not the greatest displays, cameras, or design. Their biggest asset was supposed to be the battery. And that was it.

Well, the battery is the forte of the Galaxy M51 as well. It is perhaps the first phone from a major brand to sport a massive 7000 mAh battery in recent times. And it charges reasonably quickly as well – a 25 W charger takes it from 0-100 in 115 minutes. It is even accompanied by a USB Type C to Type C charging cable, allowing you to charge other devices off it. Standard big battery phone stuff, you know. But the amazing part? The Galaxy M51 does not LOOK like a big battery phone.

And that is because while the M51 is a big phone, and while it is a little on the heavier side, it does not seem to be grossly oversized – in fact, it is impressively slim at 9.5 mm and at 215 grams, is actually lighter than the iPhone 11 Pro Max. Yes, you will need two hands to operate it most of the time, but then we do seem to have entered the era of two-handed phones. But by and large, the M51 is a tall, rather smart looking phone, which follows the design aesthetic of the recently released Galaxy M31s – glass in front with a punch hole notch in the center, and slightly glossy glasstic (plastic with a glass-like finish) on the back, with a rectangular camera unit. And yes, a fingerprint scanner on the side!

My, what a display and cameras…and Snapdragon is present (Will Exynos be ex…errr…?) 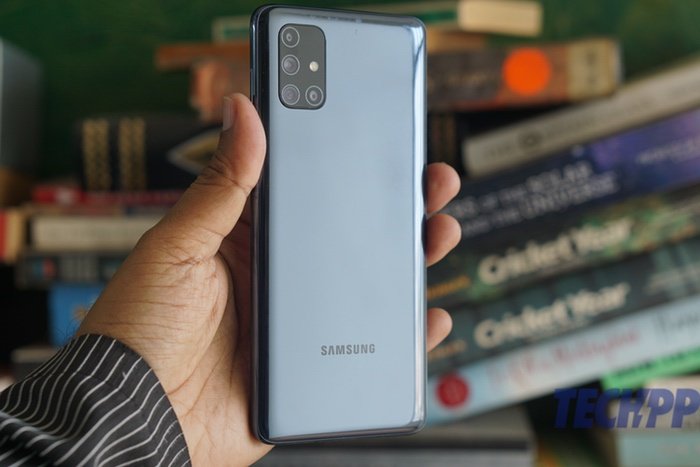 And just as Hero Honda stood out from the competition because of its mileage, but more than matched it in other departments too, the Galaxy M51 packs in a very impressive spec sheet. That display is a 6.7-inch full HD+ Super AMOLED one, albeit with Gorilla Glass 3 protection (a little dated). Of course, it is a Samsung display so it is bright, and colors seem to pop with just a hint of oversaturation. The camera set up is impressive too and very similar to the one we saw on the Galaxy M31s – a 64-megapixel Sony IMX 682 sensor accompanied by a 12-megapixel ultrawide sensor, a 5-megapixel depth sensor, and a 5-megapixel macro sensor. That set up delivered some stunning shots in the M31s, as did the 32-megapixel front-facing camera in that tiny notch.

The biggest surprise however is the presence of a Qualcomm Snapdragon 730G chip in the device, rather than an Exynos, a bit of a rarity in Samsung devices in India. No, the 730G is not the youngest and brightest chip on the block but it is a proven performer in the mid-segment (as we saw in the excellent Poco X2) and backed by 6 GB and 8 GB of RAM and 128 GB of storage (expandable to 512 GB using a dedicated microSD card slot), it is likely to turn in a very decent performance. Connectivity-wise, you get two 4G slots, GPS, Bluetooth, and Wi-Fi. 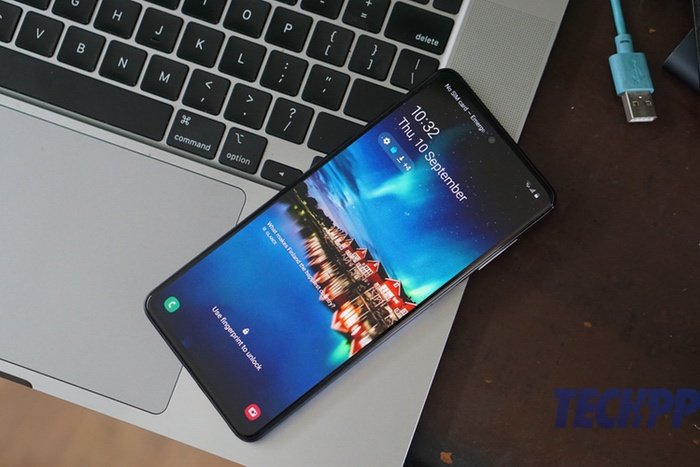 In many ways, the M51 seems like a bigger and more powerful version of the Galaxy M31s, which in itself was a very impressive device. The M51 brings a bigger display, a Qualcomm processor, and of course, THAT massive battery to the table. And it does so at a price that at Rs 24,499 puts it right in the range of the likes of Oppo F17 Pro, the Realme X3, the still-very-good Redmi K20 Pro, and of course, the current premium mid-segment darling, the OnePlus Nord.

The fact that it seems to have more than enough to take on that lot reveals its potential. Of course, we will know for sure only when we have finished our review and comparisons (yes, there will be one with the Nord). But at first glance, the Galaxy M51 is perhaps the first device in a while to have combined a REALLY big battery with some decent design and specs that do not seem out of place in its price segment.

Yep, we are getting them “fill it, shut it, forget it” feels.

Was this article helpful?
YesNo
TechPP is supported by our audience. We may earn affiliate commissions from buying links on this site.
Read Next
Samsung Galaxy Unpacked 2023: Galaxy S23 Ultra with 200MP, Galaxy Book 3 with...
#First Cut #First Impressions #hands on #samsung #samsung galaxy m51