The fact that many consider the Pixel 4a to be aggressively and impressively priced at Rs 29, 999 tells you a story. On paper, that price seems ridiculous, when you consider what the product brings with it – a 5.8 inch full HD+ AMOLED display, a Qualcomm Snapdragon 730G processor, 6 GB RAM, 128 GB storage (non-expandable), a single rear (and rare) 12.2-megapixel camera with a Sony IMX 3636 sensor (albeit with OIS), a front-facing 8-megapixel camera, a rear (and increasingly rare at this price) fingerprint scanner, a 3140 mAh battery with reasonably fast 18W charging. These are the kind of specifications that one generally associates with a device that costs much lesser, in some cases, even half as much.

But then, ah, this is a Pixel. A phone that comes with a G for Google on the back. And one that has never been launched in India at anything below Rs 39,999. That changes everything. Or well, some things at any rate. Kinda sorta.

The Pixel range is designed to showcase Android. And while some Pixel devices have turned heads with their appearance, the 4a is unlikely to be one of them. It is rather plain and just comes in Just Black. How just or unjust is that is another matter, What does matter is that it looks relatively unobtrusive and can be called smart without any danger of being spectacular with its Gorilla Glass 3 front and matte plastic back, which looks decent enough and stays largely stain and smudge-free.

It is reasonably slim at 8.2 mm, has a USB Type C port at the base, a 3.5 mm audio jack (yes, hooray) on top, a tiny punch hole notch on the left corner of the display, a roundish fingerprint scanner on the back, and a square camera unit on the rear where the flash and lens are diagonally opposite each other and the flash is actually placed above the lens. The phone also comes with a green-ish power/display button (which is still for some reason placed above the volume rocker, rather than below it, as in most phones) as its second most remarkable design feature.

Yes, we said “second most” because the most remarkable, or certainly most remarked upon design element of the Pixel 4a is going to be its size. At 144 mm, it is relatively small for the day and age and is exactly the same length as the iPhone 11 Pro and only slightly thicker. At 143 grams, it is definitely one of the lighter phones out there. It will slip into most hands and pockets unobtrusively and were it not for that greenish power button or the faint ‘G’ on the pack, it would not attract much attention for anything other than its compactness. It is the equivalent of the quiet guy in a full sleeves white shirt and simple plain denim sitting with a book in a disco — not bad looking but not seeking attention either.

The camera that makes you say cheeseburst, not just cheese! 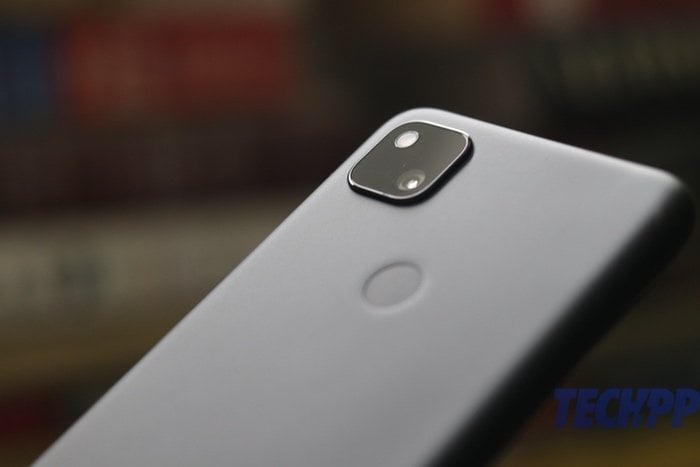 But if its design does not seek attention, the Pixel 4a’s camera definitely does. Note the singular. It has been a while since we saw a device in this price segment with a single camera, and on paper, when you consider that this solitary lens is one that is more than two years old, you might wonder what is served by its existence. Well, that single lens is perhaps the only feature that makes the Pixel 4a punch above its price weight. With a little — make that a lot of — software magic from Google.

Google had pretty much redefined phone camera photography with the Pixel series, adding all sorts of algorithms and AI to camera imagery to deliver images that were frankly minded boggling. We think computational photography, as many called it, hit an absolute peak with the Google Pixel 3. And the 4a is pretty right up there with that worthy — it uses the same sensor after all, and Google has upped its software game since. So if you are looking for pictures that are startlingly rich in detail, this is the camera for you.

No, it is not as far ahead of the competition as it once was — you now can get surprisingly good photographs even from devices priced around Rs 12,000-15,000 — but it is still among the best in terms of still photography. Yes, you will sometimes see details in pictures that did not seem to be noticeable when you took the snap itself, and sometimes the colors can be a little odd (erring a little on the dull side), but by and large, the Pixel 4a delivers some terrific stills. Even low light performance is outstanding. And that applies to the selfie camera as well.

Can we have a new camera app, please!

That said, it is a relatively limited camera. There is no dedicated ultrawide or telephoto lens. Yes, you can use 3x-4x digital zoom without losing too much detail, and Google’s superb AI delivers great portrait snaps without a depth sensor, but if you have been using proper ultrawide and telephoto sensors, the difference will hit you. Google has also persisted in keeping a rather barebones camera app. The number of options is limited — you cannot control HDR or even have the pro-level options or filters in the app. Yes, you can rectify this by getting a third-party app, but well, we really think Google would handle this a whole lot better than anyone And well, while stills are fantastic, video tends to be a little hit-and-miss. On some occasions, image and video processing also seemed to take a little more time than usual. 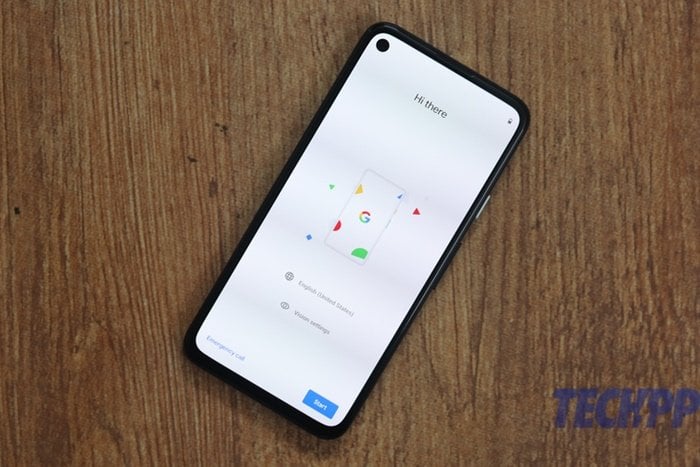 Still, all said and done, the Pixel 4a’s camera is a classic point and shoot. Which should be good enough for most users. And if it is simple stills you seek, this is close to as good as it gets in the mobile phone camera space. It is not the runaway winner that its predecessors were, but is still a very good camera.

The camera is the one area where the Pixel 4a delivers as per or even above its price tag, but in others, it is rather more routine. The 5.8 inch OLED display is a good one but not really exceptional — it is reasonably bright and is usable even in bright sunlight but the viewing angles are not the greatest. Spec hunters will frown at its routine 60 Hz refresh rate, but we do not see it as a deal-breaker. We also felt that the dual stereo speakers could have delivered a better output — the quality of sound is decent but the volume is a bit on the lower side. Thank god for earphones and that 3.5 mm audio jack. 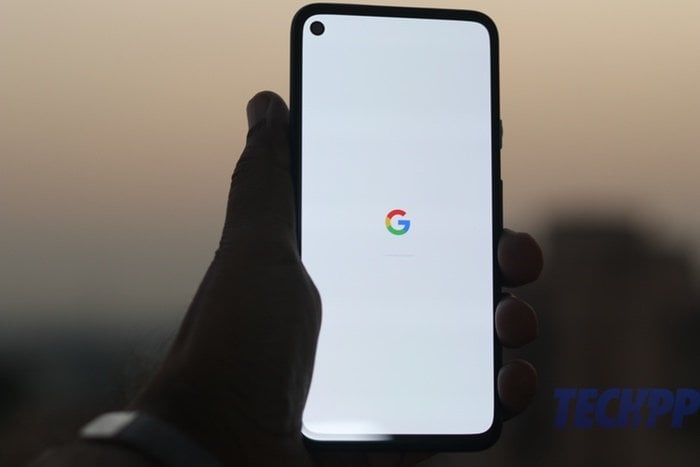 The Qualcomm Snapdragon 730G chip driving the phone does a good job most of the time. If you are using the phone for relatively routine work like messaging, emails, social networking, and a fair deal of photography, you will mostly sail through with no problems at all (barring the odd lag while processing some images and videos). Even casual gaming is handled reasonably well. Get too far into the likes of Asphalt and Call of Duty, though, and the lags will hit you. In fact, there were times when even switching between apps seemed a little stop and start. The general experience is smooth, though.

And that can be attributed to the fact that the Pixel 4a is one of the few devices out there that runs Android exactly the way Google serves it up, with no flavors or skins: clean, uncluttered, and with zero bloatware. The result is an incredibly clean interface with which you can do whatever you wish while remaining assured of getting regular software updates. A big surprise is the 3140 mAh battery, which seems modest in these days of 5000 mAh batteries at much lower price points, but still manages to see off a day of normal to heavy usage. It gets charged in about an hour and a half with the in-box 18W charger, which is decent enough, if not exceptional. No, the Pixel 4a will not be seen as a battery monster but it is not a deal-breaker by any means, although some might hem and haw about the absence of faster (and perhaps even wireless) charging.

Ok Google, should I buy it? Depends on how OK you are with Google! 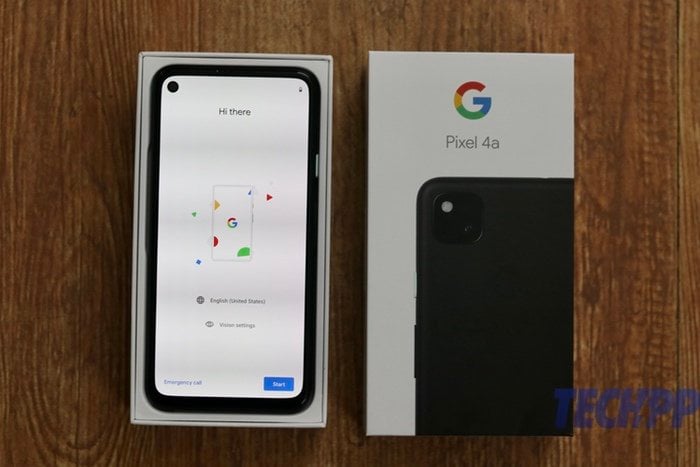 So who should be going for the Pixel 4a? Some would consider its Rs 29,999 price to be very competitive. And by Pixel standards, it indeed is — hey, the Pixel 3a was priced at almost Rs 40,000. However, when seen in comparison with other players, such as the OnePlus Nord, which features a 90 Hz refresh rate display and a newer Snapdragon 765G processor at a starting price of Rs 24,999; or the Samsung Galaxy M51, which brings in a similar processor, a bigger display, decent cameras and a MUCH bigger battery at Rs 24,999 as well; or even the newly launched Poco X3, which features a Snapdragon 732G processor and a 120 Hz refresh rate display at Rs 17,999… well, when seen in comparison with these, the Pixel 4a starts looking a little out of its depth. There are also the still very good Redmi K20 Pro and the not-so-great -display but awesome cameras toting Realme X3 Superzoom which come with much better processors at lower prices.

All of which makes the Pixel 4a a phone really for the Google fan club. And that is a huge one. The phone’s biggest assets are its uncluttered and clean Android with perhaps the fastest updates you can find, and one of the best point and shoot cameras you can find on a handset. The compact form factor is handy (pun intended) too, but we really feel that the biggest factor that works for the Pixel 4a is that it is not only the newest phone you can get in India with a Google connection but by far the most affordable too. That Rs 29,999 price tag which seems excessive by mainstream mid-segment standards is the lowest ever to be seen on a Google Pixel on launch.

A Godphone for the Google crowd? The Pixel 4a is it.

Review Overview
Was this article helpful?
YesNo
TechPP is supported by our audience. We may earn affiliate commissions from buying links on this site.
Read Next
OnePlus Buds Pro 2 Review: Great buds for pro bros with OnePlus devices
#google #google pixel 4a #Pixel 4a #review