With wireless charging becoming one of the most talked-about and premium features in smartphones and other devices, manufacturers are coming up with chargers to meet our newfound wireless needs. One such brand is RAEGR. The Bangalore-based brand has been very active in the field of wireless chargers and has quite a few wireless chargers in its portfolio. And it has now released the MagFix Duo Arc M1330, a new 15W wireless charger. But this is not your run-of-the-mill basic wireless charger. The Arc M1330 actually is an attempt to let you charge two devices wirelessly at the same time. And do so without being shaped like a tray that is difficult to carry around. The charger can charge not only your iPhone 12 (or any other in the 12 series) but also your AirPods that have a wireless charging case, as well as your Apple Watch (all of them barring the very first one). 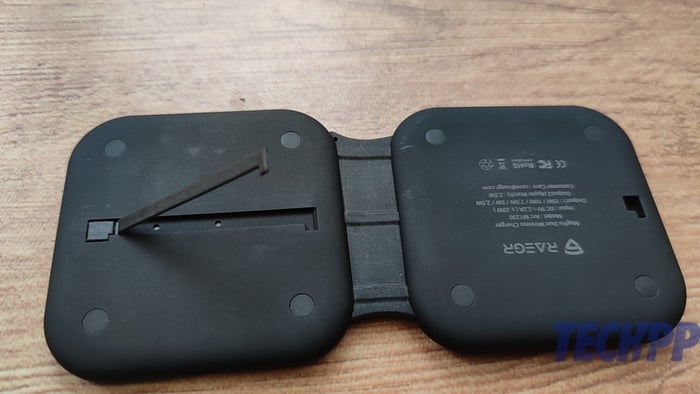 Yes, before you ask, this is a device that is mainly marketed as being for those Apple products, although it can change devices that are Qi-certified. Basically, the charger presents itself as the ultimate tool to charge your day-to-day Apple products. But does this RAE(GR) of charging-hope really shine?

While one can really get creative with the design of a smartphone, there is not much scope for innovation when it comes to a wireless charger. All of the wireless chargers we have used so far are basically flat pads that come in different shapes and sizes. While the Duo Arc 1330 might look like an ordinary wireless charger at first, it is actually very different. The charger is basically two black, identically sized square charging pads that are joined by a flexible silicon-like material.

Of the two pads, one is dedicated to charging the Apple Watch. It has a small, circular dent right in the middle that mirrors the dent on an Apple Watch charger. The dimple on the watch charging pad also comes with a small Apple Watch impression to make matters more obvious.

The other pad can be used to charge your iPhone or AirPods, or as we pointed out, other smartphones that come with Qi wireless charging support. This pad comes with a brand logo in the middle. There is a USB Type-C port on the side of this pad. Both charging pads have grey squares of different sizes on them made of slightly harder plastic, which are the charging areas. 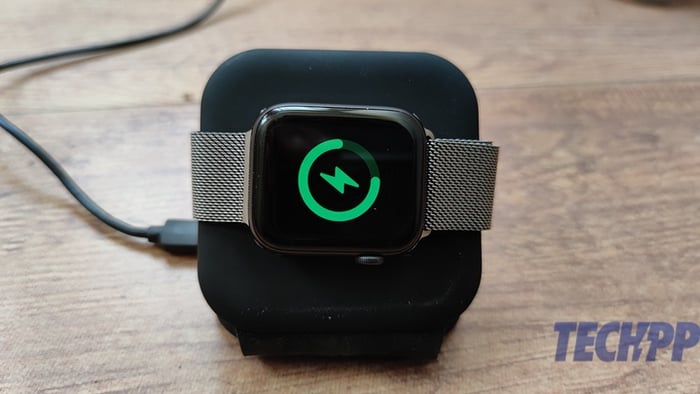 There are a few nick-knacks that the Arc 1330 brings to the table that gives it a little edge over the ordinary chargers. Because the two charging areas are connected by a bendy silicon bridge, this makes the wireless charger extremely portable, which is a major plus in the wireless charging world, where you cannot think of carrying a charger in your pocket. The Arc M1330 is however very lightweight, and you can simply fold in half and it can even fit in easily in deep jeans or jacket pocket. It is like a wallet in your pocket. And you do not need to carry any of the iPhone or Apple Watch chargers along – a massive relief. 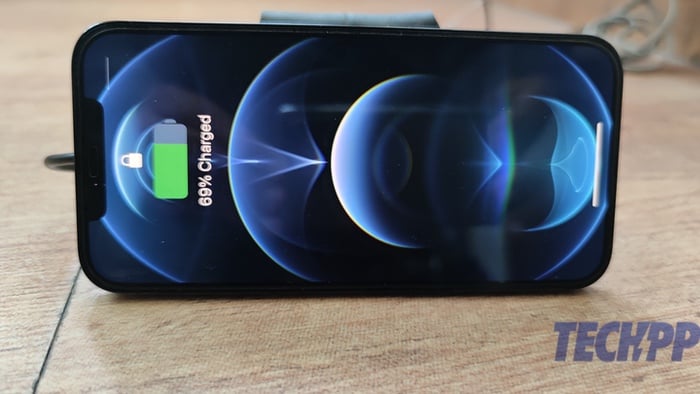 RAEGR has also added a few more design elements that add to the charger’s functionality. The back of the smartphone charging pad comes with a thin plastic strip that can be latched onto a hinge on the back of the Apple Watch charging pad. All you have to do is pull the strip out and fix it in the hinge and it will create a stand of sorts, allowing you to use your iPhone 12 series smartphone while charging wirelessly. This again is a major plus because, with most wireless chargers, you lose the ability to use the phone while charging. That said, this feature only works for iPhone 12 lineup because the phones come with MagSafe and hence they get magnetically attached to the charger, keeping them from falling when placed on a certain angle. A similar setup is present on the watch charging pad as well. The smaller grey square on the watch pad can be pulled up all the way to 90 degrees, giving you a different way to charge your watch as opposed to it laying flat on the mat.

…if a little flimsy 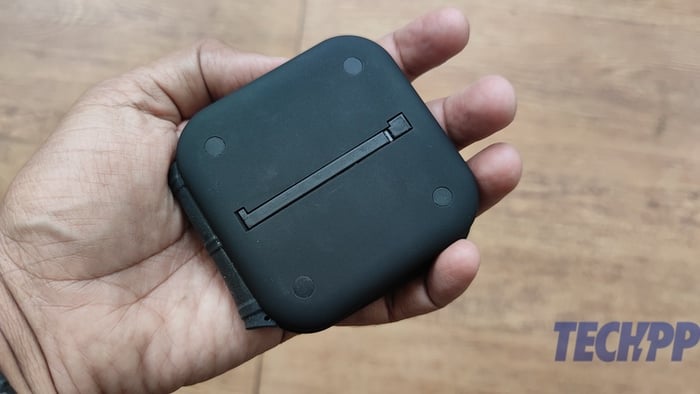 All of this makes it seem as if the Arc 1330 is a charger made in mobile heaven, right? Well, do not get too excited just yet. The Arc 1330 has its flaws and one of the biggest is its build quality. The Arc 1330 is priced at Rs. 2,999, which is not very light on the pocket, and yet looks like a product one can find in grey markets, because of its less than sleek finish. The small plastic strip on the back of the smartphone charging pad is so thin and flimsy that we were afraid to pull it out over and over, fearing it would snap just like that. The same is the case with the Apple Watch charging block. The pull-up part of the watch charging pad seems a little substandard and does not fit back into the pad very seamlessly. The stand mode is handy, but when the charger is being used in that mode, it seems very shaky indeed. 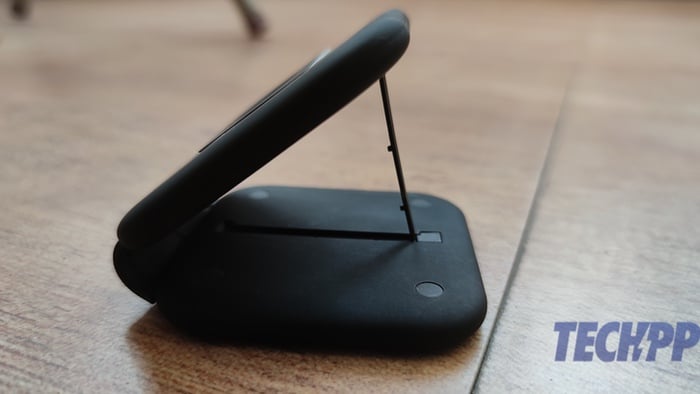 In terms of performance, the charger does well with iPhones with support for MagSafe, i.e, the iPhone 12 line up, as its name indicates (the “MagFix” bit). It is targeted at iPhone 12 lineup users and Apple product lineup users and there it gets the job done. Thanks to the MagSafe support, the phone gets magnetically attached to the charger and does not really move from its place unless you pull it off.

The story is not the same when it comes to phones without MagSafe, even the iPhones. We tried to charge our iPhone 11 on the pad and just placing the phone on the right spot where it would start charging the smartphone was such a task. If this was not a problem enough, we often found that the phone would stop getting charged ever so often for no apparent reason. A problem we never faced with our iPhone 12. We had the same issue with our AirPods cases. We tried charging both AirPods and AirPods Pro on the charger one after another and placing them at the right spot and then getting the charge flowing throughout seemed to be an issue. 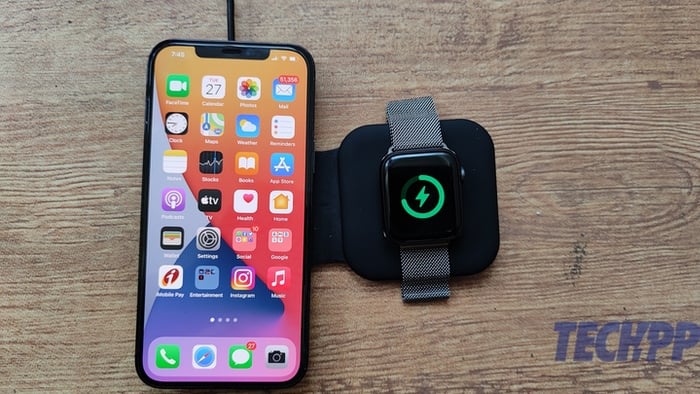 The charger comfortably takes more than two hours to get your phone charged and the speed slows down further when you are charging an Apple Watch and a smartphone simultaneously (there is no remarkable charging speed for the Apple Watch and AirPods which charge just as they normally would wirelessly). You also have to use the charger with a power adaptor with 20 W or above output for it to work at its proper speed – no, there is no adaptor in the box (there almost never is with chargers, so that is not an issue), although you do get a USB Type-C to USB cable in the box. And yes, before you ask, it works with a power bank although the charging speed depends on the output from it. RAEGR assures us that it is safe to use as well, and comes with “over-voltage, over-current, and over-temperature protection” and it gave us no problems in terms of performance.

A safe option for MagSafe devices 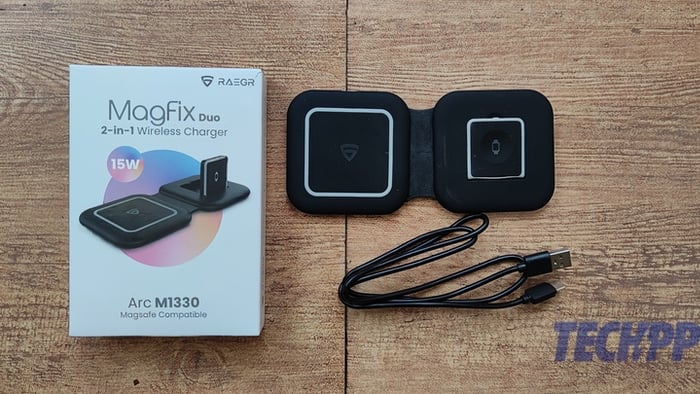 Priced at Rs. 2,999, the RAEGR MagFix Duo Arc 1330 brings a very portable 15W wireless power output, and the ability to charge two devices simultaneously, which is pretty good for the price. The wireless charger is aimed at iPhone 12 series users and is perfect for those also having an Apple Watch. Actually, if you do not have an Apple Watch, you can give this one a miss because one of the charging pads will be of no use to you whatsoever. The product has some design and performance flaws and devices without MagSafe support can be a little tricky to charge. And if you want crazy charging speeds and a super attractive design, we would advise you to give this one a miss.

But if you are looking for an extremely portable (make that pocketable), handy wireless charger for your iPhone 12 series device and Apple Watch or AirPods with a decent wireless charging speed, this could be a product for you. The RAEGR MagFix Duo Arc 1330 charges an iPhone 12 wirelessly as fast as Apple’s own MagSafe charger, folds up to fit in your pocket, and can save you from the hassle of carrying charging cables. It needs a bit of work, but it DOES provide a RAE(GR) of wireless charging hope.