Windows 10 Taskbar Not Working? Fix It With These Solutions

A taskbar is a GUI element on various computer operating systems such as Linux, macOS, and Windows. It can help you quickly launch apps, view the currently active apps, switch between the open apps, and do much more. 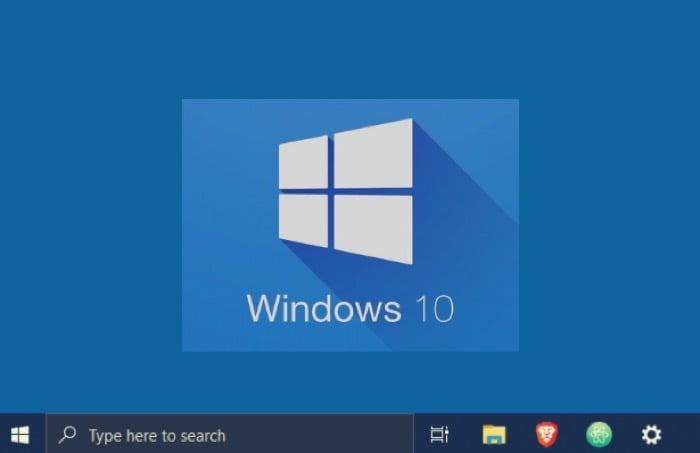 However, what functionality you get out of a taskbar depends entirely on its implementation on an operating system. Talking in context to Windows specifically, the taskbar serves an even broader purpose than basic multitasking: it brings along additional functionalities such as quick-access shortcuts, date-time view, easy-access notifications, and most importantly, the ability to personalize itself.

Despite its extensive functionality, though, there are times when the taskbar can start causing problems. Windows 10, in particular, is prone to numerous taskbar issues, which can sometimes render it completely unusable.

In this article, we will cover the following Windows 10 Taskbar issues:

How to Fix Windows 10 Taskbar Not Working?

Most taskbar issues on Windows arise due to the complicated nature of the taskbar itself. Windows 10 taskbar, specifically, is known to be peculiarly notorious in this regard compared to other operating systems. As a result, you often see Windows 10 users complaining about issues like a frozen/unresponsive taskbar, unclickable taskbar, problems with pinning apps, missing app icons, and the malfunctioning of the auto-hide feature, to name a few.

If you are faced with similar (or some other) taskbar problems on your computer, the following are the fixes for all kinds of taskbar issues on Windows 10. 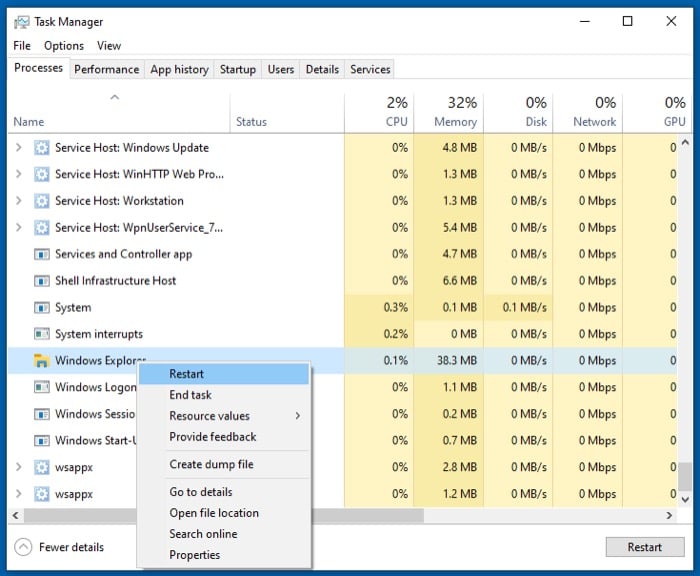 Windows Explorer should now restart, and your taskbar should be functional again.

Although restarting Windows Explorer fixes most taskbar issues on Windows 10, in case it fails to do so in your case, the next fix to resolve the taskbar issue is to declutter your taskbar. You see, if you look carefully at your taskbar, you may find various elements on it that you do not necessarily use in an everyday scenario, occupying space unnecessarily and slowing down the loading times.

Elements such as the Cortana search box, task view, and quick actions can clutter your taskbar, not to mention unused apps, which may also occupy too much space.

To clear such unrequired elements from your taskbar:

i. Right-click on a blank space in the taskbar.
ii. Untick the elements on the menu that you do not use or want to see anymore.

Lastly, for items, such as the toolbar, use the following steps to clear unrequired elements:

i. Right-click on the taskbar.
ii. Hover over Toolbars and untick the items you do not want in the toolbar. 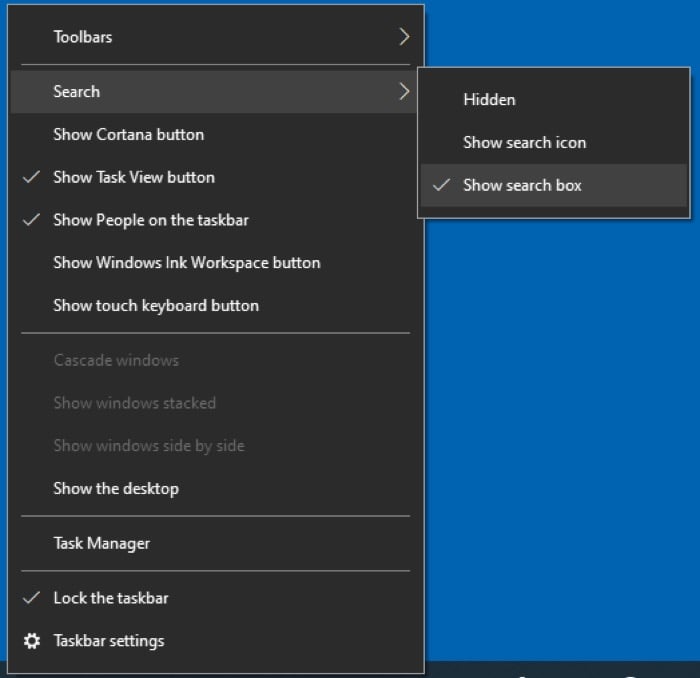 i. Go to Settings > System > Notifications & action.
ii. Click on Edit your quick actions.
iii. Unpin the items that you do not use to remove them from the quick actions menu.

An unlocked taskbar on your computer can sometimes cause unusual taskbar behaviors. For instance, suppose you want to perform a taskbar action. You click on it to bring up menus or options, only to realize that your click has caused the taskbar to move or resize.

If this is the case with your Windows 10 taskbar, you can simply click on it and move it back to its default position.

Similarly, to resize it back to the default size, position the mouse cursor on the edge of the taskbar until it changes into a short vertical arrow and drag it up or down to change its size.

Much like the unlocked taskbar, if you have the auto-hide taskbar feature enabled on your Windows 10 computer, you may experience some odd taskbar issues.

Although the auto-hide feature should ideally hide and display your system’s taskbar when you hover over the bottom portion of the screen, it can sometimes cause the taskbar to freeze or not display at all. If this is happening with you, you should probably disable the auto-hide feature.

i. Right-click on an empty space in the taskbar and select Taskbar settings.
ii. Toggle off the button next to Automatically hide the taskbar in desktop mode to disable the auto-hide feature.

5. Update the System to the Latest Software

Software updates can sometimes bring along a few bugs with them, which can break the functioning of some of the components of the operating system. In the past, several Windows 10 users have complained about similar issues on their system that rendered their taskbar and start menu unusable.

To ensure this is not the cause of your problem, check to see if there is a new software update for your system and update your computer to the latest version.

i. Go to Settings > Update & Security > Windows Update.
ii. Click on the Check for updates button. If an update is available, it should start downloading automatically, and you can then install it on your system.

If no new software update is available and you take frequent backups of your machine, you can restore your system to the previous restore point.

i. Press Windows + X and select System.
ii. In the Find a setting search bar, search for “restore point”.
iii. On the System Properties window, click on the System Protection tab. 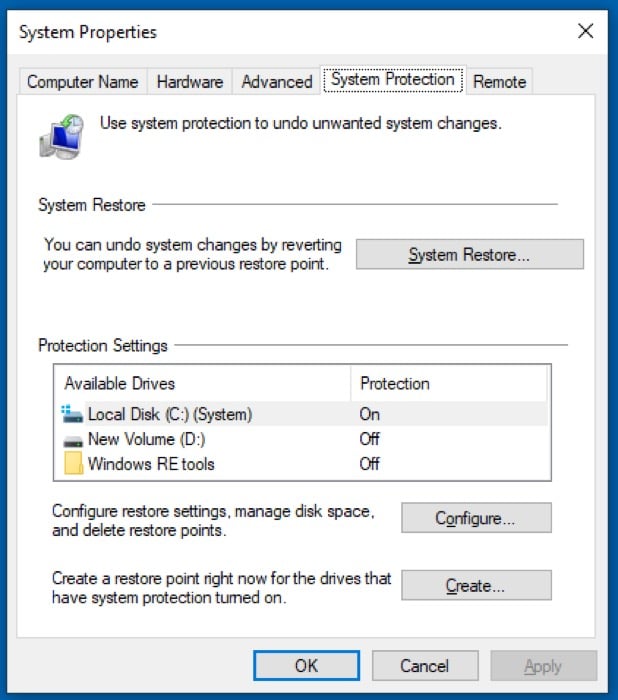 iv. Hit the System Restore button.
v. Follow the on-screen instructions and select the date from which you want to restore your computer.
vi. Finally, click Finish.

If none of the fixes listed so far work out, rebooting your computer is a potential basic yet effective fix to your taskbar issue. Doing so flushes out the RAM and other temporary files and processes, which could be one of the reasons behind an unresponsive/broken taskbar.

To restart your Windows 10 machine:

i. Click Start and hit the Power button in the bottom left.
ii. Tap on Restart from the list of options in the context menu. Alternatively, you can also shut down your PC and restart it manually if you want.

7. Re-register Apps on the System

The taskbar on Windows 10 can occasionally become unresponsive or unstable if it gets deregistered or an app on your system goes rogue — does not start, keeps crashing, or is frozen.

To fix this, you can reg-register all apps on your system, including the one responsible for managing the taskbar.

To re-register apps on Windows 10:

i. Press Windows + X and select PowerShell from the menu.
ii. In the PowerShell window, enter the following command and hit Enter:
Get-AppXPackage -AllUsers | Foreach {Add-AppxPackage -DisableDevelopmentMode -Register “$($_.InstallLocation)\AppXManifest.xml”}
iii. Once the command gets executed, restart your computer.

8. Scan Your Computer for Malware/Virus

Despite not always being the case, your system’s strange and erratic behavior may sometimes point to the presence of malware. If you do not already have antivirus software on your computer and its firewall protection is not strong either, malicious files could be a possible cause for taskbar issues in some instances. Hence, we recommend installing a good antivirus on your system and using it to scan your system for any potential threats.

If you do have an antivirus on your system, however, but it has not warned you of any threats, open it and perform a full/deep system scan of your PC to ensure that your system is safe and healthy.

9. Use SFC to Fix Corrupt/Modified Files

If, after all the fixes so far, the taskbar on your system refuses to get fixed, it could probably be because of some corrupted system files, and therefore, the next fix to resolve the taskbar problem is to use SFC for fixing such issues.

SFC or System File Checker is a system tool to scan and repair system files on your Windows computer. It automatically checks your system for corrupted/modified files and replaces them with the original (correct) version of the file.

10. Use DISM to Fix System Files

While SFC manages to fix most of the corrupted/modified file issues on Windows, it cannot do the same for system files. In this case, you need a more powerful diagnostic tool like DISM.

DISM or Deployment Image Servicing and Management is a command-line tool that enables you to modify and repair system images.

i. Hit Windows + X shortcut and select Command Prompt (Admin) from the menu.
ii. Enter the following command in the command prompt window: dism.exe /Online /Cleanup-image /ScanHealth, and hit Enter.
iii. If DISM finds a problem on your system, type dism.exe /Online /Cleanup-image /RestoreHealth, and press Enter to repair the scanned issues on the system.

So you complained about the “Windows 10 Taskbar not responding”? Well, it should be working now! Just in case it still doesn’t work, you can consider creating a new user account. A lot of people suggest creating a new user account as an easy option as it fixes issues like corrupt system files, but this isn’t ideal for most cases since you’d need to set up everything from scratch. Use it as the very last option.

With the help of the fixes listed above, you should be able to fix most of the taskbar-related issues on Windows 10 and make your taskbar functional again. All of the fixes we have mentioned in this guide are tried and tested solutions recommended on various forums and websites, including Microsoft’s own community. So, unless there is a really obscure problem with your system, these should fix most of your taskbar issues.

That said, though, if you still continue to face taskbar problems on your computer, you can try resetting your PC to remove everything on it and have a clean Windows 10 reinstall. However, if you are not comfortable doing that, your safest bet is to connect with your laptop manufacturer’s support team to get a resolution.

How to Change the Windows 11 Taskbar Size
Read Next