The mid-segment of the Indian smartphone market – that belt that roughly lies between Rs 10,000 – 30,000, with different tiers of its own – is best known for its price to spec ratio battles. You do get some remarkably powerful devices here (the Poco X3 Pro, the Mi 11X, the OnePlus Nord 2), but it is safe to say that in most cases, design tends to take a bit of a back seat. 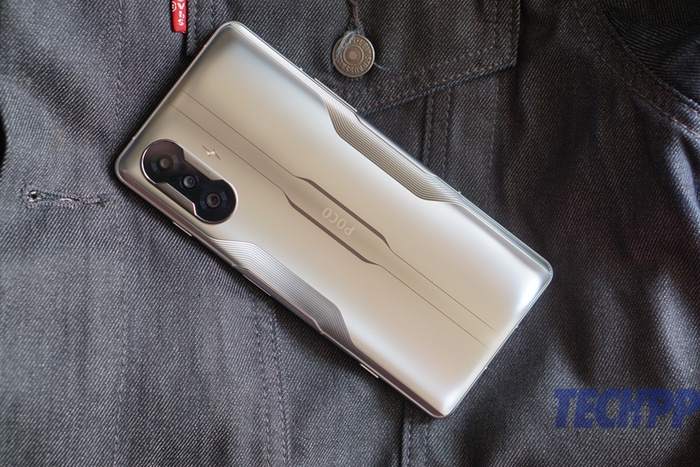 You will have some very smart-looking phones out there, and there will even be the odd flash of innovation, but by and large, the stress is more on the spec readout than the design feel. So you will often end up with plastic backs and frames (not that we mind either, as long as they last), and even when you do get glass on front and back, the effect is more towards being smart rather than spectacular.

Yes, we know the talk has been about its amazing price (starts at Rs 26,999) and its very good spec sheet spearheaded by a MediaTek Dimensity 1200 chip and a 6.67-inch 10-bit Turbo AMOLED full HD+ display with a 120 Hz refresh rate. There is lots of RAM to spare, a triple camera arrangement on the back with a 64-megapixel main sensor, and a large 5065 mAh battery with a very fast 67 W charger (in the box). And yes, it has triggers on the side that pop up when you hit a slider for a better gaming experience. 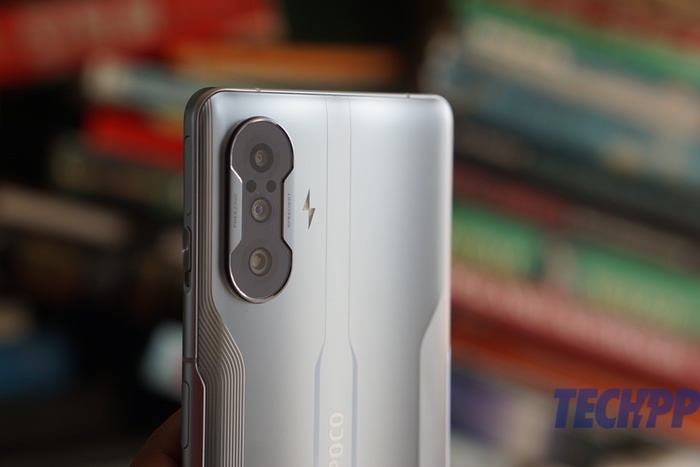 All that is very impressive. And innovative. And in some cases, first of kind and whatnot.
I say: forget that all.

In simple terms, I do not think the mid-segment has ever seen a device with this premium a design for quite a while. Yes, Gorilla Glass on the back and front and ye, a metal frame. But that is not really what makes the Poco F3 GT’s design different. No, this is a phone that will literally turn heads because there is nothing quite like it. The only trace of design normalcy about the phone is in that tall bezel-less front, which has that AMOLED display and punch hole notch in the center. Move away from it, and design madness takes over. 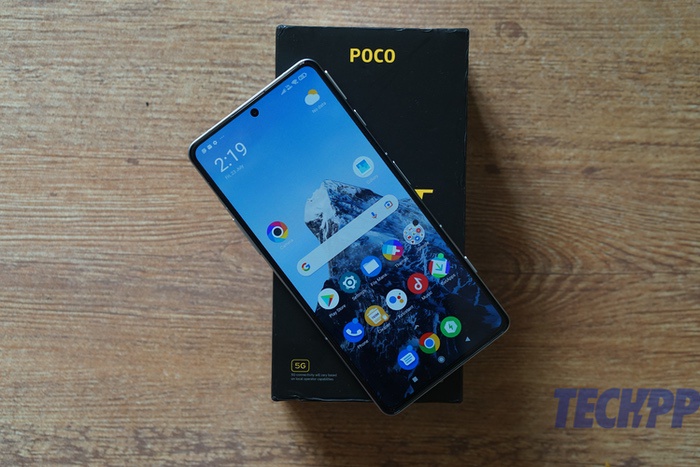 The Poco F3 GT has a level of detail rarely seen in smartphones. Most smartphones have been tending towards the minimalistic of late, with only the large camera lenses and their placement pattern at the back grabbing attention, although some brands, Poco included, have added massive logos to the mix as well, and then there is the super-niche gaming. Well, the Poco F3 GT has design elements scattered all over the back and the sides – some in your face, some standard, and some subtle. But there is a crazy level of design activity going on in this device.

Engraving gone crazy, sides that curve and flatten out (“Freezing Speediest” too) 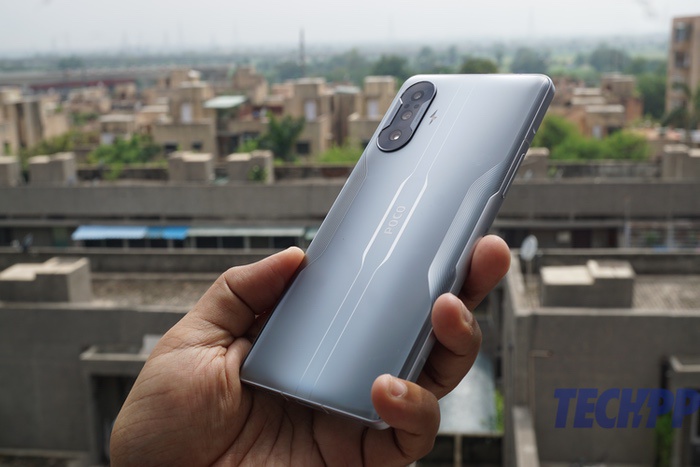 We got the Gunmetal Grey variant, and it shone literally like silver in the sun and glowed gently in the shade. The back is glass but looks like metal, the metal of which it is almost as if an engraver has gone crazy. There are layers of stripes on the back whose level of glow changes depending on how the light falls on them, the Poco logo itself in the center between two largely parallel vertical lines on the back that split a little further to accommodate that.

The camera unit has straight sides and a curved top and lower part, and two of the sides intrude a little inwards towards the lenses to give it a feel of resembling a figure of 8. What’s more, there is lighting around the camera unit, so it can actually glow at times. Take a closer look at those sides that jut into the camera lens space, and you will find the words “freezing speediest” on them (make of that what you will). Oh, and right next to the camera unit is the flash. Yes, it is in the shape of a bolt of lightning – a flash, get it? 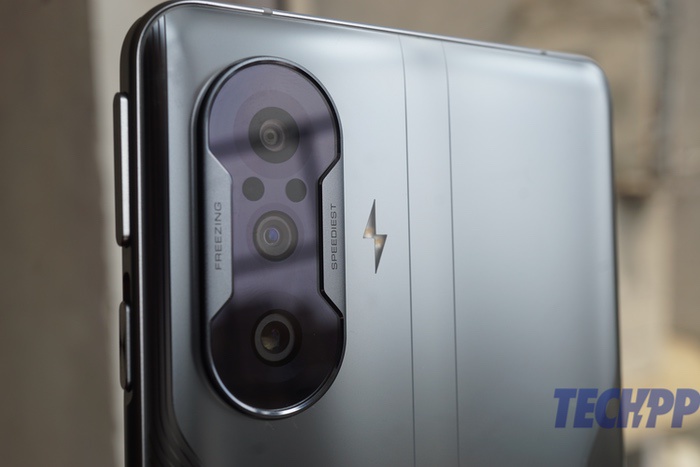 Yes, that is a lot of design wizardry but put this phone face down on a table, and the stares will never stop. In a nice way.

There is artistry on the sides too. The left side has the volume rocker, which is unusual for Poco devices, but you will notice that the top and lower portions of the side are flat while the middle is slightly more rounded. The flatter areas are to give you a better grip on the phone when you are using it in landscape mode for gaming or viewing content. It is a very subtle change in shape and does not make the phone look odd – in fact, you will notice it only when you look at the phone very closely.

The right side, of course, has the most promoted aspect of the phone – the triggers that pop up when you sliders next to them. The sliders are textured differently (so you can feel them in the dark), jut out just a little, and have different textures, and well, when they are “switched on”, the empty space next to them is orange (it is silver when they are off). The triggers themselves are a little plain but wonderfully solid, with a nice clicky feel to them. 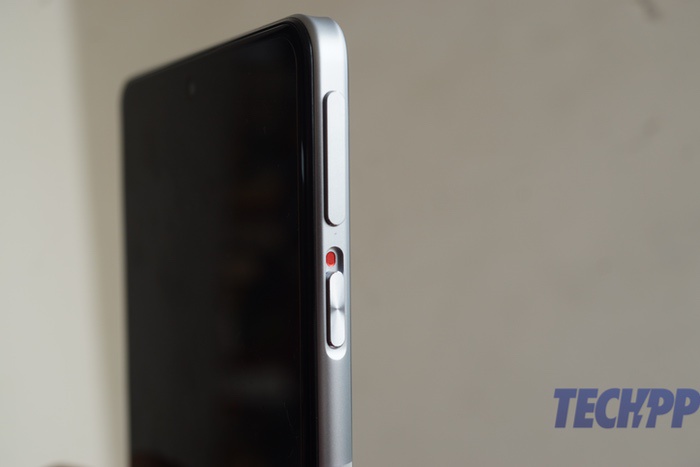 After all this, a normal power button that doubles up as a fingerprint scanner and a top and a base that house speakers, SIM card slots, and a USB Type-C port almost seem embarrassingly normal and routine. Like that display. It is not as if they are bad. No, they are smart enough, but it is almost as if they are islets of sanity in an ocean of design madness. That said, the speaker grilles on the top and the base are in shapes of the letter L!

Looks really premium…and that is rare

I will repeat: we do not think we have seen a design like this in this price segment before. Yes, the Realme X series and the Redmi K20 series had their flashy moments, and the Mi 11 Lite brought classy slimness to the sub-Rs 30000 segment, but the Poco F3 GT is class on another level. There is no other way of putting it. The quality of finish and the materials used to get it right into the premium segment in terms of design. Remove the spec sheet, and you could slap a much higher price tag on it without anyone blinking in surprise. 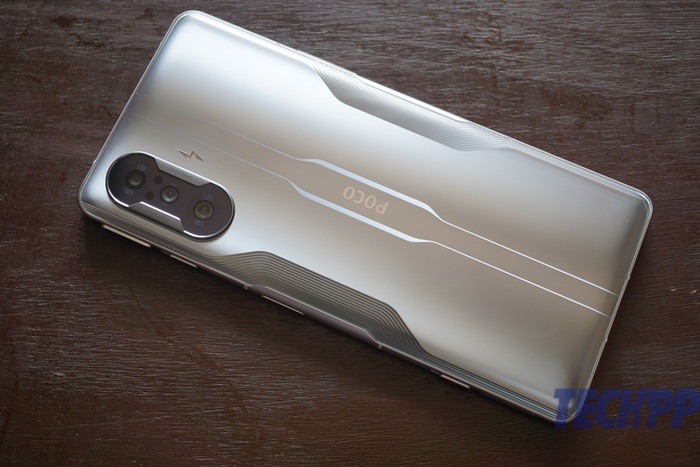 It is unabashedly upper (or premium as they call it nowadays) mid-segment in terms of specs and price, but the Poco F3 GT just brought the premium level design to the mid-segment. Yes, we are going to be looking at its performance in our detailed review.

Right now, however, we are just busy looking at it. And it has been a while since we said that about a phone that is priced below Rs 30,000.

Was this article helpful?
YesNo
TechPP is supported by our audience. We may earn affiliate commissions from buying links on this site.
Read Next
Nothing like anything: Phone (1) has brought a design edge to the mid-segment
#Design #First Cut #Poco #Poco F3 GT