Can it get creepier than this? An app for your Android phones which can identify people and even shows which social sites they’re signed up for, and links to their profiles.

How many times have you failed to recognize someone at a conference or a party? How many times do you fail to associate a name to a face? If Recognizr is all that it is projected to be, then it can be the solution to both the problems above. 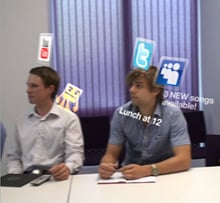 The app works by matching the most distinctive features of the face: the eyes, nose and chin. Face recognition software creates a 3-D model of the person’s mug and sends it across a server where it’s matched with an identity in the database. A cloud server conducts the facial recognition since and sends back the subject’s name as well as links to any social networking sites the person has provided access to.

It is actually not as creepy as it sounds. It only works if the person you’re looking at is also signed up for Recognizr. That is a drawback as well as a boon, drawback for all those who fail to remember faces, but boon for those who craves for privacy. To set up an account, simply take a picture of yourself with the Recognizr app and then set your associated sites by dragging icons onto your face. You can share as little or as much as you desire, and people will only see what you choose to share

As of now, Recognizr is still a prototype, so it will be a month or two before we can have a hands-on check with this cool ‘James Bond’ feature like app. iPhone users may also get a version of Recognizr, as the Polar Rose algorithms can run on both the iPhone and Android operating systems. For now enjoy the video demo

Was this article helpful?
YesNo
TechPP is supported by our audience. We may earn affiliate commissions from buying links on this site.
Read Next
NothingOS Made Me Realise How Much Overrated Pixel UI Is
#android #android app #augmented reality #facial recognition