As we wait for the mini iPad rumor to become reality or not, more middle-sized tablets appear on the market. The most prominent of all was, without any doubt, the Nexus 7 tablet released by Google in partnership with Asus. Soon after that, Samsung updated its Galaxy Tab 2.0 with a Student Edition version for the 7 inch size, thus directly competing with Google’s slate. Now, it seems that it is the turn of Huawei, as they’ve officially announced the MediaPad 7 Lite tablet.

The limit between tablets and smartphones is a very thin line, and the recent launch of the Galaxy Note 2 comes to prove that the already big display of the first Galaxy Note was not a hindrance to release an even bigger phablet. In the end, what we’ll get will be a wide diversity of smatphone and tablet sizes, and for Android users, it might further worsen fragmentation issues.

Right from the beginning, some users could simply opt for the Nexus 7 tablet, exactly because it is made by Google and Asus and because they trust the brand. Indeed, many users are very happy and content with the Nexus line of smartphones that Google has released so far. Chromebooks, another product launched by Google, also seem a worthy product, but towards a specialized niche. We are going to put the features and specifications at battle and you’ll be the final judge.

You already know that these 2 tablets have the same size – 7 inch. The full name of Huawei’s mid sized tablet is Huawei MediaPad 7 Lite which should tell something about its features. Thus, it only comes with a single-core 1.2GHz chip and 1GB of RAM. Nexus 7, on 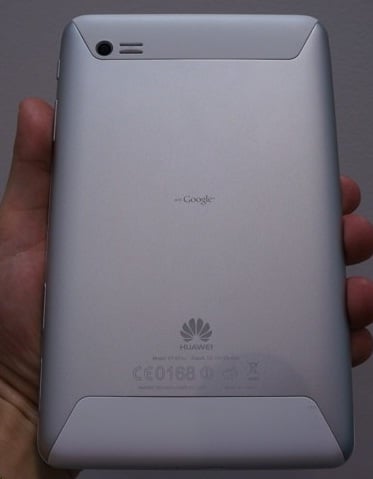 the other hand, has Nvidia Tegra 3 quad-core processor. But Huawei’s MediaPad has something that Google’s Nexus tablet lacks, and that seems to be quite important – 3G connectivity. MediaPad 7 Lite also has Wi-Fi in place, so you won’t be relying only on the 3G broadband option.

Nexus has 198.5 x 120x 10.5 mm and weighs 340g while Huawei MediaPad 7 Lite has 193 x 120 x 11mm and weighs 370g. For an untrained eye, the overall shape of the two tablets is quite similar. Google and Asus have opted for a rubberised, textured coating for the back side whereas Huawei decided to encase the MediaPad 7 inside an aluminium unibody that has some small rubber grips at both ends of the tablet.

The basic on-board storage of both tablets is at 8GB but you can enhance it on the MediaPad 7 using the microSD card slot to as much as 32 GB. The 16 GB model for Nexus 7 is not yet available in the store, so, at the moment, the MediaPad seems to have a slight advantage here. MediaPad 7’s battery is 4100mAh, which is a little under Nexus 7’s 4325 one, so we should expect the Nexus 7 to have a longer battery lifespan but when you take into account that MediaPad has a weaker processor, the battery should fare better for MediaPad.

Albeit they have the same screen size, the Nexus 7 wins here with a better resolution: 1280 x 800 pixels opposed to 1024 x 600 pixels, this means a pixel density of 216 ppi opposed to 170 ppi. Nexus 7 has also proximity sensor and scratch-resistant glass, and we know how important it is to have glass that has at least some sort of protection. On the other hand, the Nexus 7 has only a 1.2 MP front facing camer while MediaPad 7 Lite has a rear 3.2MP one and a  front 0.3MP one (useless to me).

Because it was released earlier, the Nexus 7 comes with the latest version of Android Jelly Bean. MediaPad Lite 7 also comes out of the box with Android 4.0. MediaPad Lite has its own Android “skinning” version, so once more reviews will come in, we will be able to say 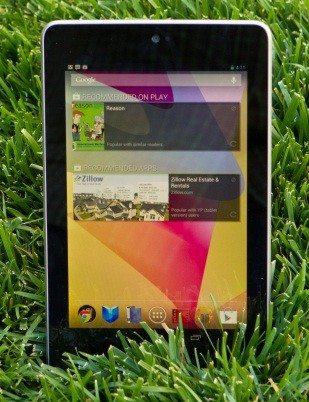 for sure whether their own customization of Android makes it faster or sloppier.  Another interesting detail that gets overlooked by many when a tablet or smartphone is launched is the type of files that the device supports.

For example, I didn’t even know that Nexus 7 doesn’t play .avi files. The Nexus 7 supports .mp3 music formats and MPEG4, H.263, H.264 video formats. For an avid film fan, it is very important that my tablet supports all the movie types that I can get, even MKV ones. MediaPad Lite 7 is much more impressive on this chapter, as it supports the following file types:

Interesting to know that the MediaPad Lite 7 also has a loud speaker, again, another feature that will be appreciated by music and movie lovers. It doesn’t feature NFC like Nexus 7, so for those that look for contactless interaction, Huawei’s Lite tablet will let you down. MediaPad also still supports flash while browsing while that is dead on the Nexus 7.

As in many cases, there’s no real winner. Some might need to get that extra-power that the Nexus 7 has, while others (like me) are really looking forward to be able to see the movies that they want and not be troubled by incompatibilities between supported file formats. Also, if you think you can take pictures with a tablet’s camera, then the MediaPad is a better choice. But, if the price for the MediaPad will be right, and by that I mean, lower than Nexus 7’s (170-180$ would be an awesome price for it), then it might prove to be a mid-sized tablet to consider buying.