In an unexpected move, Apple CEO, Tim Cook has written an open letter apologising his customers for all the mess created by the new Maps app in iOS 6.

With the launch of our new Maps last week, we fell short on this commitment. We are extremely sorry for the frustration this has caused our customers and we are doing everything we can to make Maps better.

There has been a relentless backlash by users across the world ever since Apple released the iOS 6 update last week. Many users were unaware that Google Maps has been removed and replaced with Apple’s own mapping solution, after talks between the two companies failed to elongate the maps deal any further. Within a week of its release, more than 100 million users updated their iDevices to the latest iOS 6 operating system, which shipped with the half-baked Apple Maps. 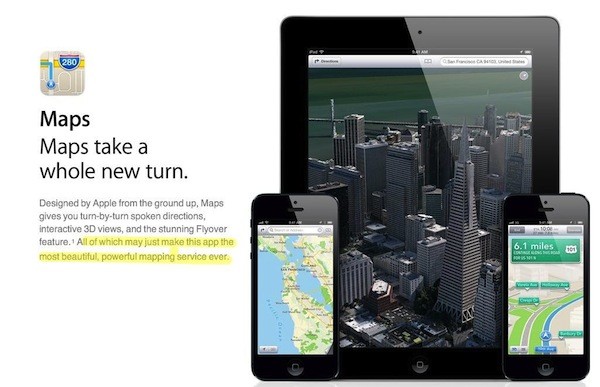 Earlier this week, I had analysed how Apple could’ve avoided the wrath of their users for their maps switch. They failed to let users know of the limitations in the first version of their own maps app. At WWDC 2012, they had demoed the app to be near flawless with beautiful 3D maps with flyover, turn-by-turn navigation, voice integration and more. Clearly, they fell short of user expectations.

Partly, the negligence to ship a half-baked product has to do something with how people accepted and glorified Siri. Yes, Siri was announced in beta (it still is) and hardly had a worthy competitor, but it just didn’t work well outside a few countries. But people still went ahead and bought iPhone 4S in anticipation of Siri becoming usable in the near future. They just saw potential in Siri and gave Apple the leeway to ship a beta app as their USP. Maybe, Apple thought that would be the case with Maps as well. But they were so wrong. One, they didn’t release Maps app in beta, and two, there are many better competition in this space.

Tim Cook was not just humble enough to apologise deeply for the maps mess, but was gracious enough to suggest alternatives for his customers.

While we’re improving Maps, you can try alternatives by downloading map apps from the App Store like Bing, MapQuest and Waze, or use Google or Nokia maps by going to their websites and creating an icon on your home screen to their web app.

This should earn some brownie pies from many of his disgruntled customers. It’s not that people were unaware of the alternatives, but it’s always nice to see the company CEO owning up the mistakes and bad decisions without mincing words.

It’s no easy task to build a new mapping solution. Apple might had underestimated the efforts needed, but they clearly knew that they need users to use their app more and more in order for Apple maps to get better and better. But can they expect their users to help them out? Some would say, that’s exactly how Google approached the maps. They gave away Google maps for free on web and mobile devices, and in turn, the users helped them to better their product.

Sadly, Apple doesn’t have this luxury. Apple is no Google. Unlike Google, who is a freemium company, Apple is a premium company. Apple charges a premium amount for their products and users rightfully expect a premium experience out of them. Rather than banking on users’ largesse, Apple should take a plunge into their huge cash reserves and start acquiring more companies in Mapping sector. They already have a few smaller ones in their kitty, but now, they should be looking for some big fish.

Expect some major acquisitions (or deals) in the near future.

Was this article helpful?
YesNo
Photo Credits: @labnol
TechPP is supported by our audience. We may earn affiliate commissions from buying links on this site.
Read Next
With Football Manager 2023 Touch, Apple Arcade finally has its “killer ...
#apple #Apple Maps