Recently, it looks like everyone is releasing new products, better and more powerful than their predecessors, both in software terms and in hardware. Microsoft has released the new Windows 8, along with some great new Windows 8 devices, Apple has released iOS 6 that comes on the 4th Gen iPad and the new iPhone 5, Google gave us the Android 4.2 Jelly Bean that is installed on the Nexus smartphone and tablet produced by LG and Samsung. The times are changing, as Bob Dylan’s song goes.

Until recently, Samsung had the most powerful smartphone on the market, the all mighty Galaxy S 3. A smartphone that came with a heap of great advancements and awesome features. But, as recent events showed us, the reign of the SGS is coming to an end. The other manufacturers are developing smartphones that can threaten the throne of the SGS 3, and the two most prominent of them are the iPhone 5 and the LG Nexus 4. 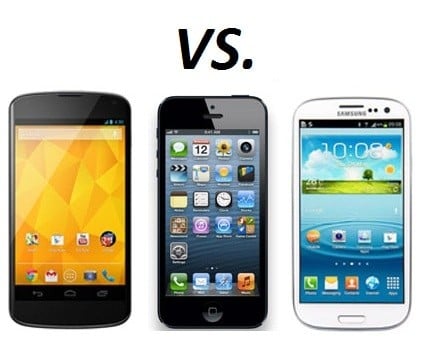 And because these three devices are at the “top of the food chain” of smartphones, we decided it would be a good idea to put them head to head and to see which of them is the best smartphone out there. Each of them has their own strengths and weaknesses, awesome features and lots of power under their lids. The battle will definitely be a close one, but regardless of which of them will look best on paper, the final decision on which of them is the best comes to each and everyone of you.

When it comes to the display, there are a few aspects to factor in. First, is the size of the screen, then you should look at the resolution, and last but not least, the pixel density. In the case of our three competitors, the LG Nexus 4 has a 4.7-inch IPS display with Corning Gorilla Glass 2; and a resolution of 1280×768 pixels with a pixel density of 320ppi, the iPhone 5 has a 4-inch Retina Display with a resolution of 1136×640 pixels that has a pixel density of 326 ppi and the largest screen of them all, the SGS 3 packs a 4.8-inch HD Super AMOLED display with a 1280×720 pixels display and a 306 ppi pixel density.

Winner: If you are interested in size, the SGS3 has the upper hand, but when it comes to crispness and picture quality, the iPhone is still top dog.

Each of these phones have two great cameras, and they are almost evenly matched. The two droids have basically the same layout on the back, a 8MP camera, shooting full HD 1080p video , the difference is that the SGS3 has a 1.9 MP front facing camera, capable of shooting 720p video and the LG Nexus 4 has only 1.3 MP, but still very much capable of HD filming at 720p. The iPhone however, has the same 8 MP camera on the back, but it loses some points for its front facing camera, that has only 1.2 MP, but it is still capable of filming 720p video. Too bad we couldn’t include the Nokia Lumia 920 here, as it currently sports some innovative photo-taking features. 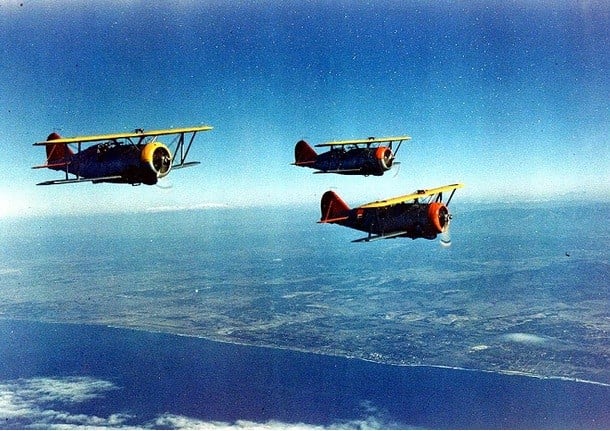 In the performance sector, all of these smartphones are performing great, they have awesome tech inside them and they work at blazing speeds. The differences come when we look at the numbers: both the SGS3 and the Nexus have quad core 1.5 GHz CPUs with dedicated GPU chips, while the iPhone 5 has only a Dual Core A6 chip. Also, both droids come with 2GB of RAM memory. Of course, this would seem as a drawback of the Apple smartphone, but in real life use, you might be surprised at how well it performs. So do not be quick to judge it, but instead, try it out before you make a decision.

Winner: Tie between LG Nexus 4 and SGS3, if you just factor in the specs, but real-life scenarios can sometimes favor the iPhone.

From the battery life point of view, these devices are pretty much equal. Tossing out the window what their manufacturers claim, they each have enough juice to keep running about 8 hours of talk time. So, at least from this regard, you do not have much to worry about. The Stand by time of the battery is however longer for the iPhone, this is because the AMOLED display of the droids are bigger battery hogs, and of course, their quad-core CPUs will eat up more power. 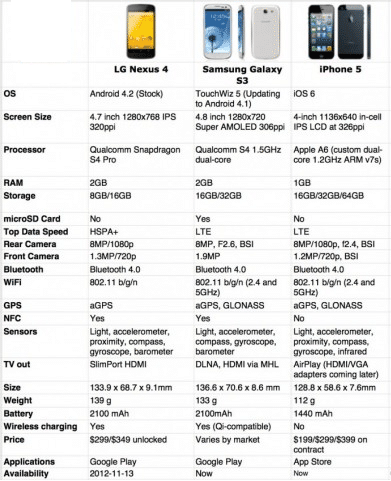 If awesome features is what you are looking for, then all of these devices have something to offer. Although, the Android brothers have some extra features, such as NFC and working maps. All of these devices have virtual assistants, the iPhone 5 has the already well know Siri, while the SGS3 has S Voice and Nexus 4 has Google Now. Also, the SGS 3 has the wireless charging and Smart Eye feature. Google has been smart enough to launch Nexus 4 with a wireless charging “orb”, very much ressembling HP’s Touchstone.

The storage that the smartphone offers is also very important, and all these devices have plenty. However, the iPhone 5 and the LG Nexus 4 do not support SD which is a big drawback. The Nexus 4 comes in 8GB and 16GB while the iPhone has 16GB, 32GB and 64GB versions. The SGS3 offers users 16, 32 and 64GB storage, which is expandable via an SD card with another maximum of 32GB.

In terms of connectivity, all of them offer pretty much anything you could ever want. Only the iPhone lacks the NFC connectivity (but it has Passbook), but that’s about it. Physical connectors are what you would expect on such devices, data connection (micro USB for the droids and Lightning for the iPhone 5), Video out and 3.5 mm headphone Jack

Winner: Tie between SGS3 and LG Nexus 4 for features, SGS3 for Storage and tie again for the droids for connectivity.

The aspect is something everyone sees in different eyes. The design of the three differs, the dimensions differ, but they all have their own unique look and feel. While the SGS3 has a more cheap-plasticky feel, the iPhone 5 feels more like a jewel in your hands. On the other hand, the external aspect of the SGS3 is much better than the other two (at least this is how I see it).

The price of each device is a very important factor in your decision. Apple is selling its new toy for $199, $299, or $399 depending on the storage version you opt for, the Nexus 4 at $299 and $349, for the 8GB and 16GB versions and the SGS3 hovers around the $400 mark, but it widely varies from carrier to carrier and from store to store. Now, these prices give you an idea of how much each of them costs, but what is the most important question here is how much are they worth to you?

Although these numbers are important, and it is very important to first do some research before buying a smartphone, you should always go for the one that feels the most natural for you. Try them all out and see which phone is best for you, what OS has the best features for you and, above all, which one offers you the best experience.

Was this article helpful?
YesNo
Photo Credits: iMore
TechPP is supported by our audience. We may earn affiliate commissions from buying links on this site.
Read Next
Snapdragon 782G vs Snapdragon 778G Plus: What Has Changed?
#comparison #iphone 5 #lg nexus 4 #Samsung Galaxy S3