Chameleon OS Android ROM Customizes Your Phone Like no Other

One of the main reasons I chose Android was the ability to customize the user interface, device settings and pretty much the operating system itself, without having to worry too much about security and other stuff like that. Android successfully delivered a certain amount of openness that frankly, lacked in iOS (even after jailbreaking).

Of course, as any other curious user, throughout time I’ve searched for deeper ways to dissect the system and change settings so I could finally call that smartphone mine. I’ve first started with CyanogenMod and a couple of other interesting ROMs but just recently, I’ve learned about Chameleon OS, a skin that certainly lives up to its name.

Chameleon OS – MIUI at its best 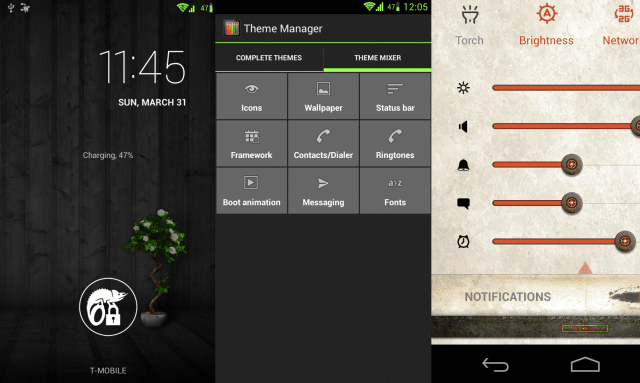 MIUI, also known as Me You I, is a highly customizable Android-based system built by Xiaomi Tech, the company who also released two interesting phones, MiOne and MiTwo. Based in China, MIUI first started as a heavily modified user interface originated from Android 2.3 Gingerbread, which has been compared in several occasions to iOS and Samsung TouchWiz, for its simplistic appearance.

Since its initial launch, MIUI has been weekly updated by the Chinese team and adopted by several users, especially from Asia. When it found its way across the ocean, several developers united to translate the custom ROM and release it, in unofficial versions. Although it’s not such a popular implementation, MIUI has always been praised for its high level of customization.

ChaOS ROM (short for Chameleon OS) is actually based on CyanogenMOD, another highly-known Android custom ROM. In a few words, our tricky little fellow focuses on each and every aspect of the system, with a special appeal for the theme engine. For example, users are given the possibility of tweaking the launcher with so many options, such as home screen previews, folders sorting and folder icon styles, that even dedicated 3rd party launchers would have a thing or two to learn.

Marketed as “An Android ROM like no other”, Chameleon manages to impress more and more users each day, even though it’s in an open beta phase at the moment, with a lot of features still being tested. Here’s a complete round-up of what’s working at the moment:

Apart all of these, ChaOS ROM is an open-source system, which will be further improved by suggestions submitted by worldwide developers and anxious users, such as those reading these lines. So, if you deem yourself a true customizer, flash ChaOS ROM and take it for a spin. Oh, almost forgot. The official variant only works with a limited list of smartphones. Also, have a look at the video below to see it in action.

Post on Instagram from Your PC or Mac, Almost Like Your…
Best Android Apps to Clone Other Apps and Run Multiple…
Realme 3i Review: A 'Real' Headache for Other Budget Phones
Rivals? Yes, but Realme and Redmi are Actually Not Hurting…
If Apple is the master of hype, why aren't other brands…
How to Batch Rename Images (or other Files) on Windows