When using a computer for work or for personal use, the desktop space can become overcrowded, especially for those that like multitasking. Did you ever consider doubling your space by adding another monitor? In spite of the fact that you will pay extra for another monitor, it will be worth every penny. 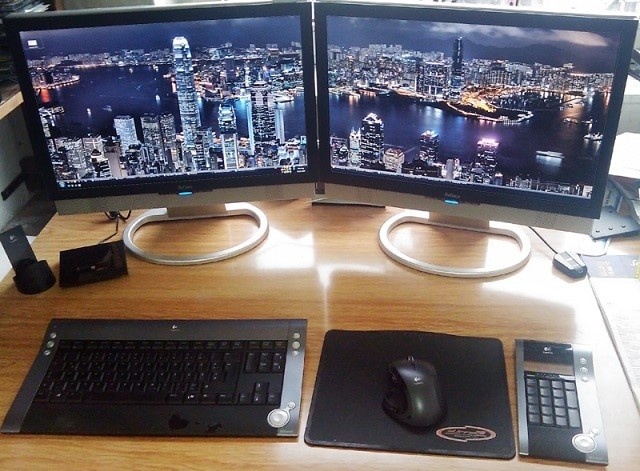 An extra monitor will increase your workflow and even more; it will ease a lot of basic operations and improve productivity in great percentages. In the following lines, we will present how to set up an extra monitor on your Windows, Mac OS X or Linux computer and the advantages that come with this.

How to work with a dual monitor system and its benefits

Pairing two monitors at the same station represents the use of multiple display devices in order to obtain a bigger surface available for applications on a single computer. They can be connected through different ports from the installed video card on your computer, either with the analogic signal, which has the VGA port and S-Video or with the digital signal, which has DVI and HDMI.

Further in this article, we will present the advantages of using two monitors instead of one, so stay along and read the following five major benefits which come with the addition of an extra screen.

1. Drag and drop/Cut and paste

Shorten the time and moves necessary to do the drag and drop operation. Usually, you have to adjust by measuring the folder windows to be able to make the operation, but in this case, with two monitors, everything would be easier because you can place one folder on the first monitor and the other on the second monitor.

The same thing can be done when you have to copy text from one word file to another; the two files can be put on separate monitors. These two basic operations may not seem the most exciting tasks, but in fact, they take so much time from us. 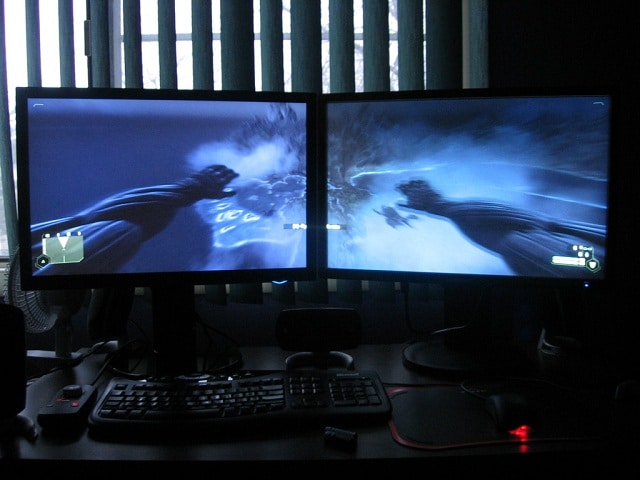 Online games represent one of the most successful businesses at this time; they are played by millions of people that are paying monthly subscriptions. The majority of games have the capability to be played on multiple monitors in order to offer a better experience.

Offline games can do the same; strategy or simulator games are the most appropriate for doing this. Only imagine that you could set to view a map on a monitor and the battle on the other for a strategy game, or better, to create bigger panoramic views for your flight simulator.

Video and picture editing programs have lots and lots of different tools that seem a little overcrowded on a single display. Having two monitors revolutionizes the whole way of your work because you’ll be able to organize the placement of everything by yourself.

For instance, you could set it to show all tools and functions on one screen and to work directly with the file on the other. This is also a big thing for CAD applications too, because the organization ways are endless, letting you express in conformity with your needs.

How many times have you wanted to see a football game or a movie, but you had to stay at your desk, working or doing something else? Your TV wasn’t near, so you had to watch it on your computer, but unfortunately, there wasn’t so much space on your screen, so you had to minimize the window.

With two monitors, you can continue doing your job and set the TV program to be on the other monitor. When you hear something interesting that’s on TV, just look at the monitor where the TV is running so that you’ll not have to swap between applications/actions continuously.

With two monitors, it can be very easy to compare different things, placing one on the first monitor and the other on the second. You can verify the characteristics of two devices you want to buy or compare a photo after it was edited with the original one.

In fact, you can do many things with two monitors, and in my opinion, the best capability is to run two different applications on full screen.

After reading the advantages, follow the second part of the article, which will explain how to configure your settings to run with two monitors, depending on the operating system used. Note that I consider you already connected your monitor to your graphic card through an available port.

Related: How to use Any smartphone as a Secondary Display on Windows

How to set-up dual monitors on Windows 7 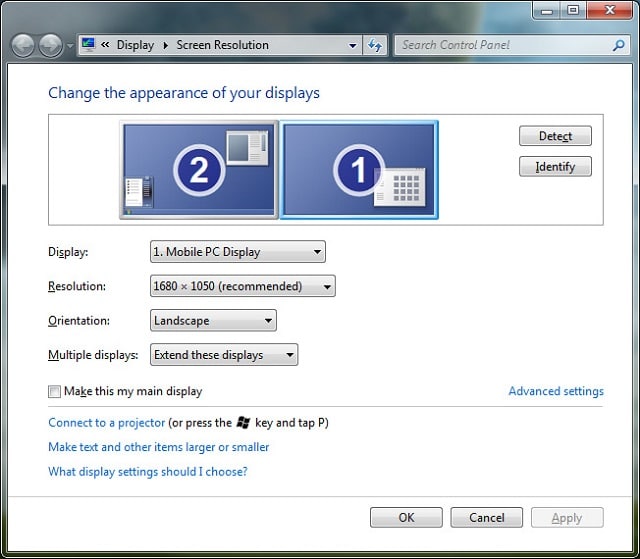 Setting an extra monitor when using Windows 7 is very simple; after you connect the screen through an open port, follow the next simple guide to configure it:

How to set-up dual monitors on Windows 8 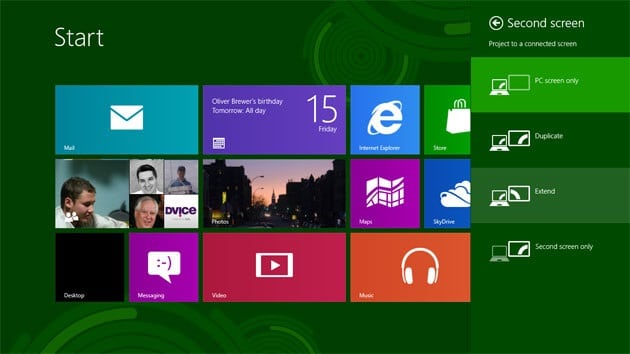 The new operating system made by Microsoft, Windows 8, was launched last year with a great number of new features. The biggest change was the absence of the Start button, a change that was not so agreed upon by users. On that account, this version of the popular Windows is not so cheered by many fans, and that’s why developers are trying to fix up their mistakes with upcoming updates. Mistakes or poorly integrated features can also be sensed when working with a dual-monitor system.

Setting up the second monitor on a Windows 8 computer can be done in two ways: the first follows the same steps as the one from Windows 7, and the second one is available only on this version:

For more settings, such as the resolution of the screen or its position, right-click on your desktop and select “Screen resolution,” where you’ll find all the options you need. 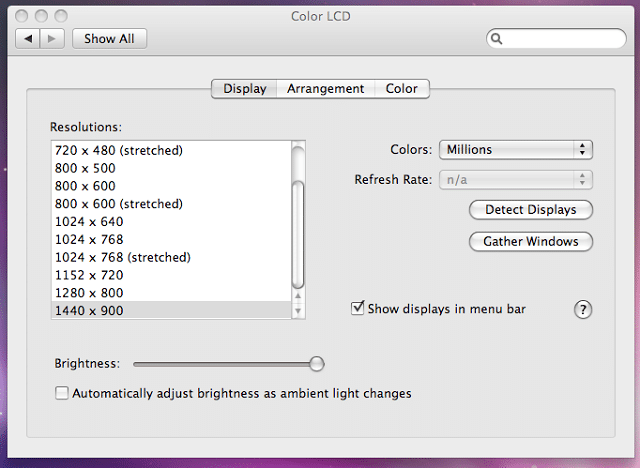 When you want to connect a second display to your Mac, please check the documentation before you buy another monitor, because not every Mac supports multiple screens. If everything is checked and you just plugged it in, follow the next steps to know how to configure it:

Even if you have an older Mac which doesn’t have an extra port on the graphic card, don’t despair because there are some USB solutions. For example, Targus USB 3.0 SuperSpeed Dual Video Adapter can be bought for $99 and it’s able to quickly connect up to two external monitors to your laptop. 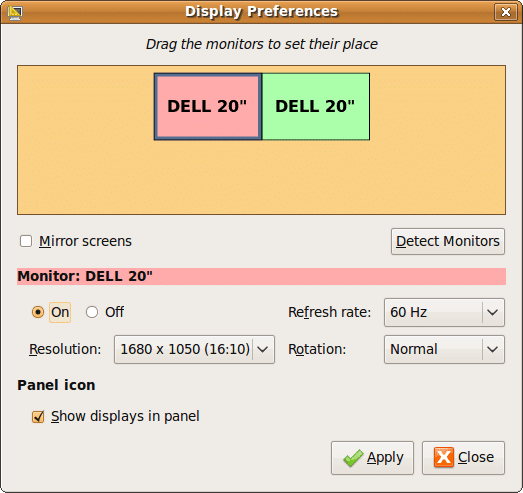 Ubuntu is the Linux-based operating system that is the most popular Linux distro among personal computers, servers and cloud computing. Maybe many of you are using this OS on your computers, and you want to add an extra monitor to them, so follow the next simple tutorial to discover how to do it:

Before buying a new monitor it’s wise to verify on Ubuntu’s forums to see if the driver of your video card supports another monitor. If everything is checked, all you have to do is to purchase that second screen.

An interesting fact is that on the market you can find even a laptop with two monitors. Believe it or not, but there were n some laptops launched with two built-in monitors on the market, such as Lenovo ThinkPad W700ds, green SpaceBook or Toshiba’s E-book reader.

All in all, the best things about the second monitor are the increased productivity and add a better sensation when using them with the extended option.

Everything is nice with two screens, but there are some things that will create discomfort, such as the taskbar that is shown only on the first display on Windows, the incapability to maximize a window on both of the screens, and so on. That’s why we will also present some applications that permit you to unlock the full potential of multiple monitors. 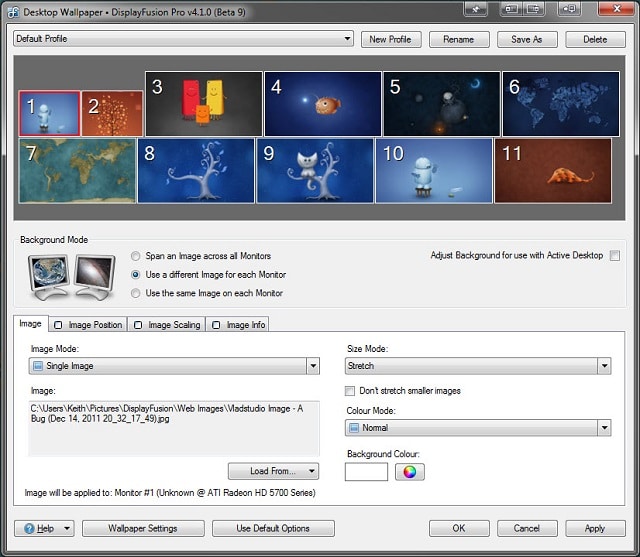 Display Fusion is an application designed and developed to make your life easier when using multiple monitors on Windows Vista, 7, or 8. It has powerful features that will ease your job and make your experience much better, features such as Window Management or Easy Administration.

Basically, it allows customizing each monitor separately. Thanks to its Multi-Monitor Taskbars feature, users can easily organize and configure a taskbar to be shown on each of their monitors. In addition, it permits you to add different wallpapers and screensavers on each monitor or to span them through all of your screens.

This little application can even do more because it can work on as many monitors as your computer supports, and it’s available in dozens of different languages. The most interesting thing about it is, in my opinion, the possibility to change the logon background to your Windows. Now you are able to swap that boring blue image with one of your favorite pictures or even with an online provider that is supported by the program.

All in all, this is a complex application, but with a friendly user interface that can be tried for 30 days before buying it. After, if you are pleased with its abilities, you will have to choose one of the pricing plans that start from $25.

Another application that can help you when using multiple monitors on Windows is UltraMon. This application can do wonders to your screens, such as quickly moving windows between monitors, adding custom buttons to the window menu of applications, maximizing windows through all screens, and so forth.

It was designed to increase productivity by letting you add taskbars on each monitor. Two modes are supported by the app: standard and mirror. While the mirror shows all tasks that are ongoing, the standard mode only shows applications that are performing on that specific monitor.

Another big improvement added to your multiple monitor experience is the ability to set different wallpapers for every screen or to create a gradient background, from the first monitor to the last one. Moreover, you can have different screensavers on each monitor, or you can choose to blank the secondary ones while it’s running on the first monitor.

In conclusion, this program is a real help when using multiple monitors. A single license for UltraMon is $39.95 and if you are planning to use this application on more computers, check the pricings here. 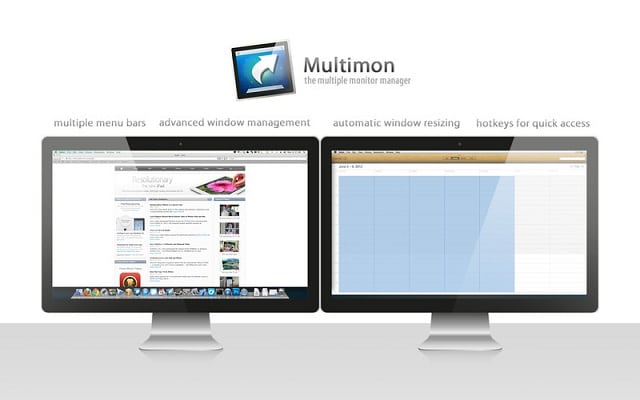 Multimon is an application that is the equivalent of UltraMon or DisplayFusion for Mac OSX users. It’s a good utility program that adds multiple features to ensure that they’ll not get lost between different screens.

This program lets to add the menubar on every monitor that is connected to your computer and the possibility to configure the hotkeys to move windows between screens quickly. It’s very interesting that when you move windows, this application automatically resizes them so that they will match the monitor’s resolution.

Unfortunately it doesn’t have other big features like the Windows apps, but for Mac OSX users this program represents one of the best choices they have. Multimon is available on iTunes for $9.99. 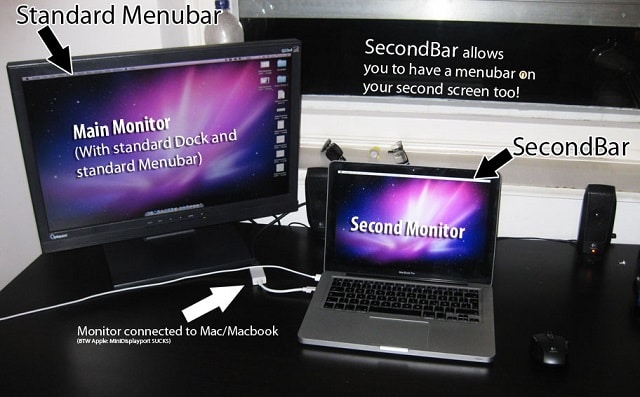 Secondbar is an application for Mac OSX you should also take a look. It’s a small program that is very useful when connecting your computer to a second monitor as it will increase your productivity and workflow. As the name says, it allows adding and customizing menubars on your other connected monitors. The bad thing is that it doesn’t have other configurable settings, but it’s free for download.

Was this article helpful?
YesNo
TechPP is supported by our audience. We may earn affiliate commissions from buying links on this site.
Read Next
How to Upgrade from Windows 7 or 8 to Windows 10 for Free in 2020
#dual-monitor #mac os x #Ubuntu #Windows 7 #windows 8