One look at the smartphone options available in India, especially Android-based ones, reveals how the phablet segment has grown. Samsung may have started it all with the original Galaxy Note, but a quick online search throws up a slew of phablet options across price bands that are now crowding shelves on both online and brick-and-mortar stores. To reiterate, our definition of a phablet is any device that lets one make calls and sports a screen sized between five and seven inches. The Samsung Galaxy Note 3 is the latest high-end contender in this space, while other recent devices of note (pun unintended) include the likes of the Lenovo K900, the LG Optimus G Pro, the Sony Xperia Z Ultra and the Samsung Galaxy Mega 5.8 and 6.3. 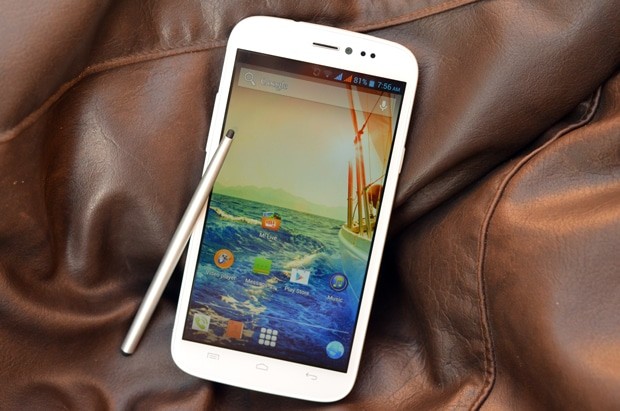 Micromax did have an offering in the phablet space, the 5.3-inch Canvas Doodle, and has just given it a major refresh with the Doodle 2. While the dual-SIM phablet’s mainstay is its humungous 5.7-inch display, it also brings a few features never seen on Micromax phones before — an aluminum casing for example. Let’s get up close and personal with the Doodle 2, shall we? 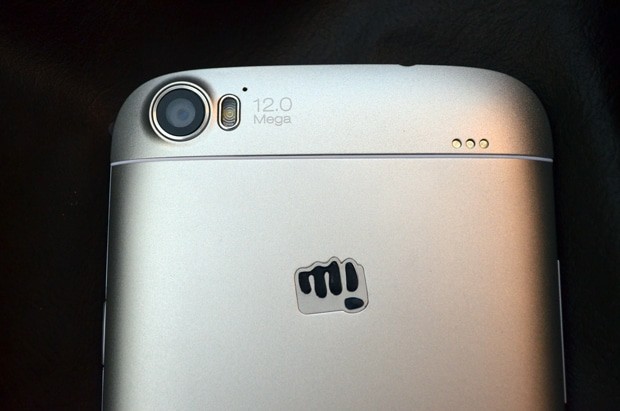 When we reviewed the Canvas 4, we said it’s the most well-built device from the Micromax stable. However, the Doodle 2 trumps the Canvas 4 and is the new king of build as far as Micromax is concerned. In terms of looks, the Doodle 2 doesn’t vary drastically from the bog-standard candybar design, but it does sport a rear largely fashioned from aluminum. The front is almost all-screen and has a white bezel, with three capacitive touch keys at the bottom, and the usual assortment of earpiece, front camera, sensors and notification LED at the top. The rear is finished in silver and is divided into the three parts, with the large middle portion boasting a metal construction.

The top and bottom parts are plastic, but have been given the same silver finish to give it a full aluminum look. The top comes off to reveal the pair of SIM slots — note that the battery is non-removable and there’s no memory expansion slot. A circular camera lens juts out on top left, and is accompanied by the LED flash and the secondary microphone. The glass covering the camera could be prone to scratches since the device rests on it when lying on a flat surface. Then there’s a Micromax logo, a sicker with regulatory and identification info and more branding, and the speaker closer to the bottom. The volume rocker is placed on the left of the device, the power key on the right, 3.5mm audio socket on top and the microUSB port at the bottom.

Overall, it isn’t really something that would stand out, but the use of aluminum and its large size might just help you draw attention. As with any phablet out there, this is a large device and one-handed use could be a bit of a problem unless you’re blessed with paws instead of hands.

The IPS LCD 5.7-inch display on the Doodle 2 rocks a resolution of 1,280 x 720 and offers a pixel density of 258 ppi. In terms of quality, we don’t have any gripes with it — it’s crisp, vibrant and displays colors well. The viewing angles are good too and no complaints as far as sunlight visibility is concerned. 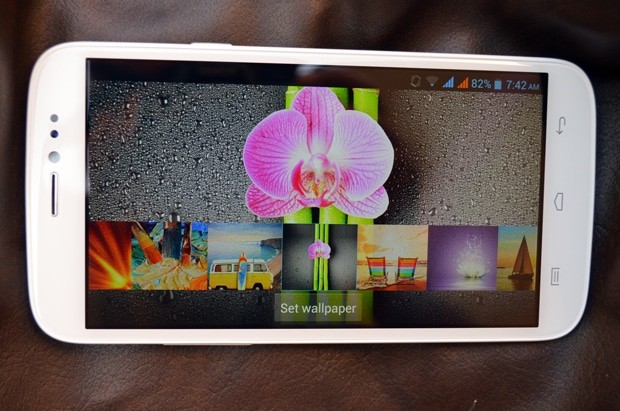 As with the Canvas 4, perhaps our biggest issue with the screen is that it isn’t full HD and since quite a few rivals have moved on to 1080p displays, it’s time for Micromax to do that as well, especially on its high-end devices.

The Doodle 2 doesn’t skimp as far as the cameras are concerned, and as with the Canvas 4, stays current with the megapixel count seen on most flagships these days. While the front snapper is the same fixed focus 5-megapixel affair we saw on the Canvas 4, the rear camera drops slightly to a 12-megapixel sensor against the Canvas 4’s 13-megapixel shooter. Of course, that may not really be a deal breaker. What’s more important is the image quality, and that’s at par with what the Canvas 4 offers. 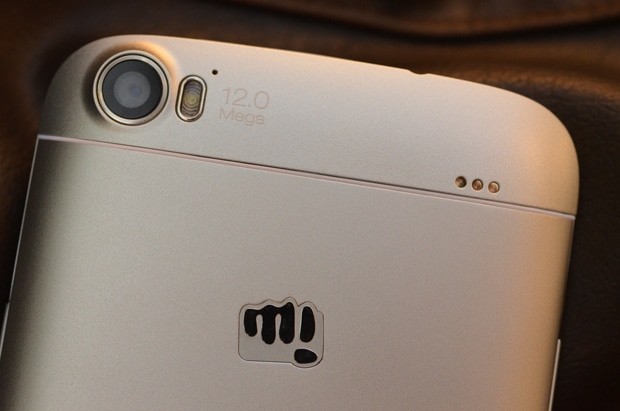 The UI and the features are also pretty similar — so you get control over settings such as ISO, white balance and exposure, a range of modes including HDR, smile shot and burst mode, scene presets and video filters. In terms of image quality, the Doodle 2’s shooter is capable and delivers decent results in good lighting conditions. As the light levels go down, so does the image quality, and suffice it to say that we won’t be counting on it as our primary shooter in low light. The camera is capable of shooting full HD videos, and again, the quality matches its still image performance. The camera keeps hunting for focus, and you may notice this in the videos.

Software-wise, the Doodle 2 mimics the Canvas 4, and as such, offers a near-stock taste of Android 4.2.1. For a more detailed overview, you can refer to the software section in our Canvas 4 review. The slew of new software features we saw on the Canvas 4 are all there, including pop-up browser, ‘pause on look away’, video pinning and proximity call… and so are the preloaded apps including M! Security powered by NQ Mobile, hike Messenger, Kingsoft Office, Foneclay, Mi! Zone and M! Live. 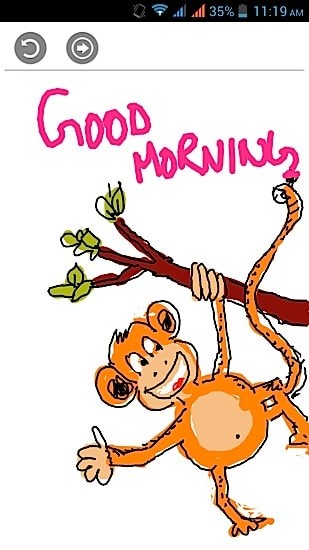 Micromax has also thrown in Evernote and Skitch, along with trial versions of a few games such as NFS Shift and The Darkman. M! Unlock, the app that powers Micromax’s ‘blow to unlock‘ feature is also around, and therefore, you can use this cheesy cool (depending on what you feel about it) feature to gain access to the device if you wish. Since doodling is one of the mainstays of this device, M! Doodle, a drawing and doodling app is also on board and complements the bundled stylus. The app requires a one-time registration over SMS, and then allows you to share your creations with other users of the app via a built-in chat feature. A video app called Movie Studio is also on board.

The Micromax Doodle 2 is powered by a quad-core MediaTek MT6589 chip purring at 1.2GHz, aided in its efforts by 1GB of RAM and PowerVR SGX544 graphics. These are the exact same specs we’ve seen in the Canvas 4 and the Canvas HD before it, and therefore, don’t make us go wow with excitement. 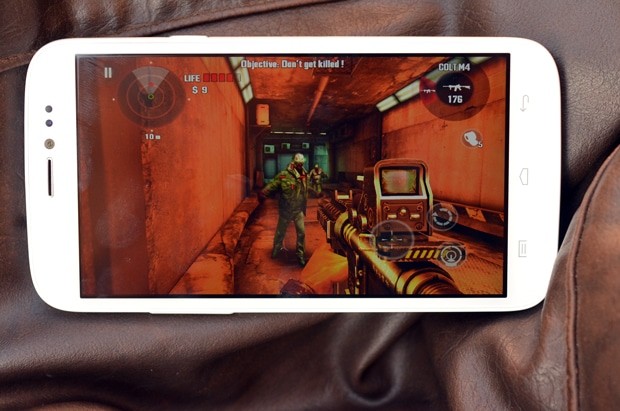 That said, these are perfectly capable specifications and make the device run smooth, without any sign of performance hiccups. Games such as Temple Run 2 play smoothly, even heavy ones such as Riptide GP2 and Dead Trigger. Internal storage is 16GB, a little over 12GB of which is available. However, as we mentioned earlier, there’s no way to expand that unless you make use of the USB On-the-Go functionality via an adapter. Other connectivity options cover the usual Wi-Fi, A-GPS and Wi-Fi Direct. Call quality is good and the speaker output is adequate. The sealed 2,600 mAh battery packs in enough juice to see you through a workday with ease — no nasty surprises there.

The Micromax Doodle 2 gives us a sense of deja vu, and this isn’t really a good thing. It’s not unreasonable to expect better specs from a new device as compared to a brand’s previous offerings, and this is where the Doodle 2 disappoints to some extent. While the large screen is definitely its hero feature and the better build quality is certainly welcome, it doesn’t offer an upgrade in terms of the processor and screen resolution when stacked against the Canvas 4 and the Canvas HD. However, these could be mere gripes, and may not really affect your decision if you choose to buy this phablet. 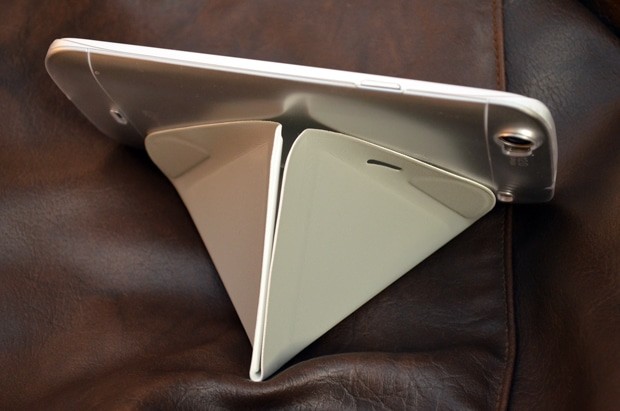 The Origami-style flip cover included in the pack is a useful addition, and so is the double-tipped stylus. The latter seems to have been provided more as an afterthought, since the the device doesn’t have a silo where the stylus can be stowed away when not in use. Even the flip cover doesn’t provide an option to attach or store the stylus in any way, and therefore, it can be misplaced quite easily. Another thing to consider is that capacitive styli are available for cheap these days, so you could opt for any large-screened smartphone (such as the very compelling Lenovo K900), get yourself a stylus and download a few doodling apps… and the resulting combination may work out better when compared to the Doodle 2.

On the other hand, at a price of Rs 19,990 (~ $320), the Micromax Doodle 2 isn’t a bad option at all and can certainly meet your needs if you’re looking for a relatively affordable phablet with a sturdy build and one that offers a reasonable performance as far as the usage, camera and battery life are concerned. We may be playing both sides here, but the choice will eventually boil down to your brand preferences, the features you’re looking for, and the thickness of your wallet.

Dear Micromax, Welcome Back...But Can We Talk of the Phones,…
Micromax makes a comeback with the launch of IN Note 1 and…
Micromax 2.0: First Impressions - All Product, No "Cheeni"!
Micromax's IN a Red(mi), Real(me) World - no longer just…
Black Shark 2 Review: Better Gaming...in Verse
Samsung Galaxy M40 Review: The M in the Middle?