A few months back, many followers of the smartphone race didn’t even hear about Xiaomi but now the company is on everybody’s lips. The Chinese company has witnessed a spectacular growth and of the reason is the fact that the company has accustomed its audience with fresh new product launches.

The company has now announced on its forums that it is holding a product launch event on January 15th in Beijing, which is next week. Since Xiaomi has hinted that it is unveiling a new flagship smartphone, most of us are expect the Mi 5 to be announced – the successor to the already popular Xiaomi Mi4. As a matter of fact, we were expecting the device to be announced at this CES edition, but it seems that the event will take place in Beijing. 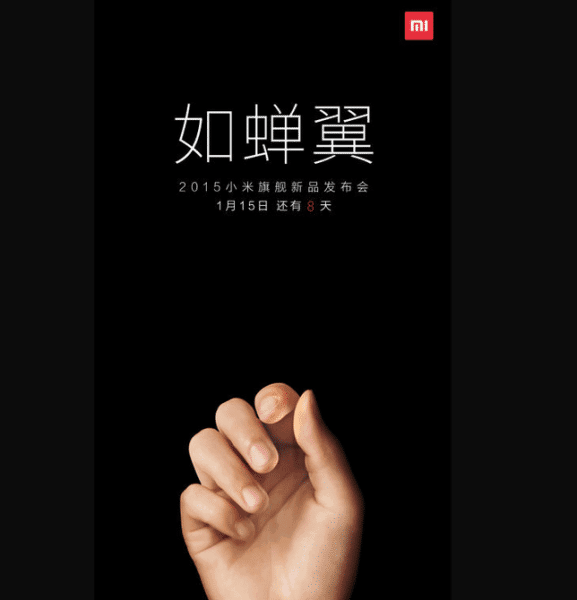 And now we have fresh leaked technical data coming from the NowherEelse.fr website, which says the Mi 5 could be super thin. The leak says the metal uni-body construction belongs to the Mi 5 and is just just 5.1mm thin. To put this into a different perspective, the world’s thinnest smartphone, the Vivo X5 Max is just 4.75 thin, so the upcoming Xiaomi Mi4 could be almost just as thin.

As a matter of fact, Xiaomi representatives actually said the following in the same forum thread where they made the announcement, hinting to the ultra-thin profile

New flagship product? What does it look like? What is it as thin as cicada’s wings?

Not so long ago, Lei Jun, CEO of Xiaomi, also announced via Weibo that the company is preparing to introduce its next flagship device during January 2015. The same French publication says the Mi 5 will have a 5.2 inch display, which is in contradiction with previous rumors that have suggested a 5.7 inch display. It’s also interesting to observe that the official MIUI Facebook account said the following:

Guess what new product(s) will be launched?

So, if the “(s)” has been put there on purpose, it could mean that Xiaomi is getting ready to launch more than one product. There have even been voices saying that Xiaomi could release the Mi 5 and the Mi 5+, one with a 5.2 inch display and one with a 5.7 inch display. So this could explain the discrepancy in the display size of the smartphone. As for other specs, here’s a possible list:

On another note, Xiaomi’s Redmi Note 4G handsets with 4G are going to be available through Bharti Airtel’s 133 stores in India which span across six cities in India. This is a pretty important step for the Chinese company as it looks to attract more customers from the offline retail space, as well, after a while when its operations have been online.

Was this article helpful?
YesNo
TechPP is supported by our audience. We may earn affiliate commissions from buying links on this site.
Read Next
What is UPI Lite and How to Enable it on Any Device [2022]
#india #xiaomi